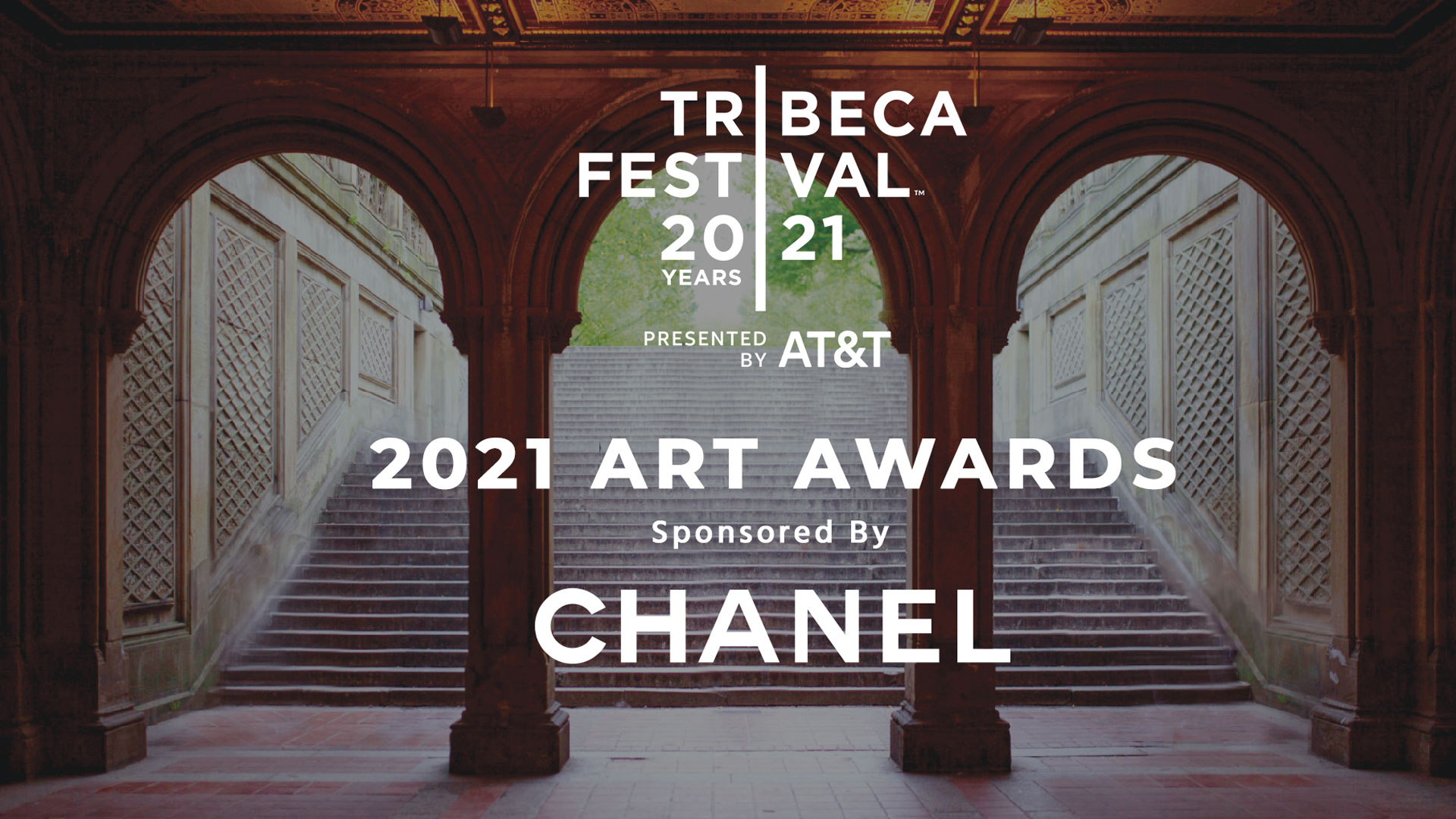 Each year Tribeca and CHANEL bring together world-class artists who donate a piece of their work to be presented as an award to honored Festival filmmakers, a tradition since the Festival’s beginning. The 2021 Tribeca Film Festival Art Awards, presented by CHANEL, features the work of one artist returning to support the program for his 20th year in addition to nine other artists who were personally selected by this year’s curator and notable gallerists, Vito Schnabel. 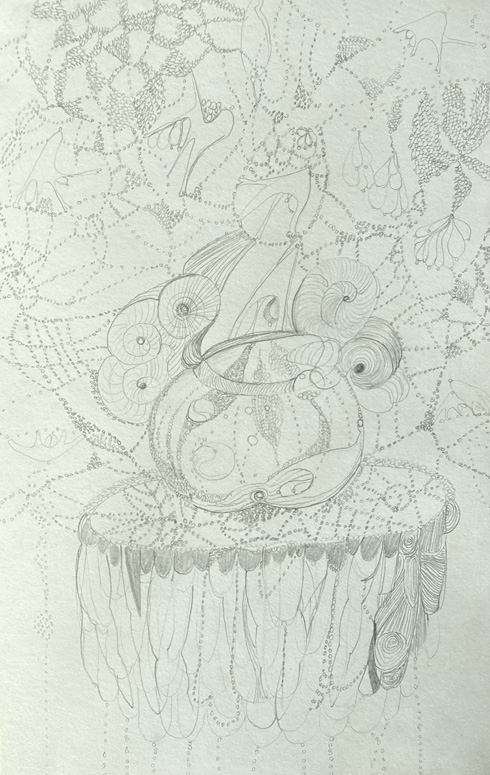 Born in St Louis, Missouri, Berger was educated at NYU, the Art Students League and New York Academy of the Arts. She has shown her work everywhere from the Rubin Museum in NY, Paul Kasmin Gallery, the American Consulate in Istanbul, and the US Embassy in Laos. Her public sculptures are in parks throughout the USA. Longtime resident of the Chelsea Hotel, she previously lived in Paris and Italy and currently divides her time between Manhattan and Argentina.

Influenced by a lifetime of travel to some of the most remote parts of the globe, Berger's paintings and drawings are both a reflection of the visual richness of these experiences and a space to pause. Here, the world's fecundity is both marked yet stilled. As Berger's process is a slow and ritualistic one, the work likewise demands the viewer's quiet concentration, gift of time, and a willingness to listen to their silence. 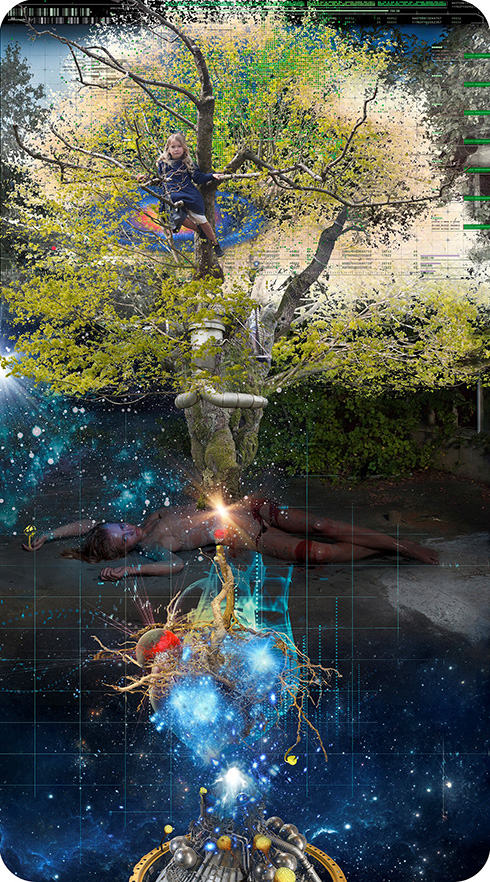 Boody is a pivotal image from her ongoing series, PsycheSuperStar. Boody has long been fascinated by the mystery of how human beings evolve. Her work revolves around this underground process, exploring the link between trauma and massive change. One of the first photographers to use digital photography effectively, her complex photographs depict young subjects engaged in this challenging journey of becoming. In addition to her art practice, she is currently working on projects involving experiential art and the healing of trauma.

Recent shows include “Radical Terrain” at the Rubin Museum, NYC “Magical Realism” at the Houston Center for Photography and “Fairy Tales, Monsters and the Genetic Imagination” at the Frist Center for Visual Art. Her work is in the collections of the Whitney Museum of American Art, The Herbert F. Johnson Museum of Art at Cornell University and The Musuem of Old and New Art (MONA). 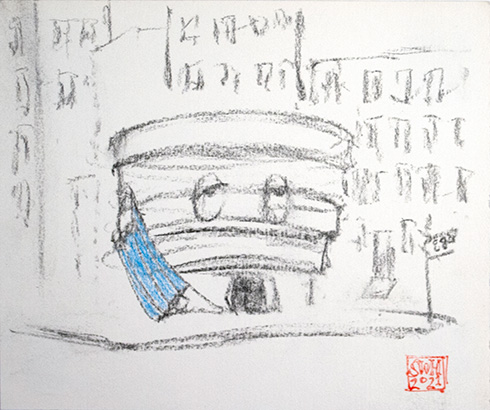 Stephen Hannock is an American luminist painter known for his atmospheric landscapes and incendiary nocturnes. The artist has demonstrated a keen appreciation for the quality of light and for the limitations of conventional techniques for capturing it. His experiments with machine-polishing the surfaces of his paintings give a trademark luminous quality to his work. The larger vistas also incorporate diaristic text that weaves throughout the composition. His design of visual effects for the 1998 film What Dreams May Come won an Academy Award.

His works are in collections worldwide, including the Whitney Museum of American Art, The National Gallery of Art in Washington, and the Yale University Art Gallery.

Hannock's painting of the Connecticut River Oxbow was chosen for inclusion in the recently published Metropolitan Museum of Art, Masterpiece Paintings. As well, Hannock and frequent collaborator Sting are the contemporary annex to the recent exhibition at the Metropolitan Museum of Art entitled, Thomas Cole's Journey, Atlantic Crossings. This event coincided with the publication of their long awaited compendium of lyrics, woodcuts, and original paintings from Two Ponds Press. 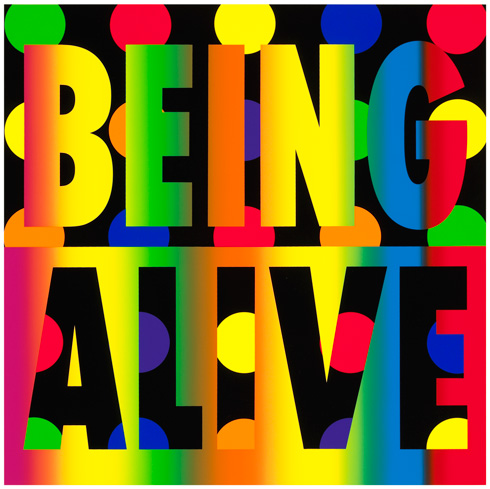 Kass’s work has been shown nationally and internationally including at the Venice Biennale, the Istanbul Biennale, and the Museum Ludwig, Cologne. The Andy Warhol Museum presented "Deborah Kass, Before and Happily Ever After, Mid- Career Retrospective” in 2012, with a catalogue published by Rizzoli. Her monumental sculpture OY/YO became an instant icon and is now permanently installed in front of the Brooklyn Museum and the Cantor Arts Center at Stanford University.

In 2018 Kass was inducted into The National Academy. In 2014 Kass was inducted into the New York Foundation for the Arts Hall of Fame. She was honored with the Passionate Artist Award by the Neuberger Museum in 2016 and was the Cultural Honoree at the Jewish Museum in 2017. She serves on the boards of the Sharpe Walentas Studio Program and the Andy Warhol Foundation for the Visual Arts. She is represented by the Kavi Gupta Gallery in Chicago. 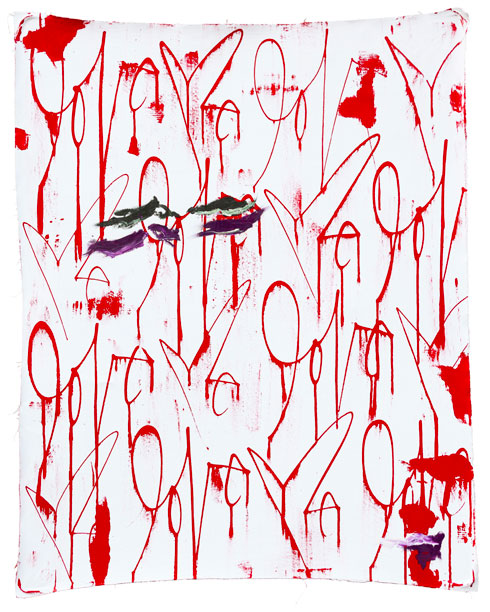 Artist Curtis Kulig lives and works in New York City. A decade ago, his private plea imbued with futility and irony, ‘Love Me' became part of the urban fabric of the city. A loyal audience ensued recasting the declaration embracing inclusivity, optimism, and hope. His studio practice consists of paintings and drawings often done in series which explore his (and thusly ours) emotional vulnerabilities.

He has been featured in the New York Times, Vanity Fair, and The Wall Street Journal and is a frequent contributor of works to cultural and charitable auctions including Aspen Art Crush, Free Arts, the Tibetan Fund, and Parlay for Oceans amongst others. Upcoming projects include a solo show of his Love Me Tondo series titled "Love, or something like it." at Kantor Gallery in Los Angeles, a signing of his book Loud Money with famed poet Max Blagg in New York City, and as a contributing artist to the 2021 Tribeca Film Festival presented by Chanel.

Photographer Jeff Chien-Hsing Liao’s View from Tribeca is a site-specific digital photograph commissioned by the Citigroup at 388 Greenwich Street. Liao creates highly detailed, large-scale panoramas of social and urban landscapes. His finished images are woven together from multiple images over a span of time. 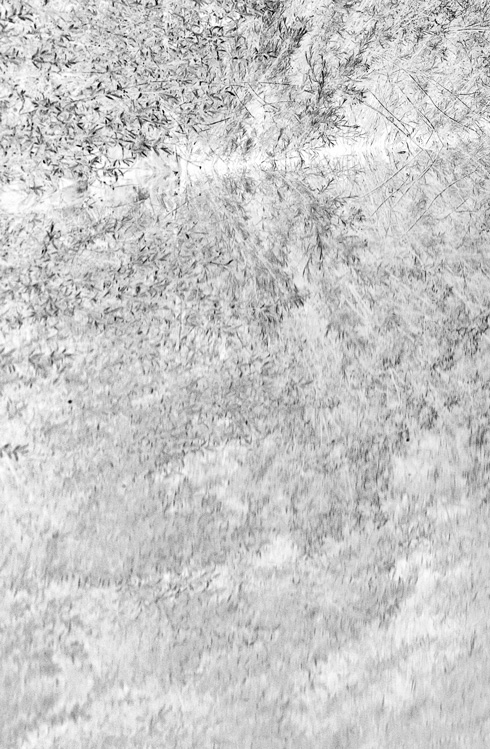 Clifford Ross was born in New York City in 1952 and graduated from Yale University in 1974, where he received a B.A. in Art and Art History. He began his career as a painter and sculptor, and in 1994 became deeply involved with photography and other media. His singular goal has been to create work that relates to the sublime in nature. Using both realistic and abstract means to achieve his goals, he often develops radically new approaches to existing media. Harmonium Mountain, Ross’ computer generated video with an original score by Philip Glass, was presented at the Tribeca Film Festival in 2011. 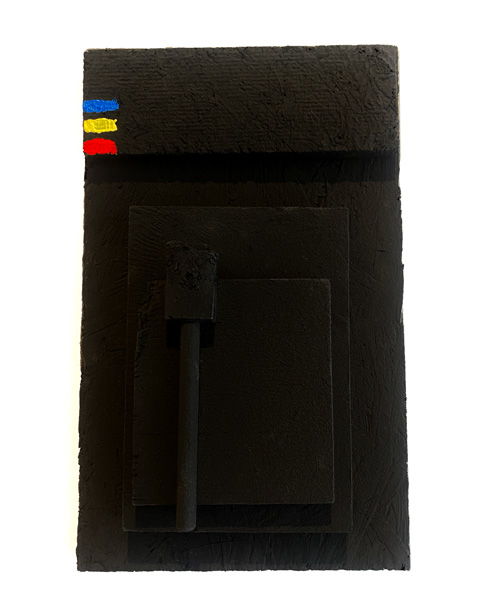 Widely recognized for his sculptures and public art installations, Will Ryman’s work is filled with an acute theatricality that harkens back to his early career as a playwright. The artist’s ongoing interest in literature, philosophy, and the Theatre of the Absurd manifests in his playful investigation of the folly of existence and our shared search for meaning and resolve. Material and subject are of equal importance for Ryman, whose work reveals his intuitive approach to sculpting diverse materials into expressive forms that examine essential aspects of the human experience.

Ryman’s work can currently be seen on view at LongHouse Reserve, East Hampton, NY and Art Omi, Ghent, NY. The Situation Room, a life-size installation related to a historical moment in the Obama Administration, will be included in the 2021–2022 exhibition season at The Margulies Collection at the Warehouse, Miami, FL.

The artist was born in New York City in 1969 and since 2003 he has worked in a studio on the Bowery. 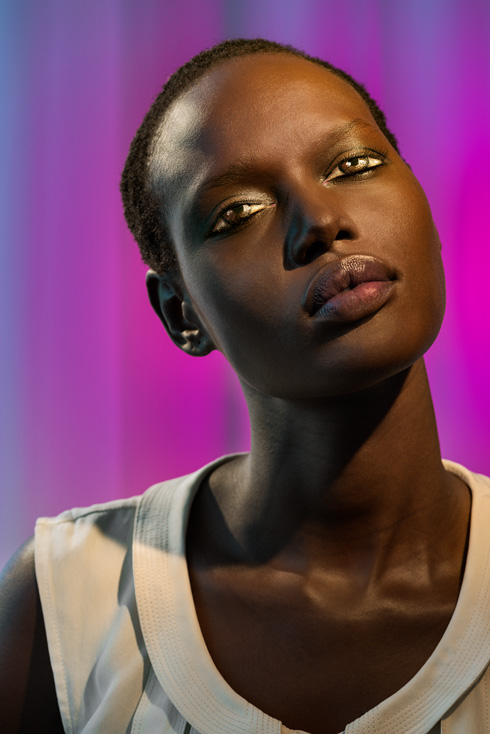 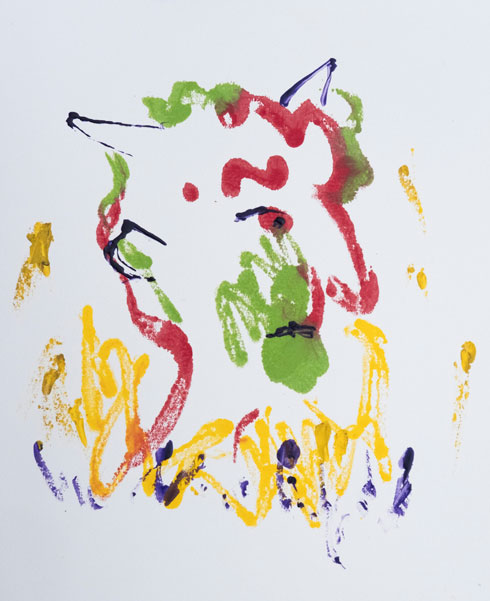 Gus Van Sant (b. 1952, Louisville, Kentucky), admired internationally as a filmmaker, painter, photographer, and musician, received his BFA from the Rhode Island School of Design in Providence in 1975. Since that time, his studio painting practice has moved in and out of the foreground of a multi-disciplinary career, becoming a priority again over recent years. Van Sant’s work in different mediums is united by a single overarching interest in portraying people on the fringes of society.

Van Sant’s work has been the subject of solo exhibitions at the Musée de l’Elysée in Lausanne, Switzerland, Le Case d’Arte in Milan, Italy, the Jordan Schnitzer Museum of Art at the University of Oregon in Eugene, and Vito Schnabel Gallery in New York. He has participated in numerous group exhibitions since the 1980s, presenting drawings, paintings, photographs, video works, and writing. Among Van Sant’s many internationally acclaimed feature films are Milk (2008); Elephant (2003); Good Will Hunting (1997); My Own Private Idaho (1991); and Drugstore Cowboy (1989).

CHANEL is a private company and a world leader in creating, developing, manufacturing and distributing luxury products. Founded by Gabrielle Chanel at the beginning of the last century, CHANEL offers a broad range of high-end creations, including Ready-to-Wear, Leather Goods, Fashion Accessories, Eyewear, Fragrances, Makeup, Skincare, Jewellery and Watches. CHANEL is also renowned for its Haute Couture collections, presented twice yearly in Paris, and for having acquired a large number of specialized suppliers, collectively known as the Métiers d’Art. CHANEL is dedicated to ultimate luxury and to the highest level of craftsmanship. It is a brand whose core values remain historically grounded on exceptional creation. As such, CHANEL promotes culture, art, creativity and “savoir-faire” throughout the world, and invests significantly in people, R&D and innovation. At the end of 2019, CHANEL employed more than 27,700 people worldwide.