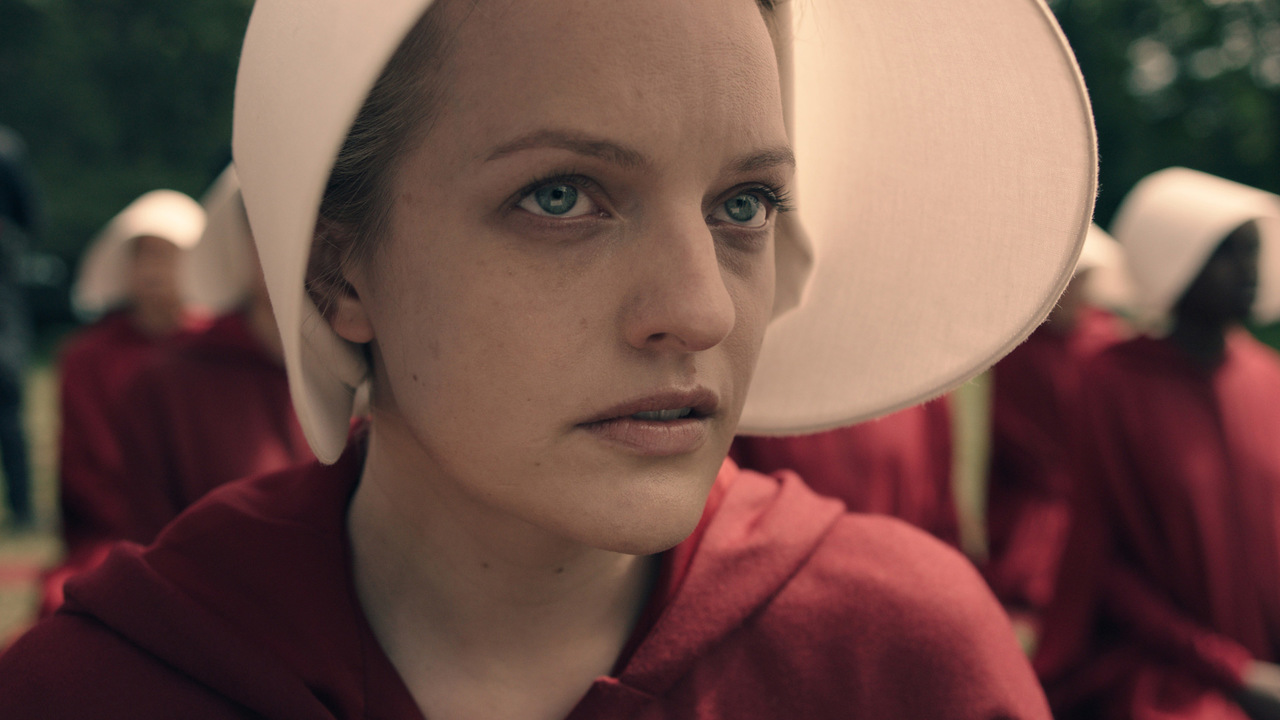 Drama
Based on Margaret Atwood's acclaimed novel, The Handmaid’s Tale is the story of Gilead, a modern-day totalitarian society facing environmental disasters and a plunging birthrate, ruled by a fundamentalist regime that treats women as property. As one of the few fertile women, Offred is forced into sexual servitude in a desperate attempt to repopulate the world. In a society where one wrong word could end her life, Offred has one goal: survive and find the daughter taken from her.

Samira Wiley is best known for her SAG Award winning performance as inmate Poussey Washington on Orange is the New Black. Wiley’s upcoming projects include Hulu’s original drama series The Handmaid’s Tale and the independent film F*cking People. Past film credits include 37, Nerve, Rob The Mob, Being Flynn and The Sitter. Television credits include recurring roles on You’re the Worst and Unforgettable as well as appearances on The Catch, Law & Order: SVU and Person of Interest. Wiley also starred in the Off-Broadway play "Daphne’s Div"e, directed by Thomas Kail (Hamilton). She is a graduate of The Julliard School.

Alexis made her television debut in the critically acclaimed series Gilmore Girls as Rory Gilmore. She recently reunited with the cast for Gilmore Girls: A Year In The Life, which includes four 90-minute chapters, each spanning one of the four seasons: Winter, Spring, Summer and Fall. Alexis is currently starring in The Handmaid’s Tale as Ofglen. She can be seen in a variety of films including The Sisterhood of the Traveling Pants, The Conspirator, Sin City and Tuck Everlasting. Alexis also made a memorable guest appearance as Beth Dawes on Mad Men.

Yvonne Strahovski stars in Hulu’s The Handmaid's Tale. Upcoming films include Shane Black’s The Predator, Dennis Iliadis’ He's Out There, and Marc Forster’s All I See Is You. Past TV credits include Showtime’s Dexter, NBC’s Chuck, ABC’s The Astronaut Wives, and FOX’s 24: Live Another Day. Yvonne recently starred in Lionsgate’s Manhattan Night and I, Frankenstein. Other film credits include Killer Elite alongside Jason Statham and Robert DeNiro, The Guilt Trip with Barbra Streisand, and I Love You Too.

O-T Fagbenle is currently shooting The Handmaid’s Tale for Hulu opposite Elizabeth Moss and Joseph Fiennes and he can also be seen in The Five on Sky TV. On stage, he starred in Olivier Award- winning, “Ma Rainey's Black Bottom” at The National Theatre and received an Evening Standard nomination for Best Actor. Recently, O-T starred in the critically acclaimed movie adaptation of Zadie Smith's novel, NW. Fagbenle's vast prior credits include the title roles in the BBC's miniseries Walter’s War and series The Interceptor. He is also recognized as Frank on HBO's Looking.

Max Minghella is a British actor & filmmaker currently starring in Hulu’s series The Handmaid’s Tale. Minghella will make his directorial debut in 2018 with Teen Spirit starring Elle Fanning. He was recently seen in Into the Forest and has a recurring role on The Mindy Project. Other acting credits include: The Ides of March, The Internship, The Social Network and Agora. Minghella’s screenwriting debut, The 9th Life of Louis Drax was released this past fall. Minghella’s producing credits include Drax, Sony’s upcoming How to Disappear... and Working Title’s The Two Faces of January.

Warren Littlefield is the Executive Producer of The Handmaids Tale starring Elisabeth Moss. He is also the Executive Producer of Fargo, which has garnered him multiple Producers Guild Awards and an Emmy®. Prior to his career as a producer, Littlefield was President of NBC Entertainment, the culmination of a 20 year career where he oversaw hits such as Seinfeld, Friends, Fraiser, Will and Grace, Mad About You, ER and Law and Order. The historic “Must See TV” era garnered NBC 168 Emmys®, a run that is chronicled in his New York Times best-selling book, “Top of the Rock.”

Elisabeth Moss is a Golden Globe®-winning and Emmy®-nominated actress starring in Hulu’s upcoming series The Handmaid’s Tale. Television credits include Mad Men, Top of the Lake and The West Wing. Upcoming films include The Bleeder, The Seagull, Mad to Be Normal and The Square. Her additional film credits include The Free World, High-Rise, Truth, Queen of Earth, Meadowland, The One I Love, Listen Up Philip, On The Road, Get Him to the Greek, and Girl, Interrupted. Moss earned a Tony® nomination for “The Heidi Chronicles”. Her additional theater work includes “Children’s Hour”, “Speed the Plow” and “Franny’s Way.”

Ann Dowd is an award-winning actress widely known for her performance in Compliance. Her other film credits include Captain Fantastic and Collateral Beauty as well as Our Brand Is Crisis, Bachelorette, The Drop, Side Effects, The Informant, Marley & Me, and Garden State. Her television roles include the upcoming series The Handmaid’s Tale and Good Behavior, in addition to her recent work on The Leftovers and Quarry. She has also appeared in Masters of Sex, Olive Kitteridge, The Divide, Freaks and Geeks and Nothing Sacred. She has been seen on Broadway in “The Seagull,” “Taking Sides” and “Candida."

Reed Morano ASC is the award-winning director of the pilot and episodes 2 & 3 of Hulu’s The Handmaid’s Tale. One of Indiewire’s 20 Best Breakthrough Directors of 2015, Reed earned an Independent Spirit Award nomination for her cinematography in her critically acclaimed directorial debut Meadowland starring Olivia Wilde and Luke Wilson. In addition to The Handmaid’s Tale, Reed directed the season 2 premiere of Billions for Showtime and Halt and Catch Fire for AMC. Reed can next be seen directing the feature I Think We’re Alone Now with Peter Dinklage and Elle Fanning.

Madeline Brewer made her television debut as Tricia Miller in the Netflix original comedy-drama series Orange is the New Black. Next, she recurred as Miranda Cates on Eli Roth’s Hemlock Grove also for Netflix. Most recently she starred in an episode of Netflix’s Black Mirror opposite Malachi Kirby and Michael Kelly, and in the Brett Easton Ellis– directed series The Deleted for Fullscreen. Upcoming credits include starring roles in The Handmaid’s Tale for Hulu, and in indies Flesh and Blood opposite Mark Webber and Hedgehog with Ann Dowd. Madeline has also guest-starred on NBC’s Grimm and CBS’s Stalker.