Workspace: We Invade the Offices of Ariel Schulman & Henry Joost of Supermarché

The directors of 'Catfish,' 'Paranormal Activity 4' and the upcoming 'The Monkey Wrench Gang' invite us in to their productivity-friendly office. 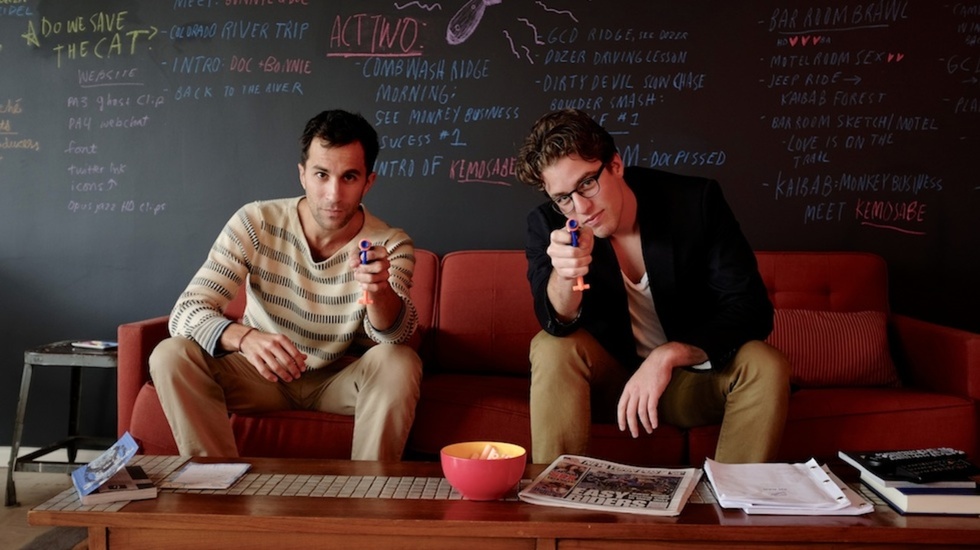 The first thing you notice when you walk into the current headquarters of Supermarché is an entire wall-cum-blackboard covered with the outline for the company’s current feature film project, an adaptation of Edward Abbey’s 1975 cult classic, The Monkey Wrench Gang. The next thing that catches your eye is the apartment’s sick view of Central Park. A slight tinge of envy washes over you and you think, “I could really get some work done here.” And that’s exactly what Ariel Schulman and Henry Joost, the directors behind the 2010 Sundance hit Catfish and the massively successful Paranormal Activity 3 and 4, are doing.

What’s the first thing you guys do when you move into a space?

What about the blackboard?

We’ve always had some big way to get ideas down and look at them. A lot of people lay out a feature script with cards. It’s more fun to do it with chalk.

Before here you guys were south of Canal on Broadway. Tell me about that space.

We called it the Diane Fink Film School, after the building's management company. Casey Neistat was there and then he got Nev [Schulman] to move in and then we came and knocked down a wall to make one large space. At one point Lena Dunham was there and the Safdie brothers, and our friend, the artist Carlton DeWoody. You could walk down the hall and see what everyone was working on. We were so bootstraps at the time that we needed an office that also served as a production studio. So many projects ran out of there including the shooting and editing of our first feature film, Catfish. We had a full wood shop in the corner, big screen t.v., a basketball hoop, ping-pong table...

Did you feel like you were in the movie “Big”?

Yeah, that’s always been the dream: Get that space! We got the trampoline later when we rented a house in LA.

How important was it to have a community of filmmakers around you?

It turned out to be very important. We shared equipment. We shared ideas. We challenged each other. It was like: What are the Safdies working on? Oh, shit! They’re about to finish a feature and they’re going to Sundance. Casey Neistat just made a radical short. We better step up our game. There was no animosity just healthy competition.

Are there any challenges or difficulties to sharing a work space?

No difficulties. We find an organizational method that we’ve developed together. Where’s the stapler? Where’s the 3-hole punch? Where’s the Supermarché stationery?

If you hadn’t moved into the studio with Nev, do you think you would have made Catfish?

Absolutely not. There was no intention to make the movie. He invited us to share the space with him. He had a different business doing photography. We weren’t really working together. We would just look over our shoulders and he would be like, “Guys, check this out.” And we would walk over. “Look what my internet girlfriend and family are up to.” And we were such addicted documentary filmmakers at the time, shooting constantly with small cameras, that we started rolling on it and saving all the footage. The story developed and twisted and we happened to have the last 8 months on tape.

How did you end up with the name Supermarché?

We’d like to think of ourselves as young and French, which is a website we own: youngandfrench.com. And we considered that. Also, Hot Glue. Woodshop. It became Supermarché because we knew we wanted to offer all different types of films: claymation, docs, features, a dance film for City Ballet. We thought, “Wouldn’t it be great to just say we did everything?” And we still feel that way.

Photos and Interview by Meshakai Wolf