Some of our foremost innovators share their tips – and catchphrases – for a changing digital world. 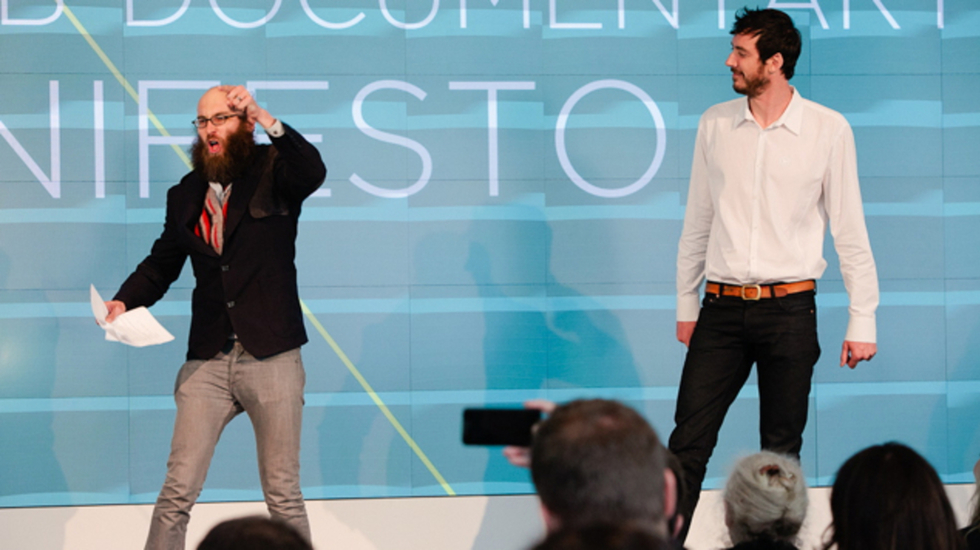 The Tribeca Film Institute held its second annual Interactive Day on Saturday, welcoming visionary artists and innovators from across a range of media platforms to New York’s IAC Building and a stage in front of its 120-foot Video Wall. These groundbreakers spent a whirlwind day outlining their view of the state of transmedia, new media, interactivity, storytelling or some combination of those elements. A few even dared to guess at what is coming next. Here is a small sampling of the big ideas and choice quotes shared during an exhilarating day on the cutting edge.

1. YOU CAN CONTRIBUTE TO AN ACCLAIMED INTERNATIONAL CO-PRODUCTION RIGHT NOW.

Keynote speaker Tiffany Shlain, founder of the Webby Awards and Moxie Institute, presented her Cloud Filmmaking Manifesto, built out her own experience as a filmmaker with a desire to give back. Her earliest project as a young director was an ambitious indie production with a cast of hundreds, shot in San Francisco with the best—often meaning heaviest—equipment available.

The only goal she targeted was the creation of a single feature film. In her own words, it was a mess, yet she now spearheads international co-productions, still featuring casts of hundreds but adding in some sixty-five languages and generating books and non-profit advertising pieces alongside the typical final film. She loves every minute of it. The difference is the cloud. Via moxieinstitute.org or letitripple.org, she solicits and eagerly welcomes videos and animations from Internet users across the globe. You can participate right now, using nothing more advanced than the camera on your smart phone or computer.

The topics in Shlain’s cloud-sourced films have ranged from the benefits of interdependency to the parallel between human brain development—biology’s most advanced system—and the evolution of the Internet—technology’s most advanced system—topics that lend themselves to a range of social causes. Shlain has adapted her productions into 500 films supporting non-profits around the world. The results have only driven her to more ambitious and inclusive projects to come. “Everyone wants to participate in something larger than themselves,” she says.

“Storytelling is the campfire. It’s how we find one another in this world.” –Deanna Zandt, Lux Digital

In 2010, Steve Jobs famously equated the personal computer to trucks, in that farmers who moved to cities traded in the large vehicles required for field work for a smaller, lighter, more functional car. In this scenario, tablets are the cars, and as Jobs predicted and a passing look at the Interactive Day crowd corroborates, they are increasingly ubiquitous in city settings. To Loc Dao, head of digital content and strategy at the National Film Board of Canada, that transformation is instead a progression farther into an unexplored frontier of interactivity and artist-audience integration.

Case in point, the interactive section of NFB’s website, home of a breathtaking range of projects sampled on Interactive Day that showcase how online, story-based projects bring together animators, digital artists and everyday Internet users: Bear 71, Barcode.tv, BLA BLA and 2013 TFF Storyscapes selection A Journal of Insomnia. The next step, says Dao, is discovering what these types of projects become on tablets. His company is currently prepping for the tablet release of The Last Hunt, a “cinematic reading experience,” he says, that mixes together text, photography, video, animation, illustration and musical scores with the touch controls and intuitive on-screen motion familiar to tablet users.

Next up is a collaboration with artist Stan Douglas for a non-linear, dialogue-based story set in and spanning Vancouver. The project will encapsulate not only the city’s contemporary stories but personal narratives from fifty years ago. Most surprising is its kinesthetic mode, which allows the tablet user to literally walk to navigate through the streets of long-dismantled Vancouver neighborhoods. And you thought walking while texting was hazardous.

“I really believe in failing quickly and learning from that failure.” –Lance Weiler, filmmaker and innovator

3. THE AGE OF THE INTERFACE.

Two presenters who used Interactive Day to peer into the future were filmmaker and techie philosopher Jason Silva and IDFA DocLab curator Caspar Sonnen. With the infectious energy and erudition familiar to those who have viewed his videos, Silva established the rule he tries to follow as an artist: to bottle inspiration—or, to not just communicate big ideas but provide the audience an environment in which they can absorb and reconstitute those ideas for their own purposes.

The task is built out of his understanding of the pace of progress. As we develop bio-, nano- and even more cutting-edge technologies, we exponentially increase the power of computing and minimize our proximity to it.

Ultimately, technology and human evolution will merge—“the singularity,” for you Vernor Vinge or Ray Kurzweil fans—and the interface will go from the palm of our hands to our hands and bodies themselves. Science fiction has trained most people to deem this as a fairly bleak prognosis, but Silva thinks that with the right preparation, it will be an inspiring time. In two of his favorite phrases, he says that we can right now analyze and then choose “the best possibility and pull the present to meet it.” In other words, “We may be flawed stumbling primates, but when we work together, we are primates that can fly.”

A short time later, Caspar Sonnen borrowed a question posed at the most recent SXSW panels, Are smart phones the new smoking? Where cigarettes were once a convenient out from an awkward conversation or a time-consuming and addictive habit that at the time was an easy way to look cool, smart phones have increasingly consumed that role in modern interactions, if not expanded it to make handheld screens our very first stop for distraction. Be honest, smart phone and tablet user, how many times have you checked your email or Facebook page since you started reading this post?

The marketplace bears him out. At over $300 billion, the market share of new media outlets like Facebook and Netflix has recently surpassed the share held by the old media bulwarks of television, radio and print journalism. In aiming to compete, old media is reinventing itself to the point that, in Sonnen’s words, “it’s easier to define what an interactive documentary is than what a newspaper is today.” To Sonnen, the future of media is online and integrated, though not without some conditions. Authors will increasingly be their own publishers, but not everyone will be an author: the Internet will require auteurs and directors to come up with creative ideas and guide and shape those projects through to their conclusion. No unrestricted creative space is the web. Nor will new media projects ever be completely interactive environments.

To Sonnen, interactivity is like salt, “too much and you ruin the dish.” Most crucial to Sonnen is his hope that Internet-based artists will learn to embrace what he calls the “slow web,” the chance to create broad, collaborative and well thought-out projects as opposed to quick takes made faster and cheaper. As the laws of economics make that last point something of a long shot, Interactive Day was as good venue as he can get to spread word now.

“Progression is not linear. The new doesn’t replace the old. They exist in parallel.” –Caspar Sonnen, curator, IDFA DocLab

AIR Mediaworks brought to the Interactive Day stage all ten of its Localore projects , collaborations with public radio stations across the country that pinpoint the shift in media toward interactive documentary, crowd-sourcing, transmedia and more. Benefit one from sitting in on the two Localore sessions: learning that this business exists. More telling was that these projects—and several presentations throughout Interactive Day—show that public radio has emerged as a hotspot for the integration of storytelling, technology and interactivity.

Audience members of Localore projects can take a unique city tour via Austin Music Map’s online guide to Austin’s diverse music scene and Planet Takeout’s similar landmarking of the omnipresent Chinese takeout. Visitors to either site can also contribute their favorites to the maps, including New York for Planet Takeout. Or you can take a seat at an editorial table in Chicago, choose what stories Curious City covers and allow everyday Internet users to join reporters on their interviews. Reconsider how children are taught through Ed Zed Omega’s interactive dialogue on contemporary education. Walk through radically altered landscapes in boomtown Western North Dakota and recession-rattled Dayton, Ohio, via Black Gold Boom and Reinvention. And many more.

These endeavors are never far from the familiar world of public radio; the Kitchen Sisters, the creative forces behind the San Francisco-based “Making of…” series that brought Homobiles to a New York audience, sounded like any NPR pledge drive pitch in saying that their “microphone is a stethoscope listening to the complicated parts of the nation.” Their sincerity is appealing, and the impressive breadth of the topics in Localore was easily matched by the diversity and inclusiveness of its artists’ approaches. Now, how long until Homobiles becomes the official car service for KQED ?

5. THE TWAIN SHALL MEET.

TFI Director of Digital Initiatives and event organizer Ingrid Kopp offered the most fitting summation of the day’s events as she ad-libbed between presentations, though she immediately copped to its slightly bulky phrasing: “The twain shall meet.”

Throughout Interactive Day, in one presentation after the next, artists took the stage as noted how fundamentally influenced if not directly dependent they were on technologists. And vice versa. The most visible example was Jessica Oreck, director of 2013 TFF documentary Aatsinki: The Story of Arctic Cowboys, taking the stage with Murmur co-founder Mike Knowlton to discuss their joint effort to bring the themes and conservationism of the film to a wider discussion and audience via an online hub, The Aatsinki Season . Festival films ain’t just on theater screens anymore.

Interactive Day 2013’s operating principles proved to be intertwined. It showcased the multiplicity of outlets available to the modern storyteller, but also, just as significant, the vital nature of collaboration that ensures storytellers and programmers take technology to its most useful and altruistic ends. “Technology is only good in the service of a really good story,” said Kopp, noting that both disciplines were well represented in the audience. The sentiment was echoed throughout the day, in Jennifer Brandel of Curious City’s praise of “the hive mind at work” or Lux Digital co-founder Deanna Zandt’s phrase, “Stories are the cornerstone of any kind of change that happens in the real world.”

A day of big ideas—and, as you can see, weighty catchphrases—boiled down to our most basic connection: we are all in this together.