"No Two Love Stories Are The Same": Marin Ireland on "28 Hotel Rooms"

Tony-nominated actress Marin Ireland discusses the complexities of love and working with Chris Messina in “28 Hotel Rooms.” The film opens in NYC on Friday, November 16. 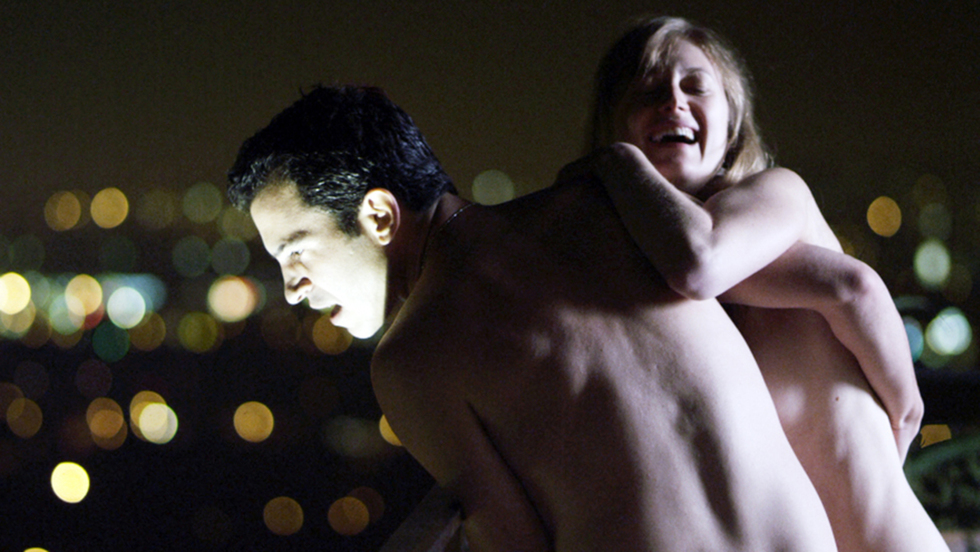 The recently released 28 Hotel Rooms injects originality and vitality into the tried and true secret tryst genre. Written and directed by Matt Ross (an actor known primarily for his roles in American Psycho, Last Days of Disco, and Big Love), this intimate portrait of an affair that spans many years—through the couple’s career disappointments, personal triumphs and marriages—provides a stunning look into the hidden lives of others. Chris Messina (The Giant Mechanical Man, Fairhaven) and Marin Ireland (Mildred Pierce, Homeland) play the unnamed pair that stumble into a physical affair that, to their shared surprise, turns into something emotionally tangible.

Naturalistic in style, the film benefits from its non-linear editing, with the camera focusing on hotel numbers to signify a progression of stolen nights. In that way, audiences must piece together the segments of this rare love story to arrive at a unified whole. Anchored by strong performances from its two leads, 28 Hotel Rooms is somewhat claustrophobic in tone and feel, ensuring that the audience becomes almost as wrapped up in the affair as the participants.

We recently spoke to Marin Ireland about playing unlikable characters, the unique intimacy of improv, and the nature of love itself.

Tribeca: 28 Hotel Rooms premiered at this year’s Sundance Film Festival. As you are primarily a stage actress, what was it like to experience one of cinema’s biggest events?

Marin Ireland: Yes! It was actually the first time at Sundance for either me or Chris. He’d had films in the festival before, but had never gone. It was wild and intense for us both. I was naked for so much of the movie, which was nerve-wracking for me. I know the term “labor of love” is so cliché, but that’s exactly what this project was.

Tribeca: 28 Hotel Rooms is one of the rawest looks at a modern affair that I’ve ever seen. What was your reaction after you read the script?

Marin Ireland: Well, I guess it all started 10 years ago when Chris and I were in a play together, which was actually one of my first jobs here in the city. It was mostly me, Chris, and Frances McDormand.

Tribeca: Wow. Not a bad way to get your feet wet in the city?

Marin Ireland: [laughs] Dreamy, right? So Chris is actually the one who brought me into this project. He and Matt Ross, the writer/director, had been developing the concept for a couple of years, and they just called me out of the blue while I was in a play. Matt was coming to see the play and he told me that he also wanted to speak to me about a potential film.

He explained that the plan was to leave room for improvisation. He also assured me that whoever was brought in to play the female role would be able to spend a few weeks with them developing her character. To that point, they had been focusing on Chris’s character the majority of the time; the female character was still a sketch when I first came to the project.

Tribeca: Your character is never vilified. She is a smart, complex woman, fully in charge of her sexuality—a rarity in films, even today. How much of that complexity was due to your input?

Marin Ireland: I really liked the idea of this woman being not necessarily the traditional indie girl. She is a professional who is not as emotionally accessible as the typical heroine. Matt and Chris really wanted to do something different in that they wanted the guy to be more open with his feelings than the female. They wanted to the girl to be the one who remains somewhat aloof and has those little secrets.

I think it definitely helped that all three of us had theater backgrounds. I’m never concerned with making a character likable when I choose a role. It’s really exciting to me when that pressure is off, like it was during 28 Hotel Rooms. In other projects I’ve done, the likability factor has been a concern. For me, I relate more to a character who is flawed, because that’s real.

Tribeca: I imagine that a film like this would have had an arduous rehearsal period unlike your typical feature. What was that process like?

Marin Ireland: I came out to LA and we had a two-week rehearsal period, just the three of us. We went through it scene by scene, talked about variations, and then improvised on our feet. Matt actually videotaped most of these sessions, as we would just sort of riff off each other. He then took all of that work and prepared another draft of the script. When we were on set, we would shoot what was written, but he still would allow us to improvise. As it ended up, the final cut of the film retains much of the improv dialogue.

A lot of my favorite parts in the film are little vignettes we shot on the side. That kind of spontaneity was always Matt and Chris’s hope for the film—they wanted it to feel natural and fluid. The result was that we felt we were making the film on the set as opposed to in the editing room. That is not to say that the editing process was not intense as well. Because the film is non-linear, the editor had the power to change the whole trajectory of the narrative by just the shuffling a few scenes.

Tribeca: I thought it was interesting that the film didn’t include a scene showing how they met. Was it ever shot?

Marin Ireland: That was filmed, but Matt decided to keep their first meeting a mystery, along with the exact timeline of the story. We thought leaving both open would add to the film.

In other versions of the script, the sections weren’t split up by room numbers, but by dates. As he was editing, Matt found a lot more value in keeping the timeline vague so that audiences could arrange the order themselves.

Tribeca: I am a big fan of Matt Ross, both as an actor and now as a writer/director. Can you describe your collaborative process with him? Was it easier/better to work with him as a director since he is primarily an actor?

Marin Ireland: It was almost an ideal process. In terms of his demeanor on set, he was so supportive. The best thing about working with an actor/director is the efficiency with which they can give you input. Matt knew when to stop talking after giving me an idea to let me work things out myself. He knew how to get me to have that moment of realization and how to help me jump back into the scene.

Chris and I work very differently, and Matt as an actor could understand how to work with each of us to help form this unique partnership that was vital to the film. It sometimes felt like he was acting with each of us from the other side of the camera, which was a really unique, cool experience. It was so liberating.

Tribeca: Chris Messina is often described as an “actor’s actor.” Given the frank sexual and emotional intimacy of the film, the chemistry between you two was vital. What was it like working with him?

Marin Ireland: It was really special to get to work with him again 10 years after our first project together. It’s hard for me to imagine what this film would have been if the two actors had not known each other beforehand. He’s almost family, so I just felt incredibly safe and comfortable with him. Also, he’s so free and easy with improvisation that I was able to vibe off him and dive right in.

Tribeca: How long was the shoot?

Marin Ireland: I think 18 days total, all in LA. We had a couple of days of re-shoots in NY. It was broken up, though. I was actually shooting Mildred Pierce in New York, so we shot whenever I would have a few days off. There were times when I would get off the plane after a few days of shooting 28 Hotel Rooms in LA and go straight to the Mildred Pierce set in Brooklyn at 7:00 am. I think I went back and forth 4 or 5 times.

Tribeca: Was that a challenge to jump in and out of character like that?

Marin Ireland: I like being busy like that, because you don’t have time to over think or to question yourself. We were so in tune with the characters of 28 Hotel Rooms that Chris and I could easily sink back in, like, “Oh, we’re having a spat,” or, “Oh, he’s painting my nails” without much fuss. We were so comfortable and had a lot of freedom.

Tribeca: I can’t imagine that the crew for 28 Hotel Rooms was very large.

Marin Ireland: No, no. It was pretty tight. For a lot of the scenes, it would be me, Chris, Matt and Doug [Emmett, the cinematographer], especially the more nude-y stuff. It was kind of a relief because you were in these tight spaces and there was just nowhere for anyone to be. That was a challenge for Matt too. He needed to play with the space he had and to find a balance between the room scenes and the scenes outside of that space that took place in other areas of the hotel. The sense of claustrophobia is vital to the story, so he had to be sure to keep it intact.

Tribeca: How many hotels did you film in total?

Marin Ireland: I think I heard something like 20, but I honestly don’t remember. It was such a whirlwind. The farthest we got out of LA was Pasadena, I think. After we were done filming for the night, I would actually stay in the hotel rooms that served as our set for the day, since we paid for the overnight reservations anyways. It was kind of great [laughs].

Tribeca: The concept of love in 28 Hotel Rooms is tricky. It can be obsessive, consuming, destructive, intoxicating and more. What do you think the film says about the nature of love itself?

Marin Ireland: Matt asked us whether it is possible to love more than one person. I think the film explores a more open idea of love, and asks what would happen if you’re not with the person that you love all the time. In other words, can love survive against all obstacles?

If I’ve learned anything from this film, it is that no two love stories are the same. I feel that two people together in love with each other form their own universe together, and it never looks like anyone else’s. Ultimately , the love that the characters have for each other is just as valid as other types of love.

Tribeca: So what’s up next for you?

Marin Ireland: I’m working on a play in New Haven, and I shot a pilot for AMC that we are hoping gets picked up. Fingers crossed!

28 Hotel Rooms opens in NYC at the Village East Cinemas this Friday, November 16. Not in NYC? You can watch the film on VOD and other digital platforms.