Home » Tribeca News » "BURN: One Year on the Frontlines of the Battle to Save Detroit" Documents A City On Fire
View All News

"BURN: One Year on the Frontlines of the Battle to Save Detroit" Documents A City On Fire

Directed by Tom Putnam and Brenna Sanchez, “BURN” is an action-packed documentary that takes you into the smoldering heart of the Detroit Fire Department. The TFF 2012 Heineken Audience Award winner opens this Friday in NYC. 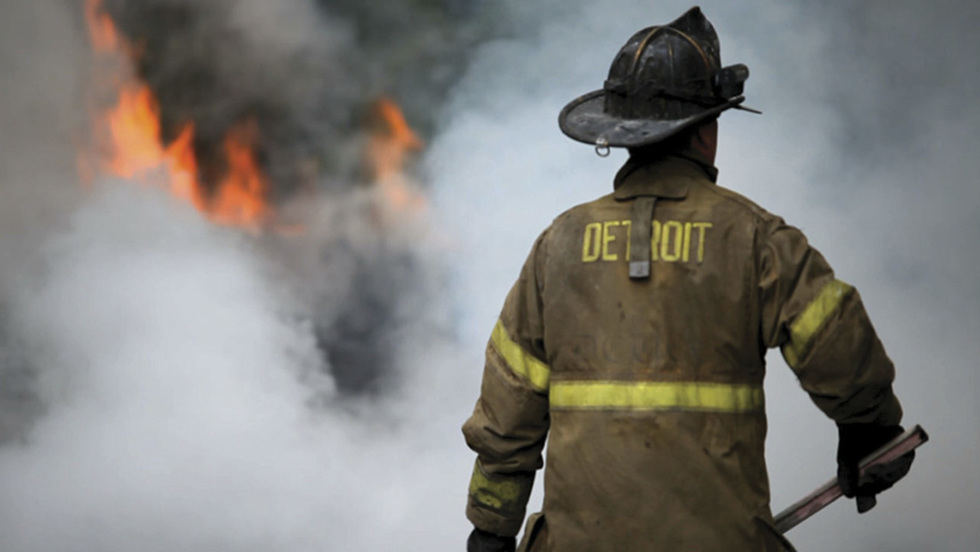 Update November 7: Since receiving the Heineken Audience Award at the 2012 Tribeca Film Festival, BURN has embarked on a city-by-city tour. The film is also a finalist for the Gotham Awards’ Audience Award.

BURN opens in NYC on November 9 at the Quad Cinema. For NYC screening info, a list of upcoming cities, and to view the amazing new theatrical trailer, please visit the website.

Tribeca: Tell us a little about BURN. How do you describe the movie in your own words?

Tom Putnam: BURN is a war movie. But this war isn’t in Afghanistan or Iraq. It’s right here in America—in Detroit. The end result is an action-packed documentary about the city told through the eyes of its firefighters, who are some of the busiest in the world, and with whom we’ve spent the last year embedded. But it’s also a look at the challenges that first responders face in every city, particularly in this political and economic climate.

TRIBECA: What inspired you both to tell this story? Are either of you from Detroit?

Brenna Sanchez: I grew up in Detroit, and was home for Christmas in 2008 when Tom sent me a story about a firefighter named Walt Harris who died battling a fire in an abandoned building. So we asked the seemingly simple question that anyone outside the city would: Why would someone risk their life to save an abandoned building? I went down to the local firehouse and started talking to the guys, and it just took a few minutes to realize that there was a big story here, one that was not being covered by any mainstream media.

TRIBECA: What do you want audiences to take away from BURN?

Tom Putnam: We hope it will give audiences a realistic, boots-on-the-ground look at what firefighting is, which is something we’ve never seen before. We live in an era of relentless cutbacks to public employees, their pensions, and the infrastructures they support. BURN shows you what can happen when those cuts go too far.

Brenna Sanchez: Detroit isn’t unique in its problems. It’s simply a few years ahead of the rest of America. If we don’t educate people to what firefighters do, and what they need in order to do their jobs, before long every city will be in the same precarious position that Detroit is in.

TOM PUTNAM: But while the film highlights the many issues these guys face, it’s also a hopeful film. These are people who believe in what they do, who believe that the city can come back, and they’re willing to put their lives on the line every single day to try and make that happen.

Brenna Sanchez: There is so much media on Detroit right now, and so much good happening: Business investment, activism, urban farming. Things are changing. But our firefighters are risking their lives for the city. Our heads get filled with somewhat two-dimensional, heroic images of firefighters. I hope people will come away with a more complex understanding of who they are and what they’re about.

TRIBECA: You feel an incredible sense of urgency when you are watching BURN. Can you give us a sense of your timeline? How long have you been working on this project?

BRENNA SANCHEZ: We did an R&D shoot for the film in 2009. The goals were to meet the firefighters and document the massive number of fires they experience. No one believed there would really be enough fires to tell a compelling story—even Tom didn’t believe it. But I knew. As anyone in Detroit will tell you, there are plenty of fires. We went to 21 fires in our first two shifts with the firefighters.

TOM PUTNAM: We then spent a year trying to raise money through all the usual documentary funders, and got turned down by all of them. So we began pursuing charitable donations, which is unheard of for a film this size and scope.

BRENNA SANCHEZ: Once General Motors stepped in with a donation to get us started, we began filming the feature in December 2010. And we just had our last shoot in January 2012. Since we had no way of knowing who would rise to the surface and whose personal stories would speak to the larger issues with the department and the city, we began by filming a wide variety of firefighters and a number of other Detroit residents as well.

TOM PUTNAM: And as the most poignant storylines rose to the surface, we slowly narrowed our focus. In the end, we shot about a thousand hours of footage.

TRIBECA: The footage of the fires in BURN is astonishing. You get the audience practically into the flames. How close was your crew to the fires? Did you encounter any technical issues while filming?

TOM PUTNAM: One of our biggest challenges with the film was the technical. No one has made a firefighting documentary before, let alone sent cameras into burning buildings. So when we went in 2009 we were using the (then) brand-new technology of DSLR cameras and HD helmet cameras.

BRENNA SANCHEZ: By attaching these to the firefighters, we’re able to see the world as they do. We go right through the doors and into the danger with them.

TOM PUTNAM: Plus, after a year of filming, some of the guys have turned out to be pretty damn good cameramen as well. After the first few shoots, the guys would get back from a fire and ask us to show them the ‘dailies’ so they could see how things were looking and adjust their camerawork, which is an amazing collaborative relationship to have with your subjects.

BRENNA SANCHEZ: And we were able to put together three amazing DPs: Mark Eaton, Nicola Marsh and Matt Pappas.

TRIBECA: Firefighters, in general, are a notoriously tight-knit group, but so many of them were incredibly open to the cameras. What was it like building those relationships with the firefighters?

BRENNA SANCHEZ: There was a great deal of reluctance from both the city and the department, both of whom have been targets for bad press. We were sent to Engine 50 to film, and when we got there the firefighters hadn’t even been told we were coming. So I began by sitting down with each one of them for an hour-plus interview. Of course, these were often done in pieces, grabbing whatever time we had between fire calls!

TOM PUTNAM: Once they heard the types of questions we were asking, and saw what we were pointing our cameras at, they began to open up. No one has ever asked them what they do or who they are. These are people who want the world to know what they’re dealing with, and once they realized what kind of movie this was going to be, they became hugely supportive. As we keep telling them, this is their movie; we’re just making it.

TRIBECA: I’m sure you met a lot of interesting characters: how did you choose to focus especially on Dave Parnell and Brendan “Doogie” Milewski? Is there any point during the filming  where things got too personal or difficult that either one wanted to stop?

BRENNA SANCHEZ: Dave Parnell was one of the firefighters we met on our first day filming in 2009, and we just fell in love with him. He’s one of the few guys who lives in the same neighborhood in which he fights his fires, and he’s a father figure to the guys in the firehouse and the people in his neighborhood. So he seemed like a natural. And as one of the older firefighters, he’s seen so much that it gives him a unique perspective on the city and their jobs.

TOM PUTNAM: And Doogie was someone who had contacted us after seeing the original trailer, and he had so many interesting things to say that we knew he was someone we wanted to film. But just before we got started shooting he was badly injured in a building collapse. So we ended up filming him, but in a way we’d never imagined, as he starts the long road of therapy and discovery of what his life will be like after the accident.

BRENNA SANCHEZ: Through Doogie and Parnell we discovered the central theme of our film—change. Like the city they love, these guys and the DFD are being faced with a huge, potentially crippling change. And all of them are struggling to find their “new normal” and evolve to face these challenges.

TRIBECA: Was it difficult to get the Detroit Fire Department and the newly appointed Fire commissioner, Donald Austin, involved in BURN? What was that process like?

BRENNA SANCHEZ: The department and the city were both very skeptical about the film. I have a tremendous heart for the city I was raised in. I’ve always been so proud to say I’m from Detroit. I thought I was going to go back, and be welcomed with open arms. Not so. Because I’d moved away from the city, and because I had a camera, I was an outsider. The negotiations to shoot the trailer in 2009 took months, and the re-negotiations to shoot the feature itself took about a year. We had a meeting where all the decision makers from the city sat around a table with us and asked question after question. But in the end I guess they must have liked our answers because they gave us the okay.

TOM PUTNAM: The department is always under a ton of pressure, and while we were working on this they went through five commissioners. Don Austin came in half way through our shoot and it was clear from the outset that he was very different than this predecessors. For starters, he was coming in from the Los Angeles Fire Department. He hadn’t come up through the ranks of the DFD, so he thinks and sees things from a very different perspective.

BRENNA SANCHEZ: And I have to commend him on the level of candor and access he gave us. His job isn’t easy, but as busy as he is, he worked hard to make himself available to us so we could get a look at what his job is really like.

TRIBECA: How and when did Denis Leary and his company, Apostle, come onto the project?

BRENNA SANCHEZ: We pestered him. Seriously, we just kept e-mailing progress reports, new footage we’d shot, conversations we were having. Finally, after a year, we got a call back.

TRIBECA: What's your advice for aspiring filmmakers? Is there one particular thing you learned?

TOM PUTNAM: Don’t give up. Every single person we spoke to told us we could never get this made: There wouldn’t be enough fires, the technology wasn’t ready, no one wants to see firefighter films, the list goes on. But we stuck to our guns and just willed the film into existence. If you’re persistent and strategic, you can get your film made.

BRENNA SANCHEZ: So many people will tell you “No.” Don’t argue with all the “No’s”—your time is way too valuable, and besides, you’ll just sound petulant. Start the work. Do the work. Come back to the “No’s” with the work and say, “See?”

BURN opens in NYC on November 9 at the Quad Cinema. For NYC screening info, a list of upcoming cities, and to view the amazing new theatrical trailer, please visit the website.

BURN will have one-night screenings across the country through December. Opens December 7 in Chicago, Washington DC, and the Detroit area. More info here.