AFROPUNK FEST: How a Documentary Became a Music Festival 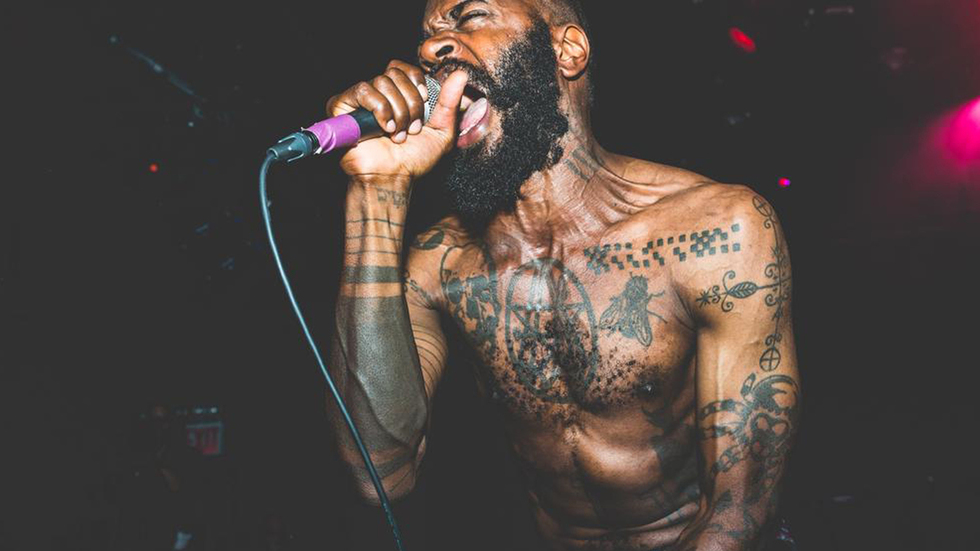 “It all started as a documentary,” explains Jocelyn Cooper,who co-owns along with founder Matthew Morgan, the music festival AFROPUNK. Shot in 2003, “AFROPUNK,” was Matthew Morgan’s way to show on camera the burgeoning black American punk scene. “Matthew went to the Brooklyn Academy of Music and suggested they start a festival after the screening of the film,” says Cooper of the 2004 music festival spun from the musical acts featured in the film.

There’s a scene in the documentary that sums up the void the
festival fills by mixing art, activism and music to bring together a diverse group of black creatives. In one-scene young black punk youths details how they, “are usually the only black person at
the shows,” as of them put it in the film. Another says jokingly in the film of his first experience at a punk show, “wow, there are 300 white kids and two black kids and you are like damn.” The feeling of isolation of black punk youth across the country led Matthew Morgan, who produced the 66-minute film to create AFROPUNK.

Eleven years later, the festival has grown to include APROPUNK
FEST Atlanta and Paris, and at this year’s headliners at the flagship Brooklyn Festival will include Grace Jones, Lenny Kravitz, and Lauryn Hill. These groundbreaking icons will share the stage with emerging talents like SZA, Lion Babe, and Cakes Da Killa. “The initial festival was very small with only 250 people, but every year it has
doubled in size, over the last ten years” says Cooper. “The
ability to have someone like Grace Jones perform is growth. We are growing and we are pushing boundaries because that’s what we are suppose to do.”

The mix of talent that will perform at AFROPUNK 2015 also shows
that the festival identity has evolved beyond its punk roots. “AFROPUNK is for anyone who wants to come to the party with the right mindset and who wants to be free,” explains Cooper of the move away from its strictly punk identity. But some festivalgoers like Diamond Sharp says AFROPUNK have grown to represent an “Afro-futurist aesthetic.”

“I think the overall theme is inherently Afro-futurism—this idea that Black folks have always had to imagine a more utopian future,” explains Sharp who has attended the festival the last two years. She says many of the musicians who play the fest like Janelle Monae and Shabazz Palaces articulate Afro-Futurist influences in their sound and aesthetic choices. For Sharp, Afro-futurism makes the festival feel like “an artistically inclined Black family reunion with a perfect soundtrack.” For many that attend the space that AFROPUNK has created over the last decade also is one of the very few public spaces where the diversity of the black community is celebrated. The festival is an authentic black creative safe space where difference is encouraged.

“I feel like AFROPUNK is one of those few times of the year that you can be unapologetically black and brown, given the current state of what it’s like to be just that in this country,” says DJ Oscar Nunez, who will play the festival this year with his partner Adam Rhodes of the Brooklyn based DJ collective PAPI JUICE. “So to be able to attend and play AFROPUNK is definitely special. It’s almost like there is a mutual understanding amongst everyone there that we are here for a celebration of what it is to be black, brown, and weird in the best way possible.” Rhodes adds, the festival is also about community building. “Being a part of a QPOC contingent at the festival, it's great to meet with other performers and people who are out here doing the thing. It's community building,” says Rhodes who has attended AFROPUNK from the beginning.

Beyond the music, AFROPUNK has also historically been a place where activist organize. To kick off AFROPUNK 2015, twenty activist organizations will be leading a Black Lives Matter march aimed to highlight Trans rights. According to the Black Lives Matter Movement Trans black men and women life expectancy hovers at 35 years of age. “We are taking an active role in making sure that there’s space for the movement to be prominently on display and celebrated,” explains Nathan Leigh, an afropunk.com music editor who has been working with activist organizations over the last year to increase their visibility at the festival. “In addition to the march there’s an area within the festival, that we call, ‘Activism Row’ that we have established over the last couple of years where social justice organizations associated with the Black Lives Matter Movement will have literature,” he adds.

The stance AFROPUNK is taking to include Black Lives Matter, is one of the things that make the festival more than just about music. “The festival within the last few years, has at least to me, served as a Black healing space in the face of a society that is intent on our destruction,” says Sharp. It is a sentiment shared by Leigh who says he started working at AFROPUNK five years ago because “the thing that continues to make me excited to be apart of it on a daily basis is because people say that the festival is the only place they fit in and that they have a home and a voice, and that they are listened to, and to be able to help maintain and create that space is really an honor.”

In recent years AFROPUNK has also invited black artists like Wangechi Mutu, and Stanford Biggers, and Derrick Adams to be apart of the festival. In 2012 AFROPUNK produced a series of films called, “Triptych,” where Mutu and Biggers talked about their practices. According to Cooper, the documentary series, was AFROPUNK’s way of trying to expose the community they share to important black artist in the same ways they use the platform to highlight musical acts that may have no other channel for expression. This year, flanking both sides of the festival’s “Red Stage,” will be a 200 feet high canvas for live creation of original paintings by artists.

“The interesting thing is people just think of AFROPUNK as just a festival, but AFROPUNK really is a community of people that started ten years ago online, and now we are reaching about 9 million people a month across our social media channels, explains Cooper. “For us we listen to what the community is talking about and wants and we curate content and events for them. The community is the blood of what we do. The AFROPUNK festival in Brooklyn and in Atlanta and Paris is really just a celebration of the community.