Take a peek at the movie slate for April: what's big, what's risky, what you should be looking forward to. 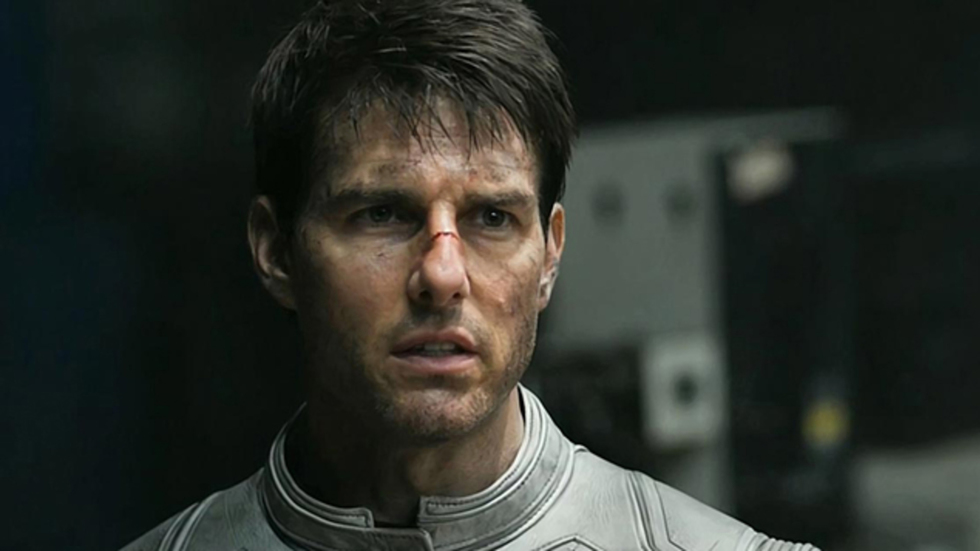 The Big Dog in the Yard
With all due respect to traditional multiplex big-dog Michael Bay, whose Pain and Gain action-comedy with The Rock and Mark Wahlberg will surely take a hefty slice of the pie, April is all about Oblivion, the post-apocalyptic return-to-Earth sci-fi adventure that doesn't star Will Smith. No, this one will have to make do with Tom Cruise as the lead, as well as Morgan Freeman, Andrea Riseborough, Nikolaj Coster-Waldau (Game of Thrones), and Olga Kurylenko (To the Wonder). The trailers promise something stylish and possibly even clever (it’s those glimpses of Melissa Leo as a kind of Stepford Mission Control agent that do it). All that, plus a gorgeous little score provided by M83.

Riskiest Gamble
Danny Boyle tumbles down the rabbit hole of cerebral thrillers with Trance. The movie promises something twisty, sexy, and unexpected, but it moves Boyle away from the territory traveled by his recent big successes 127 Hours and Slumdog Millionaire. Still, a cast including James McAvoy, Rosario Dawson, and Vincent Cassel should help deliver a film well worth seeing.

Performance to Watch Out For
Matthew McConaughey was a huge story in 2012, with acclaimed performances in Magic Mike, Bernie, Killer Joe, and The Paperboy. He's set for a pretty big 2013 as well, starting with Mud, the follow-up to director Jeff Nichols's Take Shelter. McConaughey gets the featured role of a fugitive who gets caught up with two boys, as well as Reese Witherspoon.

The month's other performance to be excited about is by Penn Badgley, who is taking on the iconic role of Jeff Buckley in Greetings From Tim Buckley. We've gotten a brief glimpse of Badgley's work, and there's a lot to be excited about. Look for the film on April 16th.

Toughest Opening-Weekend Decision The very first weekend April offers audience's a Sophie's Choice of old and new. ...Well, new based on old. The remake of Evil Dead, whose trailer makes it look fairly terrifying, opens up against 3D screenings of Jurassic Park. Do you opt for the old made new again and sign up for a bone-chilling evening in the dark, or do you re-experience childhood wonderment as if for the first time? Yes, fine, you could see one on Friday and one on Saturday, but let's go with the thought experiment here.

Best Movie to See With Friends
One of two ways you could go with this. You could gather your people and huddle up together while Rob Zombie tries to harm your psyche with The Lords of Salem. Or you could take in Upstream Color, Shane Carruth's follow-up to the mind-bending (and time-bending) Primer. The former is allows you to experience horror in the best, most visceral way possible. The latter should be combined with ample post-show time to puzzle over the film's many mysteries and big ideas.

Best Movie to See Alone
Terrence Malick's To the Wonder is due to open in theaters and on Video On Demand. Either way, see it alone, quietly, contemplatively. Allow some time to sit with your thoughts. Ponder the universe. Parents and children. Friends and lovers. Wheat fields and other, different wheat fields.