This intimate documentary from TFF 2013 about the groundbreaking experimental poet/filmmaker James Broughton is now out on VOD/DVD, thanks to Kino Lorber’s Alive Mind Presents. 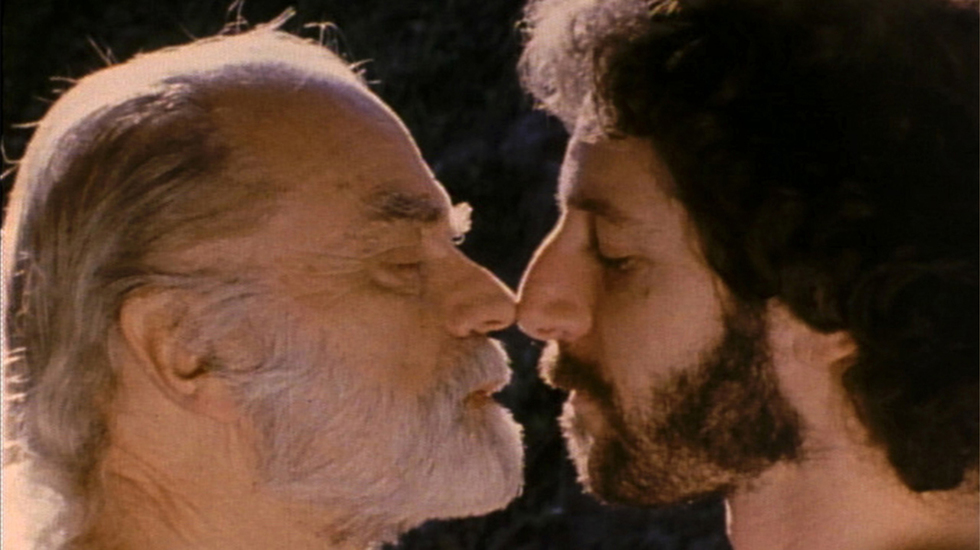 Directors Stephen Silha and Eric Slade also incorporate home movies, photographs, performances footages, quotes and clips to build a fascinating portrait of the experimental icon. We chatted with Silha and Slade about why the man and his work are still as relevant as they are today as they were in the 60s.

Tribeca: What inspired you to make Big Joy: The Adventures of James Broughton?

Stephen Silha: I met James first through his films at the Museum of Modern Art and then a decade later when, at a Radical Faerie gathering, we were assigned to the same cabin. So I knew him for the last ten years of his life. He was a mentor of mine. I feel like his work is so relevant to this century that I just had to make a film.

Tribeca: In addition to his being a very important artistic and gay icon, he was also one of the fathers of west coast independent cinema. I just was wondering if you could talk briefly about his role in the San Francisco Artistic Renaissance.

SS: Sure, that’s sort of where the Beats got their start in San Francisco Renaissance, and it is an era that most people have probably never heard of. One of the exciting things about making this film was being able to dive into that era. James was a poet in the thirties and forties, and then at some point during that time, he decided he wanted to put that poetry on film, which was pretty unusual at the time.

So he and Sydney Peterson got together in 1946 and made what was one of the first experimental films in the Bay Area called The Potted Psalm. We were so lucky and happy to have George Kuchar  in our film because he comes from the east coast experimental films, and he  met James when they were teaching at the San Francisco Art Institute in the sixties, seventies and eighties.

Tribeca: One of Broughton’s most important works was The Pleasure Garden, which won the Special Prize at Cannes.  After Broughton turned down an offer to direct a film in Hollywood in spite of winning that prize for The Pleasure Garden, Pauline Kael told him he just made the biggest mistake of his life. Do you agree or disagree and why?

Eric Slade: In this case, I think she was wrong. James’ films become more famous at many points in his life, and this was not the last one that could have made him as famous as Allen Ginsberg. He kept choosing the artistic path and what he felt was real for him. He didn’t want to go into the “film business;” he wanted to make films. So I think he absolutely made the right choice. His approach to filmmaking was “Follow Your Own Weird.” Don’t make the film anyone else can make; make the film only you can make.

Tribeca: I thought one of the most effective parts of the documentary was the interview with Pauline Kael completed shortly before her death. How did you gain access both to these audio materials and to Broughton’s own private recordings?

ES: Our friend Robin White, who’s a fellow Radical Faerie and fellow media maker, had done a radio show about James and, as part of that, had done an interview with Pauline Kael. So he gave us access to all of his recordings.

ES: Yeah we did a lot of investigation to find every recording of James talking, but there’s not a lot, and, of course, by the time we got around to making the film, he’d passed away. Another one of the great answers we came up with was to use his journals for material. He wrote every day of his life, and those journals are in the archive, so we were able to go through those. And then we had an amazing animator who was able to bring them to life on screen.

It's very beautiful, and very loving, and very naked.

Tribeca: I was so moved by the unconventional love story involving James and his partner, Joel Singer. Can you talk about meeting Joel for the first time?  How was it that he became one of the film’s executive producers?

SS: Well, James and Joel were very close friends of mine during the time when they lived in Port Townsend, Washington, after they couldn’t afford to live in San Francisco. . After James’ stroke I would take care of him while Joel was on vacation. And Joel now lives in Bali with another octogenarian lover. He’s just been so wonderfully supportive during this project.

ES: Joel was really excited about this film getting made, so he’s been behind this all the way.

Tribeca: And I noticed that while James’s son, Orion, and his ex-wife agreed to be interviewed, his daughters did not. Did they give any sort of explanation?

ES: Serena, one of his daughters, had a great quote. She said: “James Broughton brought a lot of joy into many people’s lives; I just wasn’t one of them.”  James and Susanna both admitted that they were terrible parents – Susanna told us while we were interviewing her that they should have never had children.

They were both artists, and they were more excited about making their art than being parents. I think they produced some great kids, but the parenting suffered.

SS: And Gina, the daughter that he had with Pauline Kael in 1948, can’t wait to see the film because she knows so little about her father. She didn’t even meet him until she was 11. She wouldn’t even give her mother’s biographer, Brian Kellow, an interview about her mother. She’s just a very reclusive person.

ES:  George Lucas. There’s a great interview with him that says “When I got out of film school, what I wanted to really do was to make films like James Broughton.” We really wanted to have George on camera saying that, but scheduling was tough.

Tribeca: I really loved the way you guys ended the documentary, with all the interviewees, who really loved James, reading “This Is It” out loud. Why did you choose that particular poem out of his entire body of work?

ES: It’s probably his most famous poem and it kind of felt like the perfect ending.

SS: It sort of sums up his whole idea of life, you know? It’s kind of a zen take on life. It’s deep and it’s simple, and I think that’s how James regarded life.

Tribeca: What are you two most looking forward to at Tribeca?

SS: I’m looking forward to seeing all of the people in New York who know James and also to connecting with the new younger generation that hasn’t heard of him. Also, I think Tribeca gives us a really good chance to connect with a really broad audience.

ES: I’m excited to bring this wacky, west coast, weird sensibility to the east coast. However, there can be a cultural clash sometimes between east coast and west coast. So I’m really looking forward to that. But like Broughton’s films, we are aware that this might totally flop. His films never did well in New York [laughs].

Tribeca: So what makes Big Joy: The Adventures of James Broughton a Tribeca must-see?

ES: All of our audiences have come out so far saying that the film has transformed the way that they want to live their own lives. So it’s not just a film, it’s an experience. If you live through it, you’ll come out different.

SS: And it’s just a hell of a lot fun. It’s unlike any other film that I’ve ever seen.