We talk to Brent Hodge about the Brony phenomenon, modern masculinity and his leading lady, Ashleigh Ball. 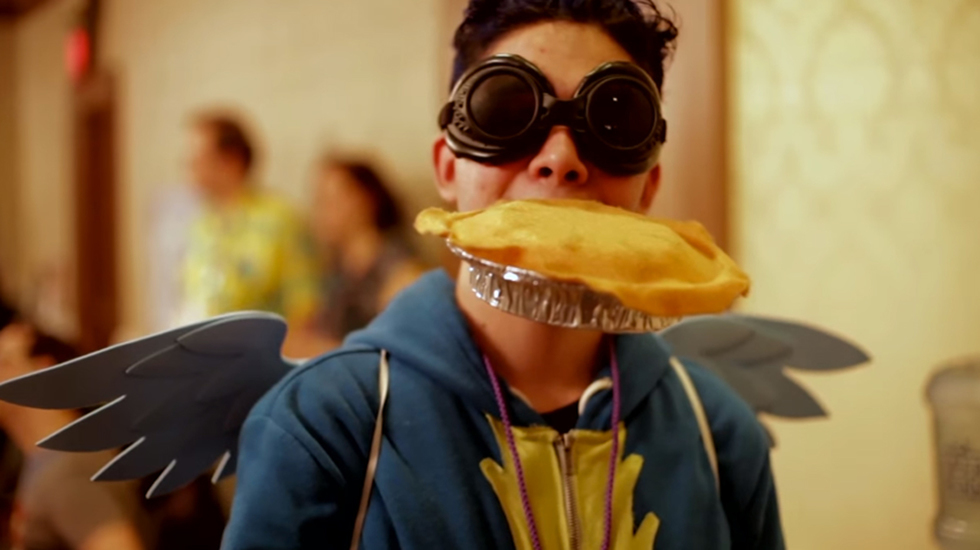 One might be hesitant to explore the strange and close-knit world of the Bronies, but not Brent Hodge. He had the perfect “in” to this community, given his friendship with Ashleigh Ball, one of the voice actresses on My Little Pony: Friendship is Magic. What started out as a film to explore Ashleigh Ball’s relationship with her Brony fans became so much more.

In addition to telling Ashleigh’s story, A Brony Tale director Brent Hodge gives audiences a peek into what it means to be a “Brony.” Before the Festival, we spoke to Hodge about his process, his purging preconceived notions, and his ultimate devotion to the story.

Tribeca: You knew Ashleigh Ball before her stint on My Little Pony: Friendship is Magic. What made you decide to make a documentary about her and the Brony phenomenon?

Brent Hodge: Ashleigh had been working as a voice actor for a few years before she started on My Little Pony: Friendship is Magic. She told me about this group of male fans of the show who identified themselves as “Bronies.” The minute she told me about them, I asked her to start forwarding their emails to me. Gradually, I began to get a glimpse into their world.

After a while, I got in touch with some of the leaders of the Bronies fandom, and they would tell me about other Bronies I should speak with. So I picked up my gear and started to travel around the country to interview these dudes. All I had to do was go, hit record, and let the story unfold in front of me.

Tribeca: Was Ashleigh at all nervous about having this part of her life documented? Did you have to get permission from the show for her to participate?

BH:  She didn’t really understand the phenomenon until she went to a Brony convention. It blew her mind.  She’s had fans for quite a while with her music, and she was used to keeping them at a distance, but she has fully embraced the Bronies now.

Tribeca: It’s fitting that her music is the soundtrack for the film. It just works perfectly. Can you talk about working with her and Hey Ocean on the music for the documentary?

BH: I started my career at the Canadian Broadcasting Corporation, and we used to showcase their music. I’ve been friends with Ashleigh and the group for years, so I felt like I was working with my best buddies on this documentary. We all have other careers in the film industry, and we did this movie just for fun.

Tribeca: One of Ashleigh’s band mates said about their Brony fanbase, “weird can be really good and really rad.” What is your general sentiment regarding the Bronies?

BH: The notion of grown men identifying themselves as  “Bronies” seemed so odd to me that I knew it would make an interesting subject for a documentary. For a time, I tried to define what being a man actually means. I concluded that part of being a man means being kind and loyal—both qualities that the Bronies embrace.

Perhaps the most interesting thing I learned was that Bronies are not so much about the show, but about the community. They are interested in friendship and in finding common ground within a group.

Tribeca: I remember during the SoCal meet-up, there was a shot of this timid high school kid who looked like he found a place there.

BH: [laughs] I should probably tell you about the So-Cal Brony meet-up. I knew I was going to be in LA on a different film shoot, so I arranged a Brony meet-up. I originally planned on doing a 5-person dinner party, but by the time all the RSVPS were in, 58 people agreed to come.

So we decided to go the beach. It was a really stressful shoot because all 58 people wanted to appear on camera and let their voices be heard. Being from a small town in Canada, I can’t imagine growing up in a sprawling city. I think New York and LA have the biggest Brony groups because people so want to belong to something they can call their own.

Bronies will communicate with you wherever you are. They will find you.

Tribeca: I read that you didn’t really have a crew while you were filming. What are the advantages and challenges of being out there on your own?

BH: I did most of shoots by myself. Every once in a while, I would have another cameraman or sound guy. I filmed this documentary all on a 7D. Plus, I didn’t seek out any funding for the movie because I didn’t want anyone else to have a say. I wanted to make this film all by myself on my own timetable.

If a job took me to Chicago for a shoot for example, I would interview Bronies during my time off. Plus, I didn’t want any of the Bronies to feel like they had to perform. I didn’t have any lights or big sets. Everything was just very minimal.

Tribeca: Another thing that surprised me was how many of the Bronies have built careers out of their fandom. Is there any other fan base that inspires this kind of creativity and entrepreneurial spirit in its members?

BH: Not that I know of. Some of the Bronies I interviewed travel around the country, doing shows or selling their art.  The Brony conventions feature famous Bronies as well as the voice actresses and the creators of the show. The talent on display blew me away. Also, Bronies are everywhere—in NASA, in the army. They are an intelligent group of human beings.

Tribeca: I loved the first 20 minutes of your documentary when you had the manliest Brony in the world break down the characteristics of each pony. His analysis was amazing and incredible to watch.

BH: One thing about the manliest Brony, Dusty Rhoades, is that he has been part of many different fandoms—even before the Internet. Now that he is a Brony, he puts considerable effort into studying My Little Pony archetypes.  He believes that the shy pony, the sporty pony and the others all have specific characteristics that make them unique and cause them to appeal to certain types of people.

So if you go to these Brony conventions, you’ll see a Fluttershy in the corner—he’s got his hoodie on and he’s shy and his favorite character is Fluttershy. Or you’ll see a bigger, muscular guy who is Rainbowdash. The most handsome Bronies are usually Rarities, the princesses. It’s really interesting how Bronies identify with particular ponies and become the character.

Tribeca: How long was the production process? How long were you traveling and interviewing?

BH: In the film, it looks like we shot quickly, but, it took about a year. I booked unlimited tickets on Amtrak and traveled wherever I wanted. I remember being on the road for a good 6 weeks meeting Bronies everywhere I went. It was a really long and difficult process though I enjoyed spending time with them.

Tribeca: With this long process that you undertook almost by yourself, were you ever in danger of getting discouraged or losing momentum?

BH: I definitely hit a lull. We sent around a rough cut of the film, and it didn’t get into some of the Festivals I thought it would. However, Morgan Spurlock watched it and immediately got it, and once the Bronies became better known, the film started to get more attention. Now, people are beginning to understand the phenomena and are coming around. The documentary has been almost two years in the making, and, ultimately, a really fun and rewarding process. I’m glad I was patient with it.

For a time, I tried to define what being a man actually means. I concluded that part of being a man means being kind and loyal—both qualities that the Bronies embrace.

Tribeca: With the exception of Ashleigh Ball, only two females were interviewed for the documentary. Is there a female presence in the My Little Pony  fandom? Are lady fans under-represented in light of the Bronies?

BH: Female fans are called Pegasisters. That’s the term. I shied away from them a little because I wanted to focus on the guys. There’s nothing really off the wall about a ton of girls liking My Little Pony. I mean, they grew up with them. They got them in their Happy Meals. Plus, Ashleigh was always my leading lady.

Tribeca: What were some of the online resources you used in doing research for the film?

BH: The one that I really showcase in the film is the Equestria Daily, the biggest Brony website. It’s huge. I think they get a million views a month or something like that, more than Gawker (Ed. note: not quite, but they are pretty big.)  They went from a blog, to posting stuff, to creating original Brony content now. I also listened to Everfree Radio, a radio broadcasting corporation that’s dedicated to My Little Pony and Brony content.

Bronies will communicate with you wherever you are. They will find you. [laughs] Youtube is huge. Tumblr is way bigger than we thought. We just started a Tumblr for the doc and more people are following us on Tumblr than on Facebook or Twitter. Also, I individually communicated with these guys over Skype.

Tribeca: Do you hope to change the public’s opinion of the Brony phenomenon with this documentary? Is that even possible?

I did want to tell Ashleigh’s story, and I think people will relate to that. If you can walk away from this doc having been entertained, then I’ve done my job. Also, if you leave the theater with a different perspective on Bronies, I’ve won a little there too. Plus, I’m only telling you what I got to see. I saw some qualities in the Bronies that I wish we all possessed. I hope that’s what people see in the film.

Learn more about A Brony Tale by visiting the film's website.