‘Maidentrip’ tells the story of Laura Dekker, the youngest woman ever to sail around the world alone, mostly from her own perspective. 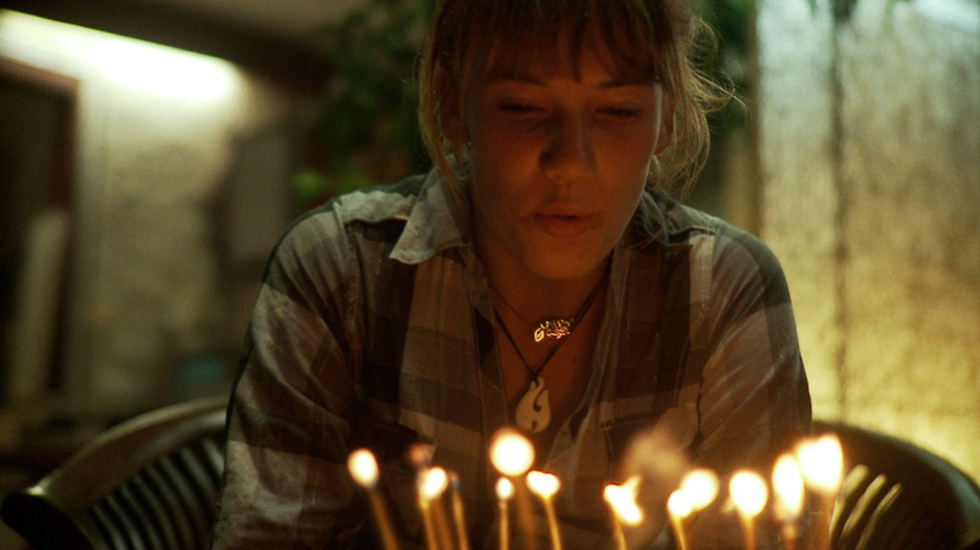 How do you make a documentary about a subject who is alone at sea for 2 years? Even more, how do you boil it down into an 82 minute film? Well, it’s quite easy. Through filmmaker Jillian Schlesinger’s collaboration with her subject, Laura Dekker, the two women were able to paint a fascinating portrait of self-discovery and maturing into adulthood on the high seas.

Funny, honest and with no pretenses, Maidentrip is as much about Laura’s passage into adulthood as it is the actual voyage. We spoke to Schlesinger about what inspired her to capture Laura’s story, the issue of access in documentary filmmaking, and why there is a current bevy of strong female protagonists in narrative films.Tribeca: You first came across Laura’s quest to be the youngest person to sail around the world through an article in The New York Times. Had you been looking for a story to tell on film? What drew you to Laura in particular?

Jillian Schlesinger: It wasn’t as if I was scouring the newspaper to find a story, but I had just finished working with a team on a documentary on Haiti and was ready to do something on my own. When I came across Laura’s story, I knew that I had found it.

Tribeca: And what drew you to Laura’s story, in particular?

JS: There were a couple of things. When I was a kid, I was exposed to a lot of seafaring stories because my dad, when he was young, dropped out of school, built a boat and sailed to Central and South America with his friends. In addition to my father’s accounts of his adventures, I read many seafaring tales, and I noticed that they were all about men. Any women in the stories were relegated to secondary or stereotypical roles if that!

So it was really thrilling for me to meet Laura. I wanted to experience a story on the sea from a female perspective. Laura is just an incredibly positive role model and powerful young woman. Her point of view is so compelling and rich. Her story could have easily lent itself to a fictionalized account, but I’m glad I was able to help her express her real adventures and her growth.

Tribeca: You mentioned how important it is for female stories to be told. Why does it seem like they can only be told in the independent film world at this time?

JS: I’ve actually been really inspired lately. Since I’ve started working in the industry, I feel like there has been a really positive wave of strong, young women protagonists coming to the screen. You can see that even in Hollywood films. If you think about The Hunger Games and Harry Potter, those stories have strong representations of women.

There was a great article about this issue in The L.A. Times a couple years ago that makes me think about Laura and her story—that strong young women are becoming trendy. I hope that is true. I remember attending the premiere of Winter’s Bone at Sundance and that, for me, was a major catalyst for telling Laura’s story. I wanted to make the film because characters with those qualities are so scarce, both in fiction and nonfiction. It went from a desire to tell Laura's story, to a responsibility to tell her story and get it out into the world.

Tribeca: I’m surprised at the amount of access you were given by Laura and her family, given that big scene in the documentary when she is so fed up with the journalist who’s with her. How did you convince her to participate?

JS: I think it all happened in a really organic way. I approached her from the standpoint of wanting to collaborate and work with her. I didn’t want to make a film about her, but make one with her. I think that level of respect and giving her a certain level of control were both very empowering to her. Also, I remember that I approached her when she had just been demonized in the Dutch media and presented in this really unflattering and inaccurate way. I was glad to give her the opportunity to tell her own story from her point of view.

Also, we never had a typical filmmaker-subject relationship. I never interviewed her on camera or required her to do certain things. We created a friendship first and a partnership second. Laura would complain to me all the time about how annoying journalists are and that would make me feel bad because on some level, I was basically doing the same thing, but just going about it in a very different way.

It went from a desire to tell Laura's story, to a responsibility to tell her story and get it out into the world.

Tribeca: It was rare to see the subject of a documentary have such control over the footage.  The film makes the audience feel that they are in the boat with her through her two-year journey. Did you put her through sort of a documentary boot camp? What instructions did you give her about filming herself?

JS: The great thing about it is that I didn’t actually give her any instructions at all. I was very fortunate because I observed really early on that she has a really unique and natural gift with the camera, both as a subject and as a filmmaker. Laura had great instincts and innately had a sense of how to shoot. I also noticed how independent and strong-willed she was, so I knew I wouldn’t be able to try and control anything.

The camera became her only companion out there and that was a beautiful relationship that I didn’t want to interfere with at all. In terms of directing scenes and content, I did give her a voice recorder with a list of topics for her to periodically talk about over the course of the trip. That was the closest thing we ever did to sit-down interviews, which were not that comfortable for her, given her previous experience with the media storm. I think it was nice for her to have that space to figure things out on her own terms.

Tribeca: How many hours did Laura end up filming of herself on the boat?

JS:  I don’t know exactly, but not as much as you would think given that she was out there for two years. It was really fascinating because as the trip went on, she started to film less. She would also do a lot more experimental things with the camera as time went on. It was really interesting to watch her evolving relationship with the camera and see her mature as a filmmaker.

Tribeca: Laura was so interesting to watch. At the end of the day, she’s barely out of childhood, but she’s so independent. Was there anything you were surprised to learn when you watched the footage?

JS: I feel like there’s an interesting relationship and tension for me between real-life Laura and character Laura. Laura in the flesh is different from the Laura being filmed.  In the editing room, I would find myself thinking about constructing this character, about how to make her likeable, and how to get people to invest in her and read her emotions. However, when I was with her, I wouldn’t think about any of that. I would just enjoy the time we had together.

When you’re putting a film like this together, you find yourself thinking about your friend as a fictional character because that’s how your audience is going to meet her and spend all that time with her. I think a lot of it was discovering how she came across as a character, versus how she came across in person.

I didn’t want to make a film about her, but make one with her.

Tribeca: I really liked your use of animated maps as a storytelling device. The audience is able to see the scope of Laura’s accomplishments. Can you talk about the design of those cards and why you chose to include them?

JS: I actually had originally envisioned that animation would be a much bigger part of the film than it ended up being. When I first started making the film, I just felt that a lot of what was going on for her out at sea would be very internal and animation would be a great way to explore that. As it turned out, the footage she shot at sea was very compelling. Plus, Laura had some interesting childhood videos, so for a lot of what I had envisioned portraying through animation, we had really strong live-action content to use instead.

The first rough cut of the film that we showed to people just had really simple, temporary maps. It soon became really clear that we had to convey a lot of geographical and logistical information and that the best way to do that would be to animate the maps themselves. The animators were so familiar and intimate with Laura’s story that they were able to incorporate her personality into the maps, making everything so seamless. It was almost like Laura drew the maps herself.

Tribeca: Last question, where is Laura now? What’s she doing?

JS: She’s in New Zealand. Laura has been traveling and is still figuring things out. In fact, she just got her driver’s license and went on a car tour of New Zealand with some friends. [laughs] She’s not quite sure of what her next adventure will be. I think she has a lot of exciting years ahead of her.

Maidentrip is now playing through January 23rd at the IFC Center in NYC.