For the remainder of 2015, we’ll be nudging Academy voters toward deserving films, performers, and craftsmen who risk getting lost in the Oscar shuffle. This week: one of the industry’s most undersung treasures claims an all-too rare spotlight. 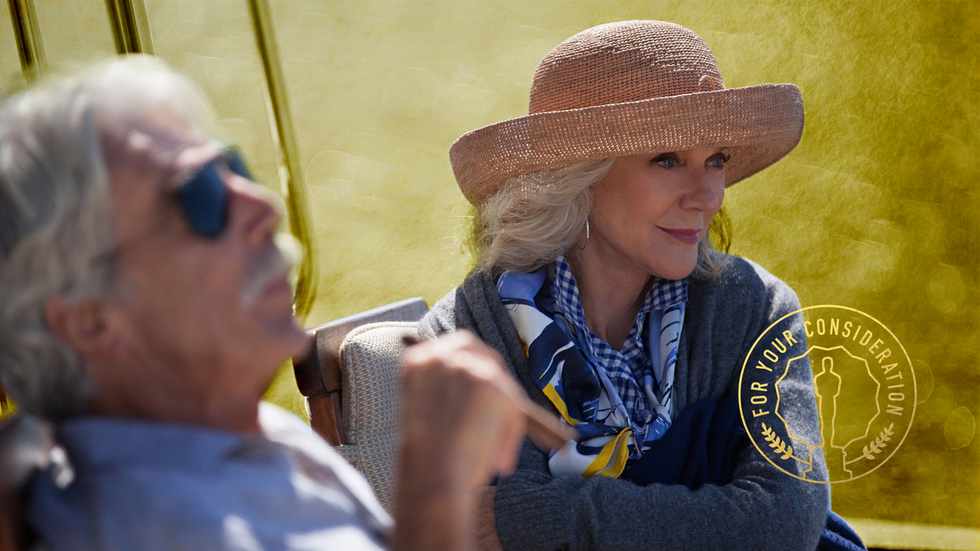 Illustration by Carly Sloane and Photo by Bleecker Street.

When was the last time you watched a film that looked at the personal, familial, and sexual lives of the elderly? Or, even better, when was the last time you watched a character-driven dramedy that handled these themes with humanistic sensitivity and in-depth complexity, instead of fart gags and boner jokes? When was the last time you saw this film led by a woman — and not just any woman, but a woman who has never won or been nominated for an Oscar and who has never even starred in a film of her own, despite being in show business for half a century this year? What if I told you this woman is nearly three-times the age of Jennifer Lawrence and that, although stunning in her own right, she doesn’t look a thing like Scarlett Johansson or Amanda Seyfried and that she repeatedly — even proudly — displays her crow’s feet and wrinkles? Now, what if I told you that, despite being made for quarters over the course of two-and-a-half weeks, this movie made over seven million dollars at the domestic box office and stayed in theaters for 17 weeks?

By the unwritten rules of the film industry, a film like I’ll See You in My Dreams has no business succeeding, much less even existing. It’s still such a rarity to watch any film nowadays, even a modestly-made indie, in which an older audience might proudly and knowingly see themselves. But to see this type of film turn out not just passably “good,” but truly and tremendously great…? That’s like finding a septuagenerian Sasquatch sitting in your local multiplex.

Intimately directed and astutely scripted by Brett Haley, I’ll See You in My Dreams is one of 2015’s most heart-stirring surprises that also contains one of the year’s most luminous star turns by the formidable Blythe Danner, who is indeed making her cinematic debut as a leading lady at 72, despite two Emmys, a Tony, and over one-hundred credits on both the big and small screens. Danner plays Carol Petersen, a seventysomething California widow, mother, and retired teacher/one-time singer who slowly begins to crawl out of her late-in-life stasis through a spontaneous romance with a debonair retiree, played with phenomenal ease and affection by Sam Elliott. He gives what is possibly the best supporting performance of the entire year, but Dreams is Danner’s show through and through and she embraces this uncommonly centralized opportunity not with the fiery hunger of a routinely-sidelined performer getting her first big role, but with the precision and tenderness of a consummate character actress who doesn’t have to prove a damn thing. Danner doesn’t need to strenuously Act with a capital-A because she knows, intuitively, that a light touch and a fine emotional subtlety are the only instruments that will best serve the film’s chosen tone and this particular screen heroine.

Through Danner’s time-honed skillfulness, Carol is indeed a heroine, but hers is a form of heroism that is unmistakably rooted in the everyday courage that allows us to wander outside our comfort zones and seek out different avenues of happiness and new ways of being, which can, of course, entail romantic or sexual satisfaction, but aren't solely that. Too many contemporary romances — and not just the comedies — naively envision the attainment of love as an ending in and of itself, an achievement that answers for everything. I’ll See You in My Dreams is credibly-written but more so deftly-played enough to know that romance doesn’t always equal fulfillment. The meeting of Carol and Elliott’s Bill isn’t the fated union of two late-age soulmates, but rather a casually lovely and deeply-felt connection that isn’t written in the stars or necessarily built to last. Both Elliott and especially Danner excel in imbuing their time together with a relaxed affinity and a levelheaded self-awareness. This means that we never see Danner squealing with all the enervating cheeriness of a woman who has landed quite the catch and just can’t be-lieve her good fortune, i.e. the type of woman who only exists in the minds of dubious screenwriters. Danner allows Carol to fall deeply, but she never surrenders her intelligence in doing so. We frequently catch Danner studying Elliott in any given scene or otherwise lost in visible thought, getting comfortable in this newfound couplehood but still taking stock of what this sudden personal development might mean for her.

Carol is a true-to-life romantic heroine fully worthy of our fondness and admiration, but she also isn’t devoid of the sharper edges that all of us possess and which transform a well-written character into someone truly unforgettable. Danner imbues Carol with a beguiling prickliness that takes shape in plenty of unexpected ways. During a speed-dating scene, we watch as Danner allows Carol to almost retreat into herself, terrified into fidgety silence when faced with her first match, who isn’t a grotesque creation or an unseemly nightmare, but rather a candid, kind, and understanding man (played nicely by Max Gail) whose eagerness still intimidates her. When Carol’s grown-up daughter Katherine (Malin Akerman) pays a visit late in the film, both actresses craft an entire knotty history of largely-unspoken mother-daughter passive-aggression. Danner, in particular, plays their scenes with a chilly remove that says more about the gap between elderly parent and adult child than many more ostensible mother-daughter movies. In moments like these, Danner pristinely presents herself as an uncanny embodier of seemingly any and all emotional states, free of any broad simplification. There’s an almost painterly beauty to shots like the ones that comprise the film’s opening montage, in which we observe Carol’s daily routine: waking up at six, calmly making herself breakfast, morosely eating lunch in her beautiful backyard while wearing what is likely the saddest-looking wide-brimmed hat ever seen on screen. But the evocative effect of these shots isn’t so much a cinematographer’s achievement as it is a performer’s. Danner appears to instinctively knows how to best occupy any given frame and, more specifically, which position or appearance will best communicate the desired feeling or intention of both her character and the shot. It’s a meticulous style of acting that actresses like Julianne Moore and Tilda Swinton are applauded for all the time, but it’s a knack rarely recognized in the work of frequent supporting actresses like Danner, whose technical gifts we might have started applauding a long time ago had roles as rich as this been more readily available.

Is it more than a little futile to hope that the critical and commercial acclaim of I’ll See You in My Dreams will pave the way for more substantial film roles for this superb actress? “Blythe Danner, Movie Star” remains too awesome a proposition to shrug off in the face of ageist Hollywood. And yet, even if future roles are not sprouting up too quickly, we should by no means ignore the treasure that already exists in the present.

There’s a generosity to Danner’s performance that could have only resonated from someone who has crafted an extensive career for herself in the backgrounds of scenes and the edges of films. She offers ample character-building time to Rhea Perlman, Mary Kay Place, and June Squibb as Carol’s hilariously mouthy retirement home buddies, as well as Judd Apatow repertory member Martin Starr, who gives a wonderfully layered performance as Carol’s pool-cleaner-turned-unexpected confidant. Danner allows each and every member of this extensively winning ensemble to shine, without ever dimming her own awe-inspiring light. And she sings, too!

So, what more could you want from a performance, Academy voters? What more could you demand from an actress who has not only contributed one of the year’s most sensational performances, but has also, in doing so, disproved an entire industry’s assumptions about characters and actors of a certain age, as well as the movies that audiences will willingly pay to see. The world is round, people, and it is full of accumulated experiences, insights, and stories that deserve to be shared, so long as there are performers as redoubtable as Blythe Danner to nurture them into beautiful and triumphant being.