Considering that an edit suite is ideally an environment where creative debate and collaboration are taking place, the default way they’re designed is, in my opinion, insane. Here's my solution - complete with diagrams. 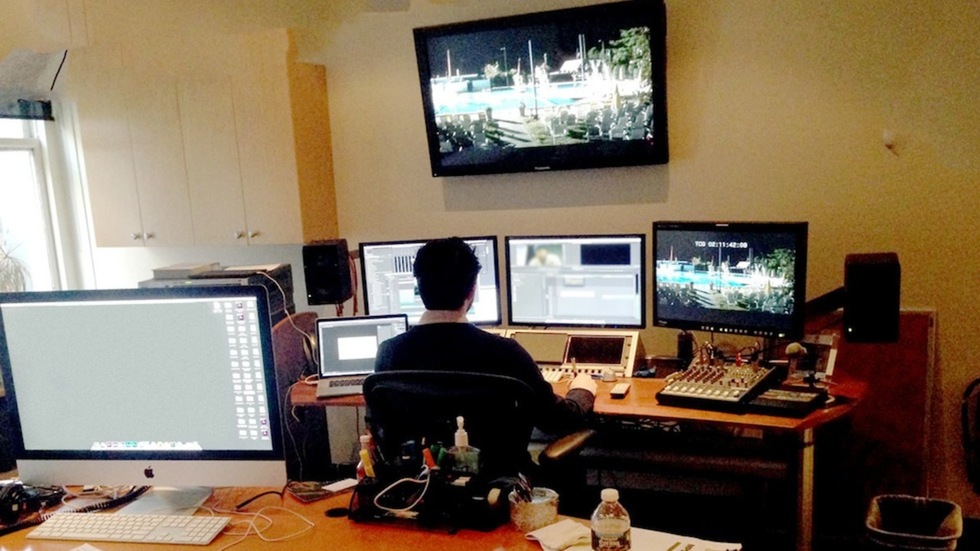 Let’s discuss edit rooms. That edit rooms are often called edit suites is one of those cute, unnecessary fancy-fications that’s really just a classy way to say “LOOK AT OUR SPECIAL ROOM!” without having to scream. Though when you do say “edit suite” to someone, make sure to slightly raise your eyebrows and squint a bit – that adds what idiots call “the gloss of intrigue.”

The counterproductive setup of a normal edit room, even at the biggest studios and nicest post-production houses is a study in separation and walls.

Considering that an edit suite is ideally an environment where creative debate and collaboration is taking place, the default way they’re designed is, in my opinion, insane. The counterproductive setup of a normal edit room, even at the biggest studios and nicest post-production houses is a study in separation and walls. The editor faces a wall. Between him and that wall is a wall of monitors. His back is turned to the rest of the room, placing a barrier between him and the director / clients / insatiable groupies demanding sexier keyboard shortcuts that he is ostensibly working WITH. This leads to a “shout things at my back” configuration which is terrible when it comes to maintaining a true collaborative vibe – I personally try to turn around in my chair as much as possible to talk to the people I’m working with and, oh you know, see their faces.“There’s got to be a better way!” you say. “There is!” I say. “Why are we talking like this?” you say. We part ways.

If setting up a room, I would have the editor and the people he’s working with facing into the center of the room – not looking directly at each other, but positioned diagonally, backs facing their respective walls. Rather then continue to break things down into extremely exciting detail, and being both a lover of schematics and an incredible illustrator, I’ve drafted up the different layouts. To help differentiate the two, the “bad” one has lightning bolts and fire to signify trouble, while the “good” one has a couple of those swirly thing girls used to draw under their names in middle school.

To me, this configuration changes the vibe in the room immensely and opens it up to a more free-flowing, constructive dialogue. Being able to talk “with” someone as opposed to “at” them tends to boost the chances that the best idea will win out and true collaboration through notes and ideas will get your project to its best place.

Adam Epstein is an editor at SNL and writes our Editor at Large column.