Brooklyn-based comedian, director and author Ted Travelstead has excelled in an impressive number of artistic mediums, and has taken a special liking to Vine. In this interview, he talks about how the app helped him create "Twins Talkin,'" one of the goofiest Vine series out there. 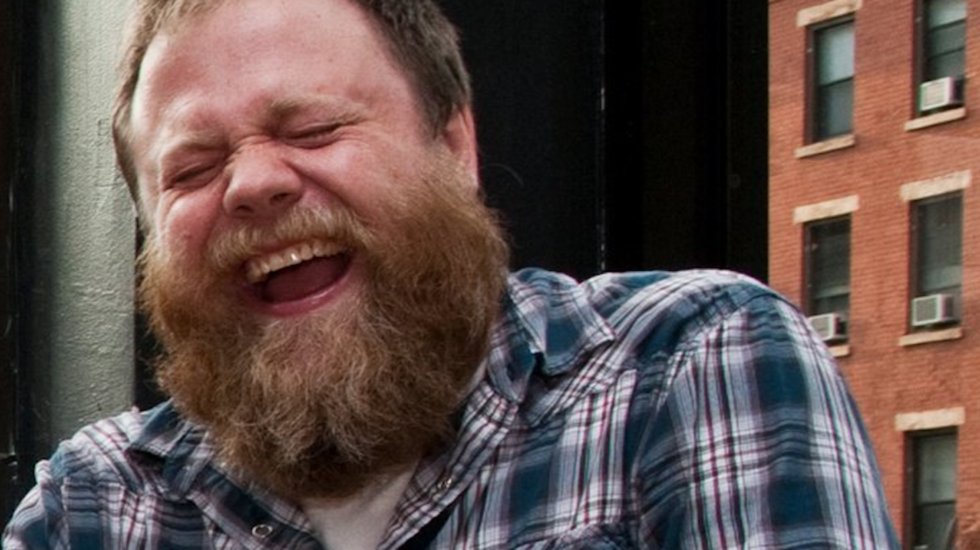 You may recognize Ted Travelstead from his videos on Adult Swim and Funny Or Die. Maybe you've seen him on Vimeo, in a short he wrote, directed and starred in. Or perhaps you've read his latest book, The Petraeus Files: All the Photos, Chats, Poems, and Other Super-Secret Emails They Don't Want You To See.

But for those who know him from Twitter, you'll probably recognize "Twins Talkin'", a Vine series that has already spanned nearly 60 episodes. In this interview, Ted talks about how Vine has proved to be a unique tool in creating comedic webisodes:

Tribeca: Most of your Vines are part of your “Twins Talkin'” series, for which you’ve done over 50 Vines. How’d you come up with both the concept and the unique tone for these Vines? If you could have a fictional backstory for the twins, what would it be?

Ted Travelstead: “Twins Talkin’” came out of me wanting to act out quick scenes and not always having access to another actor. By playing both parts I’m never at the whim of anyone else’s schedule. Often I make Vines on the spur of the moment, so playing both parts is most convenient for that. I like featuring two different sides of myself in the characters as well. It’s fun to play the cynical, world-weary side against the childlike, fun-loving side.

A fictional backstory for the twins? Backwoods orphans that somehow made it into a metropolis. The twin who’s more capable of living in the real world took an oath on their mother’s deathbed to watch over his brother. They both work at a pencil factory, one in the accounting office, and one in the production plant sweeping up and oiling the machinery.

I have ideas in the back of my head sometimes that percolate for a while, but often I’ll just shoot something when it comes to me.

Tribeca: You’re no stranger to acting in longer form videos. What advantages does Vine have over a video camera?

TT: Vine brings me back to my earliest days of shooting things where I had no editing equipment and basically had to edit “in camera,” by shooting things chronologically. Sometimes I find myself thinking of it as a live-action, three-panel comic strip. It simplifies everything.

Tribeca: How much planning goes into a Vine? Or do you try to film the moment you have an idea? (basically, what's your process like?)

TT: Not much planning at all. I love that I can do everything by myself. I have ideas in the back of my head sometimes that percolate for a while, but often I’ll just shoot something when it comes to me. As you can see, my Vines don’t rely on technical wizardry (stop-motion animation, explosions, animals flying, etc.) so doing them on the fly as I walk home from the subway seems to work fine. Also, I really try to keep it to one take. This isn’t mandatory, but I don’t want to obsess over shooting things over and over.

Tribeca: Is there an idea you’d like to try on Vine but haven’t yet? (Any future projects?)

TT: I’d really love the twins to take up midwifery, but I have yet to get the cooperation I need for that. Just kidding. I have a few ideas up the sleeve of my Vine shirt, like more recurring characters and whatnot, but they’re not well-formed enough to describe adequately.

It’s just a solitary thing I like doing on my own.

Tribeca: What Viners and comedians inspire you the most? (I definitely am reminded of Andy Kaufman!) Who would you like to collaborate with the most?

TT: I love Andy Kaufman, Steve Martin, and Martin Short, to name a few. I’m drawn to the absurd and off-the-wall. There are so many great Viners out there. A few I really love are Sunny Mabrey, Jason Nash, Lisa Bizzle, and Jacy Catlin. That being said, I don’t see myself collaborating with anyone on Vine. I’m not ruling it out, but it doesn’t interest me at the moment. It’s just a solitary thing I like doing on my own.

TT: As far as the app goes, I think it’s pretty perfect. I don’t see the need to add any more bells and whistles.

TT: I have not. There are too many options these days. I’m sticking with Vine right now.

TT: Geez, have fun! It’s a fun, goofy toy. Play around with it. It’s great practice if you want to learn to tell a story in six seconds.

Julia Pugachevsky is Tribeca's Vine Correspondent (among other things). Check out her round up of the Week's Best Vines every Friday morning on TribecaFilm.com, and come back next Wednesday for another interview with an expert Vine user (and see last week's, with Nicolas Megalis).