Interview: Kelly Reichardt On the Nuance of 'Night Moves'

"There's always the girl in the Q&amp;A who's 20 years old whose heart is broken that I've shown these lefties as being anything less than perfect." One of the most exciting filmmakers in America returns with a singular entry in the thriller realm. 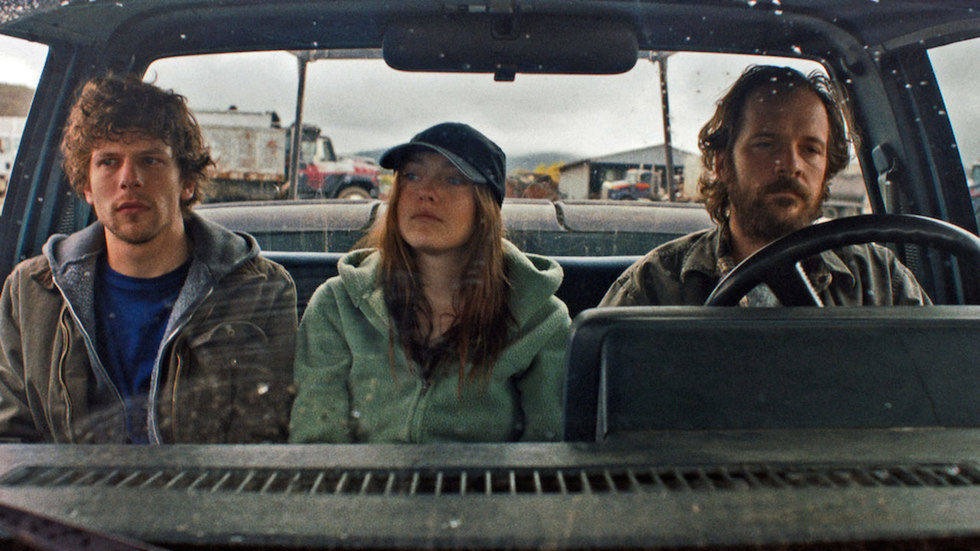 One of the most critically lauded American auteurs making cinema today, Kelly Reichardt makes her long-awaited return to the silver screen tomorrow with Night Moves, her ecologically-concerned pseudo-thriller follow up to Meek's Cutoff.

As Meek's Cutoff was both of the Western genre but not quite in it, so too is Night Moves of the world of heist thrillers - as well as, to a somewhat lesser degree, Hitchockian suspense pictures - without typically hitting all the beats such films are expected to hit. The intricately crafted film stars Jesse Eisenberg, Dakota Fanning and Peter Sarsgaard as three environmentalists who plot to blow up a dam in Oregon, and provides a nuanced story that depicts each intricate step the group takes, as well as the complex fallout from their actions.

Both a character study and a politically alive film that questions the agency available to contemporary leftists, the film manages the neat trick of addressing a number of different narrative and political concerns without ever straying from its tightly-wound narrative. I had the pleasure of speaking with Reichardt on the eve of the film's release.

The characters live in the world that they live in, so they don't really have a need to tell each other who they are or what they're thinking.

Tribeca: The film and its characters are extremely engaging, but the characters aren't presented with as much exposition as characters are typically depicted with in conventional cinema. So I'm wondering how you're able to get away with depicting your characters in the manner you do.

Kelly Reichardt: Well, not everyone thinks I'm getting away with it! You know, you pick up with them and enter their lives for such a small moment. Things are already in the works. The characters live in the world that they live in, so they don't really have a need to tell each other who they are or what they're thinking, any more than you would with your friends, your community. There are lots of clues here and there, and then there's room for the viewer, like how, when you get on a subway, you make certain calculations about someone's life based on their shoes or their briefcase, whether they look like they're running late or not, whether they look like they have money or they don't, if they're putting makeup on. And the characters do talk about each other - we know that Harmon was a Marine, we know that Deena is using her family money to finance their activities.

The language of the movie isn't its dialogue, though - that's the goal. People sometimes say to me, you know, they don't say why they're blowing up a dam, and I think, well, no, but they ride through a river filled with dead trees that was once a forest, surrounded by clear-cuts. So they don't need to tell each other what they're doing.

Tribeca: One thing that comes across is the idea that, if a character is presented truthfully, even if its just a small glimpse of their life, that should be sufficient and the audience can broaden the character in their minds, using interpretation.

Kelly Reichardt: Yeah. I mean it's like landscape - there are no beauty shots in the film, the landscape has to work in the shot. It's the same with character traits - a trait has to present itself because something's at work. Deena reveals her comfort with being dishonest when she's buying the fertilizer. It has to be in the moment, it has to have a reason to be in the scene, as opposed to just being information that is supplied.

Tribeca: I think you do that extremely successfully. You know, you talk about observing someone on the subway and trying to determine who they are based on your observations. I feel like your films tend to work in that way, with the audience in an objective position, observing the characters and coming to an understanding of them over the course of the film. As opposed to the audience identifying with the characters' desires.

Kelly Reichardt: Well, with Night Moves I feel like it's actually the opposite. I mean, my films are character films, they're not message films. I think the ride I would take as a viewer is that like them, there's part of me that thinks yeah, stuff's really fucked up right now. I can understand. I remember in the 90s, reading about the Earth Liberation Front blowing something up, and thinking yeah, great! But then you think about that more and you ask yourself the question, why aren't more people blowing stuff up? These are desperate times, what keeps us from doing that? And then you get into the ambiguities - what keeps most of us from blowing stuff up, I think, is that we're not completely sure that everything we think is right. Josh is the sort of fundamentalist character who has complete sureness in his ideology.

Like all radical groups, I think after you do something radical things tend to turn to isolation and paranoia.

To me, I think the ride would be going along with them, since I think narratively you tend to go along with someone who has a plan, when X, Y, Z has to happen, the audience tends to go along with that kind of storytelling. But then afterward, when there's no longer a plan to follow, just like it's not all in their hands anymore, things become much more complicated, and at that point in the film's narrative I feel like - like all radical groups, I think after you do something radical things tend to turn to isolation and paranoia. It's harder to drink the kool-aid with the characters after that point. I try not to make any moves that stroke what you already know or feel, but I also don't feel like they're not relatable - there are moments when I'm on board. I just don't think of the film as being as objective as, say, Meek's Cutoff.

Tribeca: Yeah, I only mean it in reference to the broader conventions of mainstream cinema.

Kelly Reichardt: Yeah. I mean sometimes people use the word slow, and it's like, what are you watching? You can't really make a film with something other than the characters you've created and the world you've created. It's all relative to what you're watching.

The shit the BPs of the world are doing is way more radical than anything in the movie - but you know, that's all legal.

Tribeca: As far as American narrative cinema goes, your films are some of the most successful at depicting the temperature of the contemporary left. Without giving away any crucial narrative details, let it suffice to say that I think the film illustrates a central paradox of being a leftist and pursuing resistance of some sort against society at large.

Kelly Reichardt: Well, it's not a morality play, it really is a character film. They happen to be political people. The film, to me, is really also about how people operate when they're in a community versus how they operate on their own. There's the community of the co-op, there's the documentary film screenings community, the people who go camping in their RVs, people who enjoy nature while exploiting it, jet-skiing in a reservoir that used to be a forest. So there's all these different communities, and there's a lot of ideas floating around in them. There's different levels of radicalism. Some people grow their own food and only use rainwater. I hope that the film is asking questions. Obviously, the true radicalism is a dam that takes what was once a forest and makes it a playground for sports. I use electricity, but most dams aren't providing electricity. The shit the BPs of the world are doing is way more radical than anything in the movie - but you know, that's all legal. So there's all these different levels of what's radical. I think the film is asking, if their actions are not the right response to the state of things, what is? Are there any good answers out there? There's no message, but if there is, it's that question - it's not a message, it's a question.

Tribeca: It seems difficult, what you've figured out. So many films about politics have trouble, because art is about ambiguity and nuance and politics is about the compelling lack thereof. What is your approach to making art that concerns the political?

Kelly Reichardt: I think you can't really have an agenda. I think you have to put everything aside. There's always the girl in the Q&A who's 20 years old whose heart is broken that I've shown these lefties as being anything less than perfect. I think the thing is, even using the genre gives you this frame that people are familiar with, and working against what your expectation is, the expectation one has going into a thriller or a heist film, not delivering on that expectation has a certain kind of subversive thinking effect. Once you rattle that, if you have an articulate frame, you have a place for the ambiguities to live without it all being a big mess. I think the filmmaking has to be really articulate, it has to have lulls of ambiguity in it.