This week in our series of interviews with professional Vine creators, we talk to Frank Danna about making promotional Vines for companies, the pre-production process for his stop motion Vines, and his tips for conquering "Viner's Block." 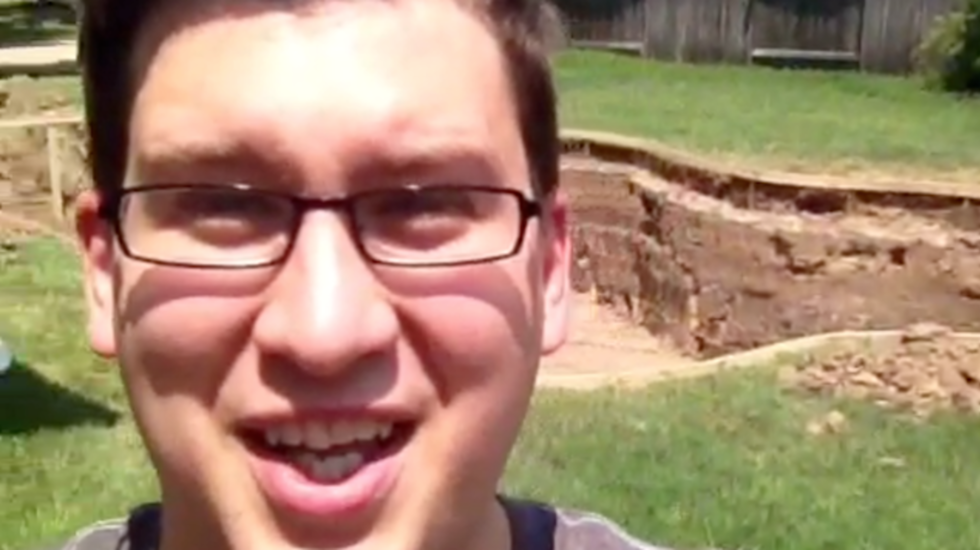 Frank Danna has a knack for masterfully crafting stop-motion Vines, so much so that he's been hired to created them for nearly a dozen brands including Slim Jim, Walls360, Elanco, social media startup Yappem, and MyShoebox. When he's not Vining, he works as the Communications/Creative Director for a Houston-based mobile app company called Onseeker Technologies. If he ever gets a chance to be in the same room as Nicholas Megalis' mustache, he fears he'd immediately pass out from overexposure to awesomeness.

Tribeca: You use a lot of ordinary objects in your Vines and create cool stop motion clips. What does it take for something to inspire you enough to create a Vine?

Frank Danna: Thank you for the compliment! Early on, I raided my wife's craft closet (which she may still be slightly peeved about), and used things within arms reach like snack food, fruit, and my own shadow to craft Vines. From a 50,000 foot view, my inspiration comes from the technical limitations of the platform. Six seconds feels like the perfect amount of time to craft a unique and compelling story. I don't view the time limit as an artistic restraint; I view it as a level playing field for creative autonomy. On a more personal level (the 6 foot view), I draw inspiration from a simple five word question: "Wouldn't it be cool if?" Many of my ideas for Vines start with that question:

"Wouldn't it be cool if I peeled a banana using a shadow of my hand?"

"Wouldn't it be cool if I consolidated all six season of LOST into a six second loop?"

That (seemingly) simple question has inspired me time and time again to simultaneously solve challenging problems and create art on Vine. I absolutely love it.

Tribeca: You’ve made Vines in honor of (RED), Arrested Development, Lost, Vine on Android, Daft Punk, etc. What company or organization would you love to have you make a Vine for them?

FD: My wife and I have been longtime supporters and advocates for a categorically fantastic charity out of NYC called charity: water. A few years ago we hosted a 5K run+walk to raise money for clean water projects in developing countries, and later gave up our daughter's birth day (her actual day of birth) as a campaign to support them during their yearly September campaign. Truth be told, I'd love to work for their organization in the future, but Vining for them would be just as terrific.

Tribeca: How much planning do you do before making a Vine? Or do you spend some time experimenting with camera angles/lighting/etc until you form an idea? (Essentially, what’s your process usually like?)

FD: I usually need to see the entire Vine in my mind before I begin shooting. Once I ask the question "Wouldn't it be cool if?", I have to make sense of how I'll make things work on a technical level. If I can deduce how the mechanics of capturing the Vine will work, I can then take it to the next stage of development. Whether I'm building a Vine for a brand or for personal use, I typically begin with rough sketches or written walkthroughs that help me keep the story of my Vine intact and insure consistency from start to finish.

Storyboarding generally takes anywhere from fifteen minutes to around an hour and is purely contingent on the complexity of the Vine or the input from others required before shooting. Once I've storyboarded the concept, I'll begin to work on creating or customizing any items needed for the Vine. Camera angles are usually listed in the storyboarding phase, but lighting (if necessary) comes last, just before filming.

"I don't view the time limit as an artistic restraint; I view it as a level playing field for creative autonomy."

Tribeca: What’s the average amount of time you spend making a Vine?

FD: From beginning to end (storyboarding, pre-production, content gathering or creation, shooting, and posting) it ranges from 45 minutes to upwards of three or four hours. My 'Fruit Ninja' Vine took around three and a half hours to create from beginning to end.

FD: Not actively; however, I have dabbled in graphic design and photography/video-graphy in the past. I (like many of my contemporaries on Vine) had never tinkered with stop motion until I began experimenting with the technique on Vine. Having a rudimentary knowledge of photography basics certainly helps from a stylistic/storytelling perspective, but a majority of what I create on Vine has ultimately come from trial and error within the application.

Tribeca: Who are your favorite Viners?

FD: The list is fairly extensive (and I'm sure I've forgotten many of them, but here are a few I can think of off the cuff):

(Just kidding, I like all of these guys equally.)

If you're having 'Viners block,' you can start with the question "Wouldn't it be cool if?" and go from there.

FD: I'd love the ability to record audio separately and overlay it onto the video loop. To keep in concert with current limitations, the audio needs to be recorded from the device in the same way video is captured, but this feature really could help the entire user base craft more refined Vines. I'd personally use it for narration, voice overs, or to play an audio clip that works in tandem with my stop motion loops.  The only way to capture semi-clean audio alongside stop motion is if you happen to be Ian Padgham or have the equipment necessary to slow the audio track down.

Tribeca: Now that Video on Instagram is an option, do you plan on experimenting with the new app?

FD: Yes! I've enjoyed experimenting with it as a new storytelling medium. On a professional level, I was able to complete an Instagram Video for Slim Jim where I used my shadow hand technique to unwrap one of the meat sticks. The idea worked on a technical level, but it seemed much slower moving and less fluid than stop motion capabilities found natively on Vine. I realized from the resulting video that the platform is probably geared more toward longer clips strung together than stop motion animation. Meagan Cignoli recorded the same video on both platforms and experienced similar results. At this current juncture I'm using it for more personal family-oriented stories and behind the scenes clips from my Vine shoots.

FD: Start by using Vine to capture moments you're passionate about. It may end up being a rant about a burrito, and that's totally cool. It could be a welcome home Vine for your new puppy, a drive in the summer breeze, or a song about gummy worms. One way or another, each person using Vine is able to share things they have feelings for in unique and creative ways. You'll quickly discover what you like to share or create on Vine if you begin by recording your passions. If you're still having 'Viners block', you can start with the question "Wouldn't it be cool if?" and go from there.

Julia Pugachevsky is Tribeca's Vine Correspondent (among other things). Check out her round up of the Week's Best Vines every Friday morning on TribecaFilm.com, and come back next Wednesday for another interview with an expert Vine user (and see last week's, with Nick Confalone).