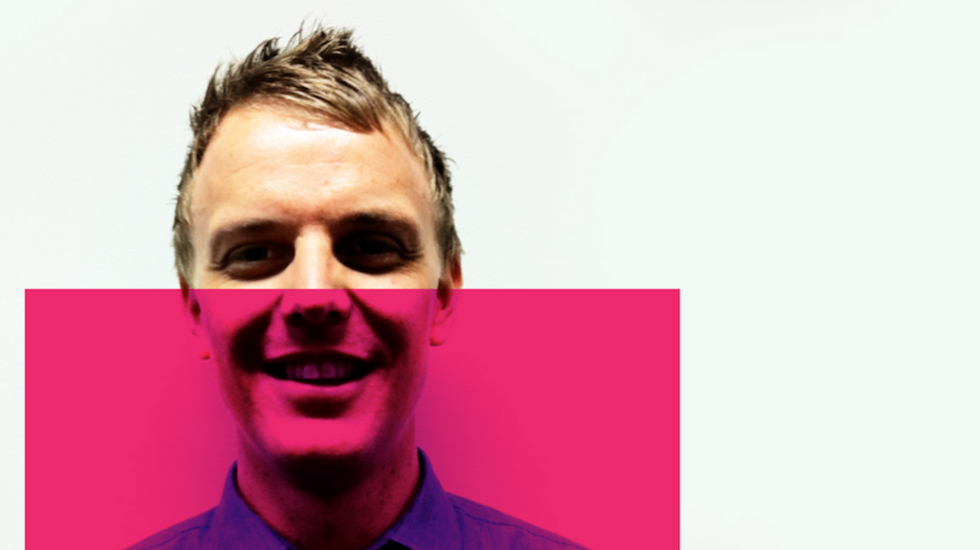 Matt Willis, also known as @yelldesign on Twitter and Vine, hails from Fitzroy, Melbourne Australia and has worked for the last 10 years in graphic design, marketing and, more recently, as a design consultant. His design studio, Yelldesign, which specializes in stop motion animation and Vine, counts Grammy-winner Pepe Aguilar, Chevrolet, Viacom, and even yours truly among its growing clientele.

Willis recently sat down and talked to us about his brand of stop motion and how to be noticed on Twitter without specifically catering your work to get likes and retweets.

Your Vines combine hi-tech features with household objects -- like having an iPhone turn into chocolate or a cup make Google search items come to life. What's the inspiration behind this?

Vine is an ideal platform for stop motion animation and perfect for putting inanimate objects in unusual situations. Inspiration can come from anything around you, but I find really boring, everyday objects make the best vines. If you can take a common household item, alter its position or form with a small quirk, and get a smile in 6 seconds, you’ve got a great Vine!

How much planning goes into a Vine? How soon after you have an idea are you ready to film? And how long does the average Vine usually take you? (Basically, what's your process like?)

It’s a pretty addictive app, so planning is happening all the time. I can rarely shoot a Vine at the time I get the initial idea. I have a working list of ideas that’s added to daily. Sometimes I have a load of material to run with and I can’t Vine it fast enough. Other days you’re scrolling through the list with nothing shouting out.

Back when the app first launched, Vines seemed to take around 45 minutes to complete. These days I plan and prep for at least an hour or two, then depending on complexity the shoot usually takes around 40 minutes. The bar is set higher every day in the Vine community and we all feed off each other’s work.

By now, you've created Vines for quite a few clients. When did Vine stop being a hobby and become a mode of income for you? Or did you immediately know that Vine could be a great way to create advertisements?

Client work has really taken off in the last few months, I certainly didn’t go out with the intention of making money or shooting ads, but somewhere along the way I realized that my style of work is well suited to marketing and promotional spots. I like to put the object in clear light and focus sharply on the features, so this sits well with ad work.

There’s nothing quite so nerve-wracking as shooting a 5-hour client Vine in one pass, then hitting the green button and hoping you didn’t bump a light or something.

How do you think Vine will change how companies advertise their projects in the future? And is there a client you're dying to create a Vine for?

I guess companies are used to 15 or 30 second spots to showcase their products. 6 seconds in Vine can seem like a short time, but I like to think of it like a really long print ad. Think of a billboard, but you’ve got 6 seconds to animate it! You can do a lot in 6 seconds, but it’s still a billboard, so don’t overdo it.

A client I’m dying to create a Vine for? Probably Apple, I can’t deny loving their products, but I doubt that would come about, so I’ll say Camper, that way they can pay me in shoes!

What Viners inspire you the most? Is there anyone you'd like to collaborate with?

The community is huge, and there are thousands of well-established artists, but the level of new talent coming onto Vine constantly surprises me. More recently I have been mesmerized by art from Hampus Hagman, @ViandVie, and @xavieralopez. And if I ever need a laugh, @simplysylvio and @keelayjams are perhaps the most beautifully absurd Viners out there.

Forget about hassling people for ‘follows’ or ‘likes’; just concentrate on making the best content you can.

If you could change one thing about Vine, what would it be?

I guess a preview somewhere along the way would be beneficial. There’s nothing quite so nerve-wracking as shooting a 5-hour client Vine in one pass, then hitting the green button and hoping you didn’t bump a light or something. I don’t think it needs any more bells and whistles, its simplicity is really its strength.

Have you or do you plan to film anything on Instagram Video or MixBit, now that those are options?

I have done client work on Instagram, but I prefer not to use it for my personal work. Instagram is a killer app for sharing photos, but stopmotion video is not its strength. Vine is light & quick, and responsive to tiny taps. The looping element is great too; it’s a device that can be exploited.

What is one piece of advice you’d give to beginner Viners?

Forget about hassling people for ‘follows’ or ‘likes’; just concentrate on making the best content you can. The community is engaged and active, and if you’re making great Vines, you will be found.

Julia Pugachevsky is Tribeca's Vine Correspondent (among other things). Check out her round up of the Week's Best Vines every Friday morning on TribecaFilm.com, and come back next Wednesday for another interview with an expert Vine user (and see last week's, with Ted Travelstead).