Jeremy Workman Talks About Finding His ‘Magical Universe’ In Maine

How much of great documentary filmmaking happens by chance? We talk to filmmaker Jeremy Workman about his friendship with artist Al Carbee and the film that took him more than a decade to finally complete. 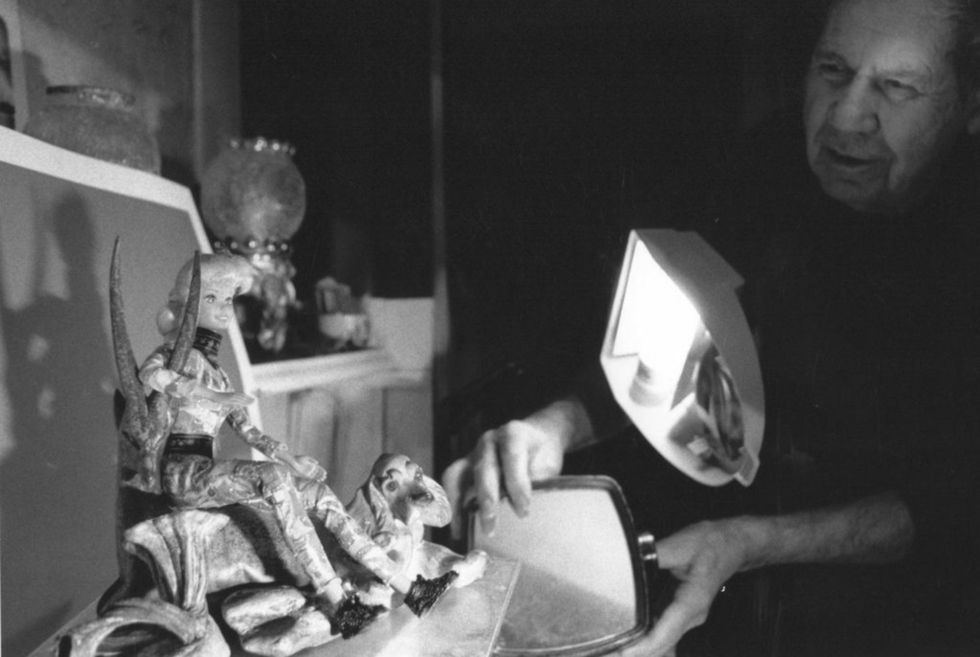 Initially, you may find the subject matter of Jeremy Workman’s Magical Universe somewhat creepy. Who could blame you? In this unusual film, the documentarian chronicles his more than decade long relationship with Al Carbee, a solitary 88 year old artist who has sequestered himself in his sprawling home in Maine to create art centered around Barbie Dolls. We promise that this is not a horror movie. Magical Universe is far more than just an interesting study of a reclusive and strange artist. Through his friendship with Carbee, Workman sets out to demonstrate the power of art and creativityto change lives.

We chatted with Workman about his short film that inspired the feature documentary, the oddities of New England, and working up the nerve to appear in the movie.

Tribeca: I’m from Maine myself and I wasn’t surprised to learn that an artist like Al Carbee lives and works there in obscurity. What is it about New England—Maine in particular—that lends itself to these types of eccentrics?

Jeremy Workman: I think definitely there’s a Maine thing. I love Maine. I’ve gone there for years and years. There’s something about Maine that’s really unique. It’s a state that’s off the grid but not in the same way as Alaska where people identify it as a state that’s does its own thing. Maine is this giant state where residents have their own distinct opinions and values. It doesn’t surprise a lot of people that there would be someone like Al in Maine, living for years in his house doing his own art projects. People in Maine are private. They don’t mess with other people. It just sort of adds up.

Tribeca: How did you first come across Al?

JW: It was in the late 90s when I was vacationing in Maine with my new girlfriend, Astrid. A friend of mine had just photographed Al for a newspaper article and told me I had to meet him. There was no big plan or intention. My friend just gave me his address and sent me on my way. So I drove over there, knocked on the door and a strange old man opened it. I had a tiny little video camera, and I just started filming with Al’s permission. That was the beginning of this long journey. My girlfriend and I eventually became Al’s closest friends and his only link with the world.

I want audiences to realize that amazing, extraordinary and wondrous things can come from the unexpected.

Tribeca: You’ve been working on this film since the 90s. As an artist yourself, how do you keep yourself motivated?

JW: What’s interesting is that I didn’t initially think of it as an opus about an artist, but that’s what it became. We had been communicating with him for years. We sent videos to him, and then he went to the Salvation Army, got himself a camera, and started sending us videos. We really became pen pals of sorts with an 88-year-old outsider artist who loves creating Barbie-doll art. It was never intended as a big documentary. Only later did I think, “this story is incredible.” Al and his art are so unique that I knew it was my job to share his work with the world. In that sense, it’s an accidental movie.

Tribeca: As a documentarian, did you ever have to draw the line between friend and subject?

JW: That was very tricky in making the film.  A good portion of the film is about me and my relationship with Al. Our relationship became intertwined with the DNA of the story. All of these things started happening for Al partly because of his friendship with me and my girlfriend. It became such a part of the movie that you couldn’t really tell Al’s story without our friendship being acknowledged.

I don’t think I’ve ever seen a relationship like mine and Al’s explored in a documentary before. We have seen documentaries in which filmmakers appear in front of the camera and tell the story of their father or grandfather or even their friend. With this project, my role in this story became part of the main focus of the film.

Tribeca: Was it intimidating for you to put yourself out there with Al?

JW: That was a big hurdle for me. I had made documentaries about the obsessive personalities of artists—but I had never considered putting myself in front of the camera. It was definitely something I had never done or considered doing. But as I was looking at footage of Al, I saw that he was constantly turning to me and talking to me as a friend.  Also, things were happening for Al as a result of our friendship, and that created this incredibly unusual dynamic between us. He sent video letters to me as a friend, and our correspondence became the backbone of the documentary.

Tribeca: You made a short film about Al before embarking on the feature-length doc, Magical Universe. What advice would you have for filmmakers looking to making their shorts into features?

JW: I made a four-minute short film without any big ambitions. I didn't want to use it to break into the business  as a calling card. I just wanted to make a cool little short film about this unique personality. It snowballed from there and developed into a one-of-a-kind feature. It almost shows the power of not just documentary films, but documentary shorts. I made that short for no money, and it led to these incredible things that happened for me as a filmmaker and to Al.

I also think this film champions documentary because it shows the good things that can happen when you make a documentary. Al’s life changed because I made a short film. That first small project changed everything for both of us.

Tribeca: How many hours of footage did you accumulate over the years?

JW: It was a strange pattern of going up to Maine, sitting down with him, filming him and receiving video letters from him as well. I ended up with 100 hours of footage; most of it was video letters.

Tribeca: I imagine there were many different directions you could have taken with Magical Universe. How did you find that core story?

JW: At the beginning our friendship, I thought Al was a crazy kook [laughs]. I thought this was a crazy weird strange old man playing with Barbie dolls. Over the course of years, we became friends, I became integrated into his life, and a weird thing happened to me. I realized he wasn’t a crazy kook but a visionary artist. When I thought about structuring the film, I knew I wanted it to have the same arc for the audience that I experienced for a decade.

I needed audiences to take the same journey I did…in just 80 minutes [laughs]. At the beginning of the movie, they feel Al is one way and by the end, they do a total 180.

Al and his art are so unique that I knew it was my job to share his work with the world. In that sense, it’s an accidental movie.

Tribeca: You directed and edited the film. What is the most challenging aspect of pulling a double-duty like that?

JW: For me, it’s a very natural process. If I’m shooting, I’m always thinking of editing. There were certainly challenges on this project. The guy is kind of strange [laughs]. There were rough cuts where he seemed especially creepy, but it wasn’t because he did anything creepy, it was just how it was edited.  I had to be careful not to judge too much. There’s a neat moment in the movie that messes with the form. Astrid comments on the movie and says it was too one-sided and that he was coming off too weird. That was a real conversation we were having, and I wanted to include it because that was the kind of movie I wanted to make.

Tribeca: I loved Astrid. She’s so great in the movie!

JW: Me too [laughs]! Al was almost obsessed with Astrid in a way that seems weird at first. He calls her a “real-life Barbie.” How strange and weird!  It’s really Astrid who steers the movie in the right direction.

Tribeca: I like how she just tells it as it is.

JW: When you see Astrid talking about Al, she’s not creeped out. If she doesn’t think he’s creepy—and she’s been in the guy’s house—audiences will take a cue from her and warm up to him much more easily.

Tribeca: What do you hope audiences take away from Magical Universe?

JW: I want audiences to realize that amazing, extraordinary and wondrous things can come from the unexpected. Astrid and I randomly met this guy, and we helped to change his life. That’s something that I hope people get. This artist in Maine making Barbie doll art and this unlikely couple in New York City came together and something happened that seemed predestined.  I hope this documentary helps people appreciate the strange connections in the universe, the extraordinary rhythms in life that make extraordinary stories out of the mundane.

Magical Universe is available to rent on both VOD and digital platforms. If you live in NYC, you can catch the film at the IFC Center all week long! Jeremy will do Q&As after the Saturday (11/1) show at 8:10PM and Sunday (11/2) at 4:35PM.