Jordan Rubin on ‘Zombeavers,’ Classic Effects and the Impact of Social Media

Screw ‘Sharknado.’ ‘Zombeavers,’ a clever homage to the great 80s horror comedies, will have audiences rolling (and screaming) in the aisles. 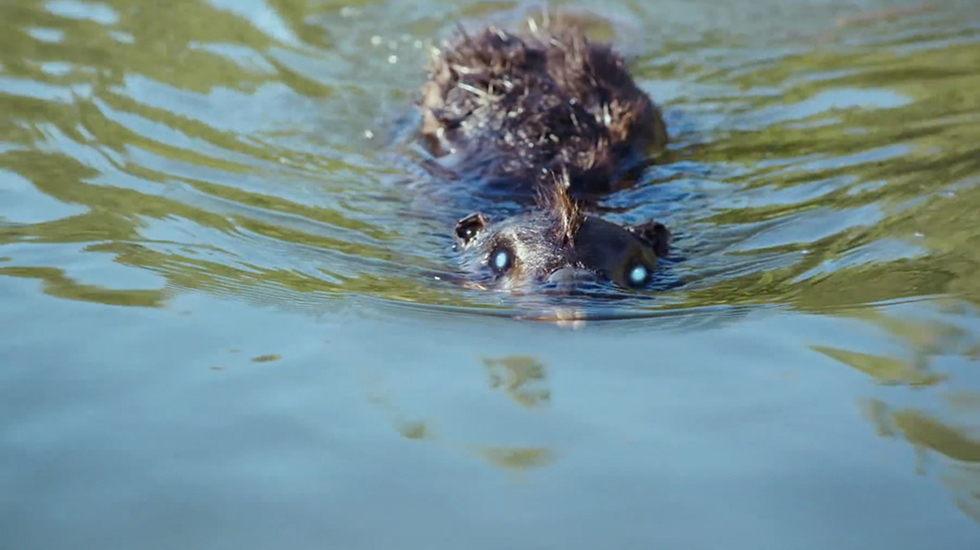 The trailer for Zombeavers garnered 2 million views in its first two weeks alone, thanks to a big push by some prominent Twitter users like Jonathan Ross, Judd Apatow and Dane Cook. We spoke to director/co-writer Jordan Rubin about his background, creature effects and why he didn’t go the Kickstarter route.

Tribeca: Given your experiences writing for The Man Show, Late Late Show with Craig Kilborn, and Last Call with Carson Daly, you obviously have a lot of familiarity with television comedy. At what point did your interests extend to film?

Jordan Rubin: I started being interested in film long before I became interested in TV. All through high school, I made films, and when I was in a television, media, and film program at Northwestern, I focused on film as much as I could.  I started doing stand-up comedy which led me to a new world of sketch comedy and writing/directing for television. In the back of my mind, though, I have wanted to get into writing and directing films.

I needed a little bit of a push, which came from working with Judd Apatow. I also wrote the opening film for the Oscars—with James Franco and Anne Hathaway—that spoofed Inception. Judd urged me to direct a script I was writing with Jon and Al Kaplan (who also wrote Zombeavers), and even though that project fell apart, Judd really lit a fire under me. So when we wrote Zombeavers, I attached myself as director.

Tribeca: How did you first meet Al and Jon Kaplan?

JR: I can’t sing their praises enough. They are so damn talented! I’m best friends with their cousin, Arthur Roses, who’s actually a second AD on the movie. I remember we all went out one night and I thought, “Those guys are hilarious! I want to hang out with them more!” They gave me their number. We started hanging out and working together.

I realized that our film would call for a slightly bigger budget than is usually funded by Kickstarter. If you’re not Zach Braff and you don’t have a following, it’s much harder to drum up that kind of money.

Tribeca: How did the idea for Zombeavers come about?

JR: They actually had been thinking about it. One day we were talking about making a horror comedy, and they laughed and said, “What about Zombeavers?” I thought it was hilarious, but they were completely serious.

JR: We were going for the vibe of movies like Reanimator or The Thing, or Child’s Play, or even Gremlins.

Tribeca: From the trailer, you can so appreciate the lack of horrible CGI. The puppets and man-made effects are just awesome.

JR: I wanted to go old school and use 80’s effects. Hopefully, the throwback will excite a lot of the genre fans. Though, there are some drawbacks. When you have a limited time to shoot, like we did, the zombeaver puppets were tough to work quickly. Our schedule was so tightly packed everyday, and I was always trying to get an extra shot in. With the budget we had, we had to do set-ups very quickly.

There were a couple different beavers, but our “hero” beaver always looked the best. It was totally animatronic and required four people to operate it. It took at least 30 minutes to set it up and multiple takes to make sure all the puppeteers were in sync. I would have to make a judgment call very quickly on whether we would go with the hero beaver or move on to a different one that was easier to work.  I wish I had the time to have the hero beaver in every single shot.

Tribeca: You worked with the FX company Creature Effects on the beaver puppets. Can you talk a little bit about that process with them?

JR: Yeah, they were just amazing. I was like a kid in a candy store when I visited their offices. They’ve really done it all from classic stuff from the 80s and 90s to The Lone Ranger.

JR: [laughs] It’s such an honor to have our zombeavers on the Creature Effects shelves. Plus, the process was great. We didn’t have a lot of time, but they hit the ground running. I met with them in the beginning and told them what I wanted, and within a few days, they had these amazing sketches to show me.

Also, they were totally open to working with me on changes. I had a distinct vision of what the zombeavers should look like, and they really did everything they could to match it. They would email me samples, and I would give them notes and stop by at least once a week as we really got started on the production.

After we did the initial drawing with the sketch artists through the various stages, the zombeavers were then made into a mold. During the process, I would come in and give directions, asking them to  “tweak this a little bit, make it a little scarier, etc.” Once they got our sign off, they make the mold and it becomes the beaver. After that, they start working simultaneously on the animatronics and the rods that work the puppet. It was like a big fun house—even the seamstress who did the fur fitting was there

Tribeca: You’ve got a great cast full of up and coming talent like Rachel Melvin, Cortney Palm, Peter Gilroy and John Mayer! Can you discuss the casting process?

JR: It was a pretty traditional casting process, though I definitely called in a favor or two [laughs]. We had about a month of auditions. We had some pretty intense callbacks to find the right dynamic and chemistry among the cast members.  Improvisation was important too, especially with a film like Zombeavers.

We were also lucky to have John Mayer and Bill Burr in two funny cameo roles. Both were really excited to do the movie. Also, Rex Linn, this great character actor, actually auditioned for his part and was just amazing.

Tribeca: I was  surprised that you didn’t use Kickstarter to fund your film. The concept of Zombeavers, to me, seems ripe for crowdfunding. Why did you choose to go the traditional funding route?

JR: Al, Jon and I wanted to try the traditional route, even though that had failed us before. We were not deterred. We sent out the script to a number of places. In some cases, it was a total “no;” others invited us to pitch the project. Our agent sent out the script and set up meetings. In the back of my mind, I always knew we could raise the money—whether through traditional channels or crowdfunding. It was a pledge we had made ourselves once we finished the script.

I would have done Kickstarter for Zombeavers if we hadn’t found another way. I’m definitely not opposed to crowdfunding. It helps create and build an audience. You can gauge if people want to see the movie you want to make.

Sometimes the traditional campaign model takes forever, and there’s so much to pull you away from the project.  However, I wanted to try the traditional way first. Once I really got into budgeting, and talked to people about how to do this effectively, I realized that our film would call for a slightly bigger budget than is usually funded by Kickstarter. If you’re not Zach Braff and you don’t have a following, it’s much harder to drum up that kind of money.

Tribeca: I think it’s fair to say that Zombeavers exploded online after that amazing first trailer. People like Eli Roth were retweeting it and sharing it. Social media is obviously going to play a huge role in the marketing campaign. How can you, as a filmmaker leverage the buzz?

JR: I’m not going to give you all my secrets [laughs]

When a thing goes viral, it’s great for your movie, but you’ve got to be careful about over saturation. You’re always walking that line.

Tribeca: [laughs] I’ll try not to jinx it!

JR: We got a lot of attention very quickly because we managed to expose just the right amount of stuff in the trailer—just made it fun and kitschy. Also, we had a lot of personal relationships to help generate the buzz. I have a bunch of followers on Twitter and friends who understand the comedy I’ve done through the years. However, they wouldn’t have retweeted the trailer if they hadn’t found it funny. Also, people like Dane Cook and Whitney Cummings have a lot of reach beyond social media.

It was interesting for me to learn that it’s not necessarily the people with a lot of followers that matter in a viral marketing campaign. It’s the people with the followers who are true fans. Jonathan Ross, who is basically the Letterman of England, tweeted about it and his followers responded.

We have a lot of momentum going into Tribeca, which I’m excited about, and I hope we leave with even more.  We definitely want to do more viral and fun stuff for the internet, as well as releasing a new trailer or even behind the scenes stuff. When a thing goes viral, it’s great for your movie, but you’ve got to be careful about over saturation. You’re always walking that line.

Tribeca: You’re one of the first filmmakers I’ve talked to who understands how to build interest in your project on the web and through social media platforms.

JR: It was interesting to see the spider web social effect. People with big followers have bigger followers who follow them. It’s a domino effect. I was interested to see that influential people were picking up vibes about the project from the web.  The Hollywood Reporter, Deadline, and Entertainment Weekly, all covered our film, which usually doesn’t happen until you hire a publicist.

Tribeca: So what can audiences outside the Festival expect from Zombeavers?

JR: I think you can expect a horrific and hilarious ride in the best way possible.

JR: I promise I just made that up off the top of my head.

JR: It runs the gamut from scaring people to making them laugh out loud, from disgusting them to horrifying them. I showed it to my father and he had to leave the room because all the blood made him uneasy. My mother said, “I don’t know what to say. I would never watch this and I can’t recommend it to my friends, but I support you.”

Tribeca: I think that’s the best reaction you could hope for from your parents.

JR: Sure. They can support me, but not recommend it [laughs] but this movie is not Sharknado. People are going to see it as more of a 80s horror/comedy like Gremlins or Child’s Play. And that’s a good thing.

If you don't have tickets to this Saturday's TFF 2014 screening of Zombeavers, you can try your luck in the RUSH line.