Recap: The 6 Best Moments From Kevin Spacey's Q&A with Charlie Rose at TFF 2014

Here are our favorite moments from Spacey's premiere and Q&amp;A with Charlie Rose, from his insights on film versus theater to why he keeps a green laser pointer with him when he's onstage. 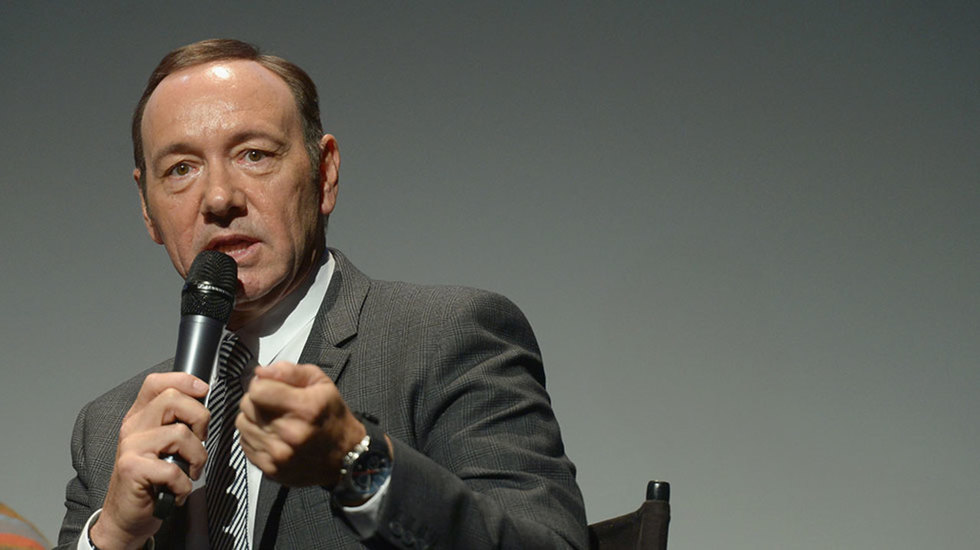 At the peak of his fame (up until that point), in 2003, Kevin Spacey walked away from Hollywood, heading to London's famed Old Vic theater to start a ten-year stint as its artistic director. The move may have puzzled some, but anyone who may have been bewildered by the decision will have that confusion cleared up by Now: In The Wings On A World Stage, Jeremy Whelehan's documentary about the ten-month tour around the world of a Sam Mendes-directed production of Richard III that Spacey undertook with the Bridge Project, a theater company consisting of members of both the London and New York theater worlds. A fascinating travel doc that simultaneously explores Spacey's love for theater and deep physical commitment to playing the titular king, the film had its world premiere at TFF Monday night. Here were some takeaways from Spacey's talk with Charlie Rose after the screening.

While Spacey loves working in film and TV, there's something particular to theater that he finds most stimulating as an actor. "No matter how good an actor is in a movie, they'll never be any better," he explained. "With theater, your performance can always improve." He explained that the possibility of improving on one's performance night after night is one of the great motivators for his love of theater.

2. Theater isn't dead - contrary to what some may say.

"The theater has been supposedly dying for centuries - that's what some have said - and yet it keeps limping along," Spacey stated. He pointed out that Broadway is the second most successful entertainment franchise industry in the United States, and postulated that "As long as people want to keep telling stories, the theater will keep going."

3. There may soon be a way to experience theater performances after the fact.

After an audience member questioned Spacey regarding the fact that all of the hard work he put into Richard III is now gone forever, Spacey responded, indicating that he believes there is some value in capturing theater performances with video. He pointed out that doing so in an exciting fashion can be difficult, as the act takes a three-dimensional medium and relegates it to the realm of two-dimensionality, but he opined that perhaps in the future a new technology might be able to capture theater performances more engagingly for posterity.

4. There's a unique bond between actors in theater.

Much camaraderie, joyous and profound, is on display between the company members in the doc, and someone asked Spacey why such camaraderie isn't present to the same degree between film or TV show casts. Spacey explained that this is in no small part due to logistics - the way films and TV shows are scheduled means that the entire cast is rarely all in the same place at the same time. It's this special capability of theater that makes it such a fertile bonding ground for actors.

5. There's a direct link between Richard III and House of Cards.

Spacey credited his work with Shakespearean drama with helping him prepare to play the iconic Francis Underwood on House Of Cards. Shakespeare, Spacey explained, was the original purveyor of direct address in drama, which is not quite the same thing as a monologue, since direct address specifically involves the speaker engaging with the audience as their co-conspirators. Spacey said that touring with Richard III around the world gave him a great view into how audiences respond to direct address, which he bears in mind when he does direct address on House Of Cards.

6. When You See Spacey Onstage, Don't Photograph Him

Spacey spoke of how - despite the "No Photography" rule in place during the tour - audience members would often use flash photography while the play was going on. Spacey explained that at first he responded by breaking character and telling the audience to knock it off, but his protests became more profanity-riddled as people's photography became more incessant. However, his fellow cast members eventually got him a green laser pointer, and from then on Spacey simply pointed the offending cast members out with his laser pointer whenever he saw photos being taken.

Like this? Check out Four Films About Theater At TFF 2014, a few of which still have tickets available.