The massively successful League of Legends gaming universe might seem foreign to cinephiles, but a closer look reveals that, for film music lovers specifically, it's more familiar than you may think. 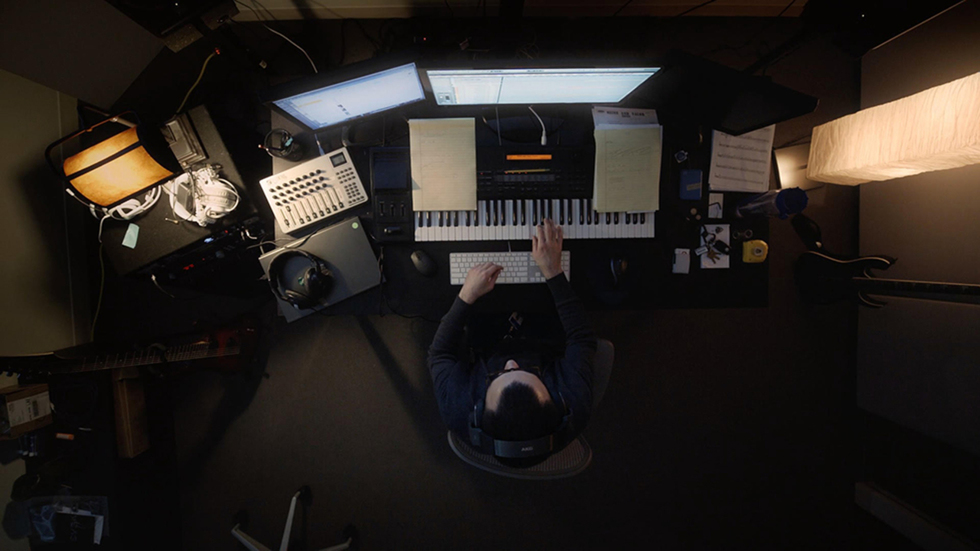 Disasterpeace's It Follows score makes it official: the gap between film music and video game music has been eliminated.

Fans of the enormous open-world gaming franchise League of Legends, however, know that such commonality between the two worlds is nothing new. At the Riot Games headquarters in Los Angeles, a small but largely talented five-man team has been orchestrating expansive and undeniably cinematic music for League of Legends for years now.

Full of action, battles, explosions, and otherworldly characters, League of Legends itself is massive, but the music is its own unique beast. The game's characters, better known as "champions," each receive their own elaborate backstories. Riot's in-house composers give birth to the music for these champions, utilizing the recording studios housed within the company's home-base's grandiose facilities to make audio magic. Sometimes they create electronically based tracks that call to mind old-school game music, but with a modern twist; other times, they go full-on John Williams with orchestral arrangements that rival what you'd hear in a Hollywood movie.

On Friday, November 13, Tribeca Games and Riot will team up for "The Craft and Creative of League of Legends," a one-day trip inside the game's one-of-a-kind universe with its designers, artists, composers, and in-house filmmakers on hand as the tour guides. One of the event's panels, "The Music of League of Legends," will be dedicated to League's audible side, including live performances from guest musicians.

Leading up to that panel, TribecaFilm.com caught up with Riot composers Alexander Temple, Jason Willey, and Edouard Brenneisen to discuss their approach to League of Legends musical grandiosity.

The Blurred Musical Lines Between Gaming and Cinema
"One of the advantages of composing for video games instead of movies is that, yes, League of Legends is a video game, but most of what we do as composers is actually used outside of the actual game. So we could be composing a song for the game, but we could also be composing a piece of music for a short video that exists outside of the game. Even though we're video game composers, League of Legends his such a massive world that we function as both game and kind of film composers. Champions have their own short films and world-building videos, and each of those needs original music. So it's the best of both worlds for us."

"Plus, the sheer breadth of the types of characters in our game also means that we have more opportunities to compose in many different styles, whereas certain IPs restrict composers to strictly orchestral or strictly electronic stuff. But our game allows for different genres and styles of music to exist in the same world." —Alexander Temple

"We're different from other game companies because League of Legends is constantly growing and evolving, we release a lot of content on a regular basis. From a music perspective, that means we have bounce around from one character to another very frequently, and we'll see quite quickly how our decisions on how to score against a certain character's abilities and storyline affect our players. Our players are passionate about what we do as composers, and we're always reading whatever they have to say about our work, to make sure that we honor their interests and thoughts. So it's very collaborative not only between the composers here but also, in a way, with the players."

"In general, the distinction between game music and film music has become a moot point in recent years. With the increased budgets, the technology, and how people use music within games, those lines are now virtually non-existent. The sky is pretty much the limit. But there are definitely things that gaming music has to do that film music doesn't have to do, and vice versa. We're not working with dialogue, for instance, so we don't need to compose music around anything like that, and we're working with champions and worlds more than story arcs, so our music is more about bringing life to specific things than creating tension or conveying a scene's mood." —Jason Willey

The Do's and Don't's of Champions' Theme Music
"The goal with our music is, how can we encapsulate everything about that champion, or most of everything about that champion, within a three-minute piece of music? At Riot, there are what we call 'foundations,' which are the backstories for environments of each one of our characters, so we have to rely on those for a lot of the music decisions we make. We also have to look at the specific champion's in-game abilities and physical attributes. If a champion uses brute force or if it is more agile, those characteristics will translate into our musical choices. We try to find very specific musical elements to help players identify a piece of music with a certain champion, where the player only has to hear a few notes to say, 'Oh, this is for that champion, without a doubt.'" —Jason Willey

"We always say that it's not just necessarily writing music for the champion, but also their larger worlds. A lot of our champions fall into certain factions within the larger League of Legends world, which I guess you can compare to different countries or civilizations. So when it comes time to compose music for a new champion, we have to go back and revisit how we scored the music for other champions in that new one's faction. We'll reuse specific instruments to help unite all of a faction's champions that way."

"What we do for champions isn't really comparable to how movie composers give franchises and certain recurring characters their own musical themes. We're not trying to write music that would sound like it's appropriate background music while you're playing the character. It's more about encapsulating the character as a whole. The thing is, the way League of Legends works, it wouldn't be good to give each champion a musical theme that players hear whenever that champion is on the screen. That's not how we work."

"If the game started having a mode where whenever two champions meet on screen the players hear their musical themes, it would be really bizarre and disjointed. You'd hear a really grungy rock track right up against a really beautiful piano track, but it would be chaotic and would take away from the individual pieces of music. But taken in isolation with the characters, the music works much better." —Alexander Temple

"For me personally when I'm playing League, there's so much going on, and there are so many distractions already within the game, that I don't want a bunch of different and different-sounding musical compositions to make the gaming experience even more difficult. If there were all kinds of big, epic music in the background the whole time, that would probably cause me to make even more gameplay errors than I already make. [Laughs.] There are some players who mute the in-game music and play with their own playlists, or without any music at all. Which goes back to why what we do is so unique, how we compose music mostly for out-of-game experiences." —Edouard Brenneisen

Fact: Great Music is Great Music Regardless of Its Medium
"There's one thing that has always been compelling to me about certain scores, whether for films or video games: I love it when the music works just as well in context as it does in isolation. There are certain movie scores you can listen to that work great within the film but then it's lackluster when you listen to it by itself. I've always aspired to create music that fulfills both of those roles, where it's appropriate for the League of Legends world it's been made for but also stands on its own outside of the gaming experience."

"Some of the most memorable gaming experiences in my life, going back to when I was a kid, are directly tied musical moments in the games. So if we're able to create a piece of music that someone can listen to 15 years from now and be transported back to their experiences playing League of Legends, that's all we can ask for, really. That's a big similarity between what we do and what film composers do—the best film scores are timeless and always make you think of their movie no matter when or where you hear them. The League of Legends music definitely has that same goal." —Alexander Temple

To buy tickets for "Tribeca Games Presents: The Craft and Creative of League of Legends," head to the event's official page.