How does a holiday dinner, let alone a regular meal, make it to the big screen? We talked to blockbuster food stylist Chris Oliver ('Little Fockers,' 'Water for Elephants,' 'Masters of Sex') about her favorite movie and TV food styling adventures. Vegan mango-and-tofu "eggs," anyone? 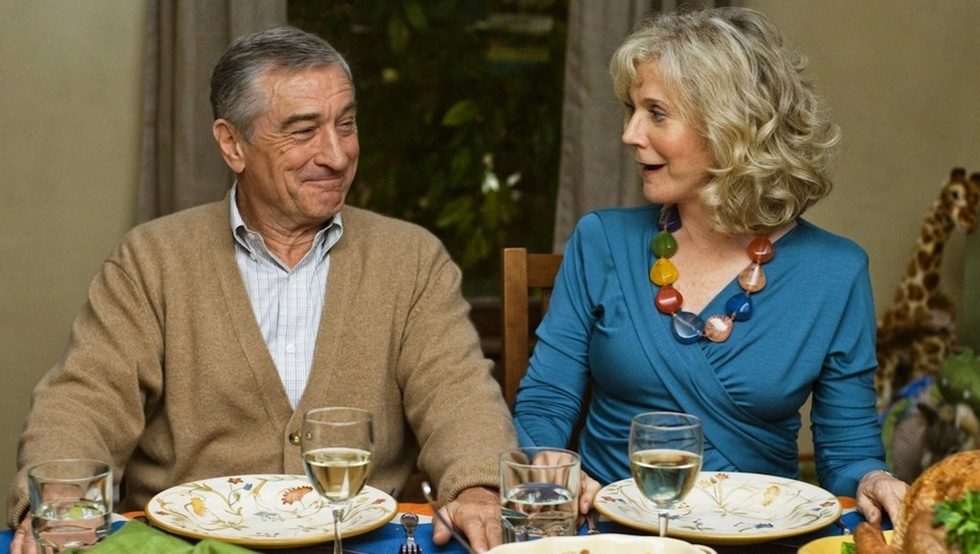 Chris Oliver is a food stylist to the stars. From Huntington Beach, CA, Oliver and her bi-coastal team have worked for over three decades on movie and TV sets grand and indie. From Seinfeld all through the '90s to Showtime’s Masters of Sex on TV now. Oliver has styled hundreds of films—Pirates of the Caribbean, The Rock, How Stella Got Her Groove Back and many she must be tight-lipped about. She spent months on the set of The Master, squeezing lemon juice into Joaquin Phoenix’s eyes for red effect. She grilled watermelon as steak for Barbra Streisand on the set of The Guilt Trip because there are only so many 72-ounce steaks one Academy Award-winning actress can shovel down for one five-minute scene. And she prepared eight turkeys in two hours for Ben Stiller and Robert De Niro on the set of Little Fockers. Listen and learn!

Tribeca: How did you get into food styling for, like, all of Hollywood?!

Chris Oliver: I started at culinary school in the 80s, worked in restaurants and then started a little catering company working on film sets. I was catering on a film and the producer came and said to me, 'can you make a plate of lamb chops?' Then the next day, he offered me a lot of money and I thought, ‘I’m going to have to change my career.’

Nowadays, every actor has their own requests. It’s ‘I’m a vegan, I can’t have meat but I’m supposed to be eating a steak.’

Chris Oliver: There were no real food stylists. Things really changed in the early '90s. By the time Seinfeld came on air, TV shows were doing so many things per 22-minute episode, it was impossible to keep up with. There was no way the prop guys could put out all that food; they weren’t chefs. So they had to call in home economics and we sort of created a new niche. Back in the day day, the reason they called them Spaghetti Westerns is because back in the '60s, the prop guys could always pull off a spaghetti dinner. You’ll notice, 90% of the meals that they’re eating is spaghetti . Nowadays, every actor has their own requests. It’s ‘I’m a vegan, I can’t have meat but I’m supposed to be eating a steak.’ ‘I’m supposed to be eating yogurt but I don’t eat yogurt.’ So, I have to create it out of something else.

Chris Oliver: Oh yes. On Masters of Sex, there’s a scene where Beau Bridges [as Barton Scully] is eating a fried egg. He’s a vegan—you gotta ask, why would they script a vegan to eat a fried egg but anyway, if it’s written, it has to be done. How do you make a vegan egg? If I told you... Molecular gastronomy. I can’t even say that but I can do it. It was mango and tofu. If you watch the scene, you don’t know the difference. Anything that vegans can’t eat, I can recreate.

On Boardwalk Empire, I had to do an edible arm that they have to throw and the alligator eats it in the scene.

Tribeca: What else have you made?

Chris Oliver: Hmm…I make edible mescal worms out of agar, a kelp protein that’s in a lot of Vietnamese desserts. It’s my new savior ingredient, my new glue. I used to use gelatin a lot as a binder but the vegans ... Gelatin has too weird of a smell anyway. On Boardwalk Empire, I had to do an edible arm that they have to throw and the alligator eats it in the scene. They are heavy, 50 pounds easily. I had to make a cast of it and make it so it’s throwable and wouldn't dissolve in the water.

Tribeca: Have you done any Thanksgiving scenes that we’ll see coming up?

Every show does Thanksgiving. Last year, I did over 100 turkeys. For one Thanksgiving scene, I need 8-24 turkeys because every time they carve a turkey, they need a new one. Turkeys are tricky because you really don't want to kill the actors. First it’s cooked, then it’s sitting around and might get cold, then it goes under the lights and gets super hot again. You have to protect everything. You always want to be one worse case scenario step ahead of them.

Tribeca: Which scene did you do this year?

It’s for a film that’s not released yet—we were shooting turkeys out the window with an air gun. The girlfriend gets pissed and flings the turkey out the window. All of the turkeys had to be cooked of course because they needed to survive the fall and not smash on the bottom. When I did Little Fockers, I had three hours to cook eight whole turkeys—they wanted 25, I said I can do eight—for the Christmas scene.I had my truck on the set, it’s 6 am and they came and told me we’re going to shoot the scene before lunch. Luckily I had the turkeys. Luckily there were caterers there from another show so we had a whole production going—they steamed them in their truck, I browned them in another truck. I had to stuff the turkeys... It was the scene where Ben Stiller carves [with the Irish hunting knife] and he cuts his finger and there’s all the blood. [It splatters onto Robert De Niro and the family when a mouse runs across the table.] They had to rig the turkey for Ben. Wow, so much production. You have to know how to skin a cat, which is disgusting, I would never do that. But there is more than one way, is the point.

When I worked on Water For Elephants, that was amazing. There’a scene where Robert Pattinson is feeding a tiger and it sort of bites his hand. I had to design a bucket of guts and send it to special effects and they made a plastic version of the guts. But when they got the tiger to set, the tiger was having none of that—he knew it was plastic. So I come in with the real buckets of guts. There were 20 buckets of guts all lined up and they bring the tiger in on a forklift. I’m covered in guts and standing 30 feet away. Have you ever heard a tiger roar in your face? He’s roaring for me and all the guts and I’m like, ‘get me out of here.’ It was amazing. Very cool.

Tribeca: I bet the tiger was happy, though. He got to eat all the leftovers?

Chris Oliver: It was pretty fun, very cool to be that close to a tiger.

Tribeca: Do you deal with a lot of waste?

Chris Oliver: There is a lot of waste but these days, I try to use it actually. So there’s no waste. I have gotten into pickling and jarring. And now I’m infusing vodka with all kinds of different stuff. All my people are guinea pigs; I just give it away. I’m also making kahlua, which is vodka and coffee based, then I infuse it with different things. I’m working on a peppermint, chocolate kahlua. And a marshmallow and chocolate. It will take three months for them to come out. Everyone on set loves me!