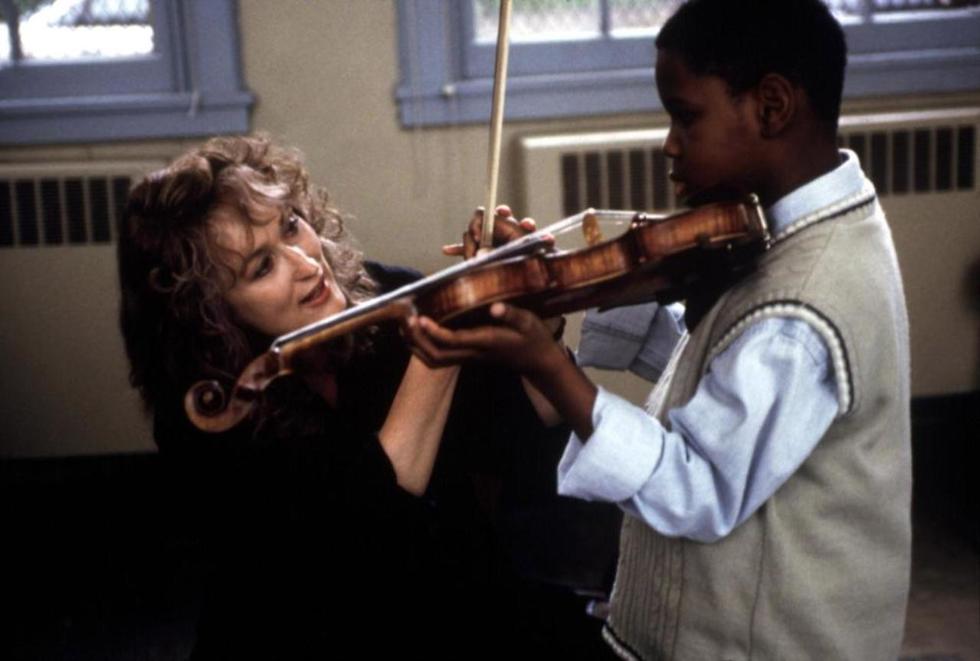 It’s the mere suddenness of Wes Craven’s passing this Sunday that has thrown cinephiles for a loop. The tributes and remembrances continue to pile in at a rapid pace, many of them lovely, comprehensive, and moving salutes to a man whose cinematic visions scarred and stunned generations of moviegoers and whose passing no horror lover could have possibly been prepared for. But there’s an irksome pattern in many of these pieces that’s seriously beginning to grate, and that’s the altogether diminished treatment of that curious anomaly in Craven’s filmography: 1999’s Meryl Streep-starrer Music of the Heart.

Based on the 1995 Oscar-nominated documentary Small Wonders, Music of the Heart tells the story of real-life violinist Roberta Guaspari (Streep), who co-founded Opus 118, a strings program that provides musical instruction to young Harlem students. The film traces Guaspari’s decades-long transformation from abandoned Navy wife to underdog violin teacher in an East Harlem public school to a passionate and unyielding advocate of city-wide music education, whose famed program is still running to this day.

Everyone who has come across Music of the Heart during both its initial release and the years since has had more or less the same question: “Wes Craven directed this?” And it’s a fair question. Music of the Heart is the film that plenty of Craven die-hards probably have no idea he directed, but it’s also the one that Meryl completists always forget she was nominated for. Despite its place in Academy history, Music received a muted critical reception and pretty much bombed at the box office, even in spite of its Oscar-conscious late October release. And, indeed, without Meryl’s esteemed involvement, it’s hard to imagine Music remaining even remotely relevant within even the most generous of film circles. It’s no wonder, then, that in his Entertainment Weekly testimonial, Chris Nashawaty treats Music as a relative footnote, saving it for the end of the article and labeling it an “earnest drama” before deeming that, compared to all the Screams and Nightmares that Craven built his career on, “Treacly melodrama wasn’t his calling.”

I’m sure many will be eagerly re-screening Craven’s horror highlights this week, but when I first heard of Craven’s passing, my initial instinct was to revisit Music of the Heart, a film I’ve already seen twice — which is definitely two times more than the average viewer — because I didn’t choose Meryl fandom, Meryl fandom chose me. I was eager to view it again for Streep, but also interested in seeing if my early fondness for the film (currently streaming on Netflix) held up underneath the considerably lesser light it has been cast in as of late. So, in light of Craven’s death and more than fifteen years after its tepid debut, how does Music hold up?

To be fair, it’s no barnburner of originality, but within a film genre (i.e. the “inspirational melodrama”) that continually gets such a bad rep because it’s so rarely done right if done at all anymore, Music is — actually — kind of a marvel. It’s genuinely surprising that Craven, who admittedly always saw his horror output as a means to the more prestigious end that the Miramax-backed Music seemed to signal, would be attracted to the type of true, motivational story that seems to have been developed in obvious anticipation of Oscar nomination morning. But it’s even more surprising that Craven could make this story so delightfully nuanced on its own relaxed terms.

Sure, it’s still the type of movie where Harlem is introduced to us with a blast of car horns and rap music, as a conservatively-dressed Streep sits in the back of a taxi that nearly strikes two jay-walking black youths. But unlike, say, The Blind Side, the film’s depiction of a predominantly black neighborhood doesn’t end there. Whereas The Blind Side shamelessly painted its briefly-glimpsed Memphis housing project as a dank, drug-infested den overcrowded with corrupting thugs and welfare queens, the Harlem of Music looks, sounds, and feels like a local, lived-in multicultural community that is changed but not, you know, saved by the audacious efforts of a persevering white person. Music honors Guaspari’s truly distinguished achievements without belaboring them in that horrific Blind Side way of ennobling the Heroically Stoic White Lady by using each scene to teach a moth-eaten moral about love and family or rendering everyone else on screen (particularly persons of color) as virtually characterless. Even when it’s narrowly skirting over-sentimentality and uncomfortably dealing with subplots involving gang violence and familial abuse, Craven and screenwriter Pamela Gray manage to avert the dubious fate that has befallen many an inner-city narrative before and since Music by making Meryl’s Roberta into a helpful and reassuring presence who is nonetheless troubled by what’s happening to the kids she has grown to care for, but who is by no means their white-winged savior.

And speaking of Meryl, Music of the Heart contains one of this legend’s most fantastically low-key performances that’s chock full of all those Marvelous Meryl Moments where she seems to be acting five or six feelings at a time with all the vivid emotional translucency that is her storied stock-in-trade. (She also learned to play violin for the role and, unsurprisingly, plays it expertly, and in Carnegie Hall no less.) Streep has terrifically specific chemistry with everyone on screen, including Angela Bassett as a toughened alternative school principal, Cloris Leachman as her mother, Aidan Quinn and Jay O. Sanders as respective suitors, as well as a teacher-cum-confidant played by Gloria Estefan, who performed the film’s über-schmaltzy, Oscar-nominated title track with N*SYNC. But it’s the performers playing Streep's young pupils, as well as the four actors (including Kieran Culkin and The Knick’s pint-sized Michael Angarano) who appear as her sons across the film’s ten-year span, who really elicit the most winningly spontaneous reactions of Streep’s touching turn. They keep Meryl from falling into any of her usual cadences or settling into her surroundings too comfortably and, in turn, the classroom scenes function as funny and fleet depictions of the sort of unpredictable public school learning experience that is so rarely evoked in mainstream moviemaking. True, I doubt this is anyone’s favorite Meryl and there was no way she came close to that Oscar, what with Boys Don’t Cry winner Hilary Swank giving one of the greatest performances of all time that same year. But for what it is, it’s still pretty special and, like the film it features in so prominently, fully undeserving of its regrettably “minor” reputation, which frankly smacks of some musty, anti-melodrama sexism. I highly doubt Music would be described as "earnest" or "treacly" if a male teacher was at its center.

I’m still amazed that the man who spent his five-decade career scaring the shit out of us came up with this gentle and comparably level gem of deeply-felt characterization that’s uplifting without being Uplifting, as too many of these movies frequently are. It’s clear that the film’s failure to ignite critics and audiences deterred Craven, who went on to direct the third Scream movie the following year, but, truthfully, he has nothing to be ashamed of. Precious few films pay this much strenuously invested attention to the professional, personal, and romantic pursuits of a fully-dimensional female protagonist, and Craven deserves immense respect for so beautifully respecting Roberta's daring and mastery while also respecting her marital grief, her occasional prickliness, and her more-than-occasional pushiness. With the invaluable aid of Streep's winning performance and Gray's humane writing, Craven creates a remarkably real woman to stand at the tender heart of this story.

Music of the Heart will forever remain the Craven film that Last House on the Left fans are sure to turn off in a mere matter of seconds. But I prefer to think of it as Craven’s greatest risk: an uneven and at times saccharine risk, for sure, but one that still yields cinematic dividends that are stirring in their simplicity and sweetness but never slight or superficial. If that’s not the mark of a true cinematic icon then I’m not sure what is.