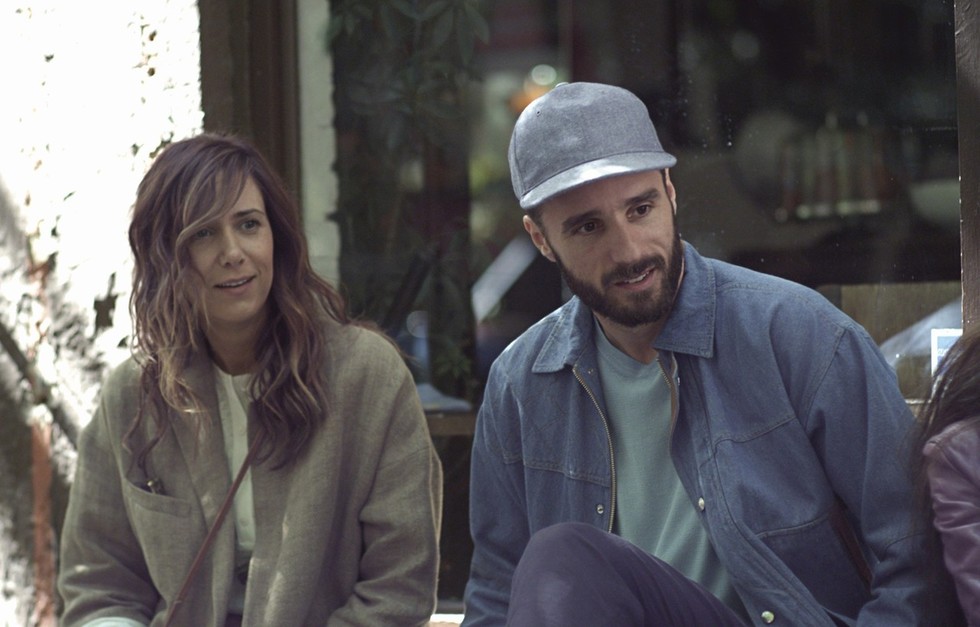 Don't call actor/director Sebástian Silva's new film Nasty Baby a gay movie. The filmmaker, who happens to be gay and happens to be from Chile, would also prefer not to be simply labeled as a "gay filmmaker" or a "Latino filmmaker." He and his movie are much more than that.

It's evident in Nasty Baby that Silva wants to pull the rug out from under his audience and turn what many people would consider a film about a homosexual couple (Silva and Tunde Adebimpe) trying to conceive a baby with their best friend (Kristen Wiig) into something completely different. He wants viewers to forget they're watching a movie with gay characters and focus first on the fact that all of the characters are flawed. The Berlin International Film Festival took notice this year when it honored Silva with the Teddy Award, Berlin's prize for the best queer film; the accolade's presentation included a statement that said Nasty Baby "symbolizes major divides that cut across the LGBT spectrum and across society."

TribecaFilm.com caught up with Silva to discuss the film, why he thinks the sexual preferences of his characters are unimportant, and how the industry needs to start normalizing the gay lifestyle.

Heads up: This interview contains spoilers.

I'm a little surprised this is your first lead role in a film. You're a pretty good actor.
[Laughs.] That's not acting. That was just me in front of a camera. I don't think I'm an actor. The thing I was truly scared of as a performer is the scene where I had to kill that man. I was like, "How the fuck am I going to act that out?" I had no reference. I’ve never killed anybody. I have no friends who have killed anybody. I thought people were just going to have to deal with the way I ended up reacting after doing it. Other than that one scene, I felt like I was just being myself among friends.

The film's title,
[Laughs.] I fucking love that question, man. I don't go to galleries so much. When it comes to performance art or video art, I'm usually very unsatisfied and confused. I never know what to make of them. I'm a dumb audience for art. I like to be amused and entertained and moved, but when I need to make too much effort or read about someone’s cultural background to understand I just get lazy. In the case of "Nasty Baby," if I go into a gallery and see grown-ups portraying babies, I'd probably find it at least amusing, but I wouldn't consider it a piece of art.

The cast is very diverse. Was that a conscious decision?
You know, it was not necessarily a conscious decision. It wasn't like a U.N. decision. The fact that there is a black character involved in the killing of another black character keeps that murder away from race issues. It makes the murder a fucked-up sort of crime that is beyond race. I was trying to escape that cliché, common ground argument.

Do you think films dealing with LGBT issues or characters are starting to become more mainstream now that the societal landscape has changed and has become more accepting of the lifestyle? Are we starting to see more movies about gay issues or is it still a niche market?
I definitely feel that LGBT films are still a niche genre. I hope they stay that way. I know that sounds awful. I don't know who is in charge of defining those kinds of things. Why is this movie an LGBT movie just because there is a gay couple? There are also black characters in this movie, so is it a black film? Of course it's not. I personally feel that it’s unfair to minorities that their participation in a movie creates a classification like, "Oh, that's a queer movie because there just so happens to be a gay couple in it." When you make a movie with a straight couple, it isn't a straight movie, is it?

So you don’t feel like defining a movie as an LGBT movie necessarily helps the cause?
I don't know if it serves the community, to be honest. I have mixed feelings about that. You're boxing yourself in such a small niche. When you go to a DVD store and you have all these cross sections of films, sometimes there is a gay section. I hope Nasty Baby never ends up in that section. No body goes to that section. Who wants to watch a movie because they are classified by the sexual desire of the characters? That is so strange to me. Why would someone want to watch a movie just because all the male characters like penis? How is that something appealing?

What about you as a gay Latino filmmaker? I'm assuming you're put into the same kind of categories, too. How do you feel when people call you a gay filmmaker or a Latino filmmaker?
I'm going to sound like an asshole right now, but I reject it sometimes. I've rejected interviews for [LGBT] magazines before. Again, I don't know if it’s serving the community. I don't even like calling gay people the "community." We should be normalizing homosexuality and normalizing blackness in a way that you can't pinpoint so easily. Why do they want to define me as a gay director? Is the fact that I like dick so important to everyone that they need to say that before anything else? Is the fact that I was born in South America so important to everyone that they need to say that before anything else? There are aspects of myself that are way more articulate and make me way more of who I am than being a homosexual who was born in Latin America. Those things were not my decision, so why are they such a big part of my personality? There are parts of my personality that I find way more particular and interesting than just being a homosexual.

You mentioned LGBT magazines. There are plenty of outlets out there in the media that are geared toward gay content.
I have to say, homosexuals should take some blame by creating those homosexual outlets just for homosexuals. It becomes confusing.

Nasty Baby has also won awards at different LGBT film festivals that cater only to LGBT films.
Yes, we won at OutFest and as a queer movie in Berlin. [Nasty Baby] is perceived as a "gay movie" or a movie with a gay concept, but I actually like that this movie won those awards because at the end of the film you truly forget these characters are gay. It becomes secondary to them as characters.

Is that why the film's third act is so different from everything else? Was it your intention to force people to see the movie as more than a film with gay characters?
When I write about a homosexual person, I truly forget they are homosexual. I'm not constantly thinking, "Oh, he likes dick, dick, dick." [Laughs.] I need my characters to be more than that. Once you make these characters become murderers, the gay aspect is completely gone. That act proves how secondary it is to be homosexual. I think that's something I discovered while watching the movie with audiences. It's not a gay film in any way. The gayness is irrelevant to me.

There are two movies coming out this fall with gay characters that are getting some major awards buzz: Carol and The Danish Girl. How do you feel about these films getting more attention from the industry than most gay films?
I don't know these movies, but unless the story is very interesting, and I'm sure they could be very interesting, but I don't want to hear the same story over and over again. It's the same thing with the so-called "black movies." I find those things very one note like when black people play slaves or criminals. It's sort of a crime to call people "black people" or "homosexual people" before you call them "people." They are people before they are the color of their skin or before they are their sexual preference. Again, I don't know the context of the films you mentioned, but to have a movie about someone’s conflict in their sexuality sounds a little boring to me.

What about Latino films that deal with border issues or the like? There are quite a few of those.
Yeah, exactly, I feel the same way. I feel bored. I don't need to be told it's hard to be homosexual or Latino. I don't think black people need to be told it's hard to be black. I feel like we already know that. It's getting kind of redundant. I believe the way to be progressive about these issues is to normalize it. When someone says "gay movie" or "black movie," I start to yawn.

I read about how the Toronto International Film Festival's officials there wrote to you and said they would accept Nasty Baby into their festival lineup if you changed the ending. Now that I know how passionate you are about how the film ends, how did you feel about their request?
I try not to be insensitive when I talk about Toronto in interviews. They told me the movie would work for them if it didn’t have that ending. I was amused with that. For me this movie means nothing without that ending. It's all about the moral confusion that last act produces and how you make your audience be forced to judge people they've already invested time in. I was just very shocked they said that.

Nasty Baby is currently playing in NYC at the IFC Center. Get showtimes and ticket info here.