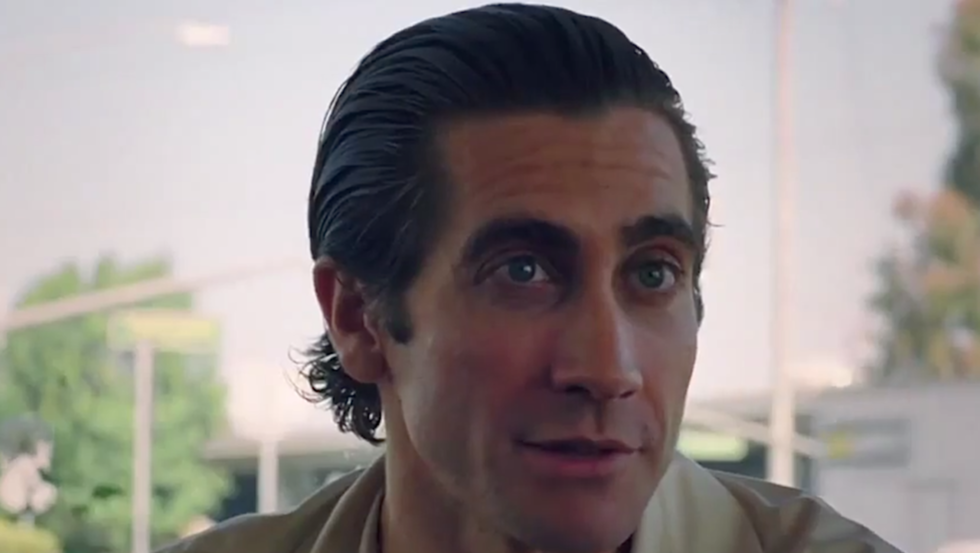 This Week's Trailer: A look at Nightcrawler, an upcoming thriller starring Jake Gyllenhaal as Lou, a social misfit who becomes a freelance crime journalist… and maybe starts committing crimes so that he can record them. (In theaters Oct. 31)

This Week's Tune: Jetta's cover of "I'd Love to Change the World," which was a minor hit for the British band Ten Years After back in 1971.

How Literal Is It? Nightcrawler seems like Network for an even darker age, with Rene Russo's TV news producer telling Lou that she wants him to think of her programming as a woman running screaming down the street with her throat cut. So if Lou wants to get paid, then he'd better deliver some gruesome footage and he'd better deliver it first. That's a breathtakingly cynical perspective on how modern media operates, and it's only bolstered by Gyllenhaal's unsettling performance. After about one second of watching his crazy eyes, I believed he was just the kind of wackjob who could convince himself that killing a person and filming it for TV was the correct moral choice.

With that in mind, "I'd Love to Change the World" is a spot-on choice. We only hear the line "I'd love to change the world, but I don't know what to do," but that's enough to underscore the trailer's moral ambiguity. And if you dig deeper into the lyrics, where the speaker bemoans the presence of "freaks and hairies" and "dykes and fairies" and says he'll leave changing the world to someone else, then you realize the song is a bitter satire of hateful people who complain about things without trying to change them. And doesn't that sound like the audience that Lou is trying to reach?

How Emotional Is It? Cleverly, the song builds very slowly throughout the trailer. For a large swath in the middle, in fact, there's no music at all. Just sound effects that get more and more intense as Lou gets more and more committed to his violent new profession. And then at the very end, when he walks into a murder victim's house with his camera on, we hear Jetta singing. That means the line "I'd love to change world" illustrates how Lou makes the world worse. It's chilling.

Will We Associate It With This Movie? Not likely. The trailer for Dawn of the Planet of the Apes used an instrumental version of this exact cover, and the original version is in the trailer for Fahrenheit 9/11.

Overall Trailer Tune Effectiveness: "I'd Love to Change the World" may be a standard trailer song, but Nightcrawler employs it well.