Paul Pope talks to us about co-directing his first short film, space westerns and how the filmmaking process doesn’t stop after you turn off the cameras. 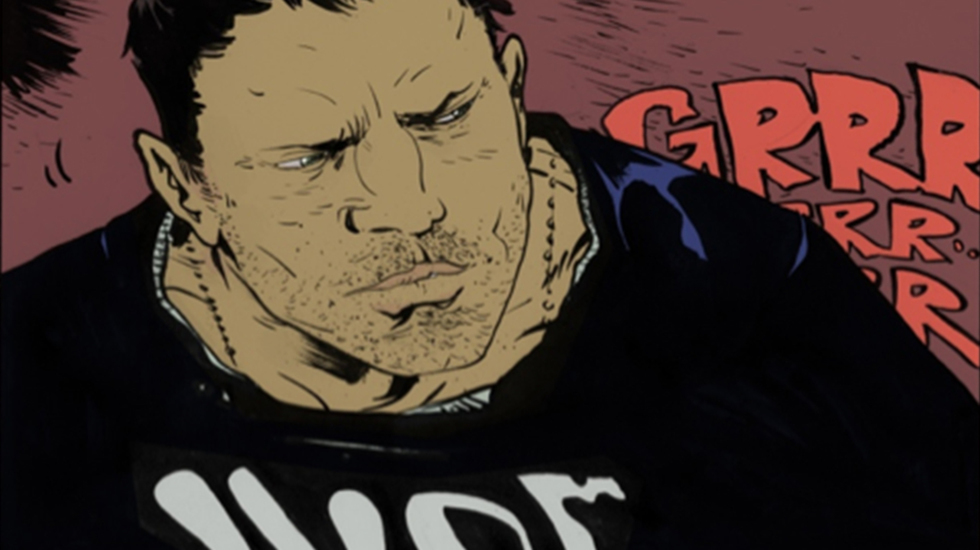 It was only a matter of time before Paul Pope stepped behind the camera. Author of the acclaimed Batman:Year 100 mini-series, Pope has long been an established presence in the comic world and has dabbled frequently in other artistic realms like film and fashion. Thanks to a partnership between Tribeca Digital Studios and Sony, Pope and co-writer/director Sridhar Reddy were able to make Pope’s first short film, 7X6X2, with exclusive access to the Sony F55 camera prototype.

7X6X2 tells the story of a lone serviceman who is sent to a distant planet to repair a terraforming robot located in a barren desert. When his position is threatened by 7 fearsome rock creatures, the serviceman must protect a young surveyor who is unaware of the danger that lurks in the darkness.

We got to chat with Pope about directing actors for the first time, composing the score for the film with musician Ben Rubin, and creating a graphic novella from 7X6X2.

Tribeca: You’re already very established in the world of visual arts and comics. What drew you to filmmaking?

Paul Pope: This is the first project I’ve co-directed, but I’ve worked on a number of different projects with Paramount including Kavalier and Clay, the new Dune reboot, and my own Battling Boy. I’m friends with a bunch of film directors, and I find their work fascinating. Film is an art form that I’ve been interested in exploring.

We tried to look at the film as the last ten minutes of a science fiction movie you’ve never seen.

Tribeca: You met your 7X6X2 co-director Sridhar Reddy when he approached you about adapting your comic, The One-Trick Rip-Off, into a movie. Why did you choose him to be your collaborator on this project?

PP: I’ve worked in film previously and was actually offered a co-director position on a pretty major project. If Kavalier and Clay had happened in 2006, I would have worked directly with Stephen Daldry.

Tribeca: Wow. What a project to cut your teeth on!

PP: [laughs] Yeah. It was really intimidating because it would have been such a humungous production. With 7X6X2, Sridhar and I had already been working together on The One-Trick Rip-Off, which hopefully will go into the production soon and be ready for release next year.

I got a call from Gary Krieg and Matt Spangler at Tribeca, and we started kicking around potential ideas for a short film. I had this idea for a space Western, and since Gary is a big fan of Westerns, that’s the idea that stuck. Sridhar and I work really well together and were able to take that initial idea and run with it. He was the obvious choice for a collaborator on the project.

Tribeca:  Can you discuss how you and Sridhar divided your co-director duties?

PP: Since we had the opportunity to use the Sony F55 camera prototype, one of the things we established was that Sridhar would work with the first and second unit cameras along with our cinematographer Jesse Green and I would be working mainly with the actors, costume design and art direction. By the time 7X6X2 came along, Sridhar was already working on his third or fourth feature, not to mention countless commercials, pilots and music videos, so he was just like a kid in a candy store with the Sony F55 camera prototype.

We work in a way similar to Robert Rodriguez and Frank Miller on Sin City. After all the casting and costume design was done, I would sit at the monitor with Sridhar and the team, and we would go over shot and lighting suggestions and make the choices together. It was a collaborative partnership over all.

Tribeca: How long was the production period for 7X6X2?

PP: We had only three days to shoot the movie in the Fall. It was a whirlwind because we had to have it ready by Thanksgiving to screen for Sony. We got the green light in early October and immediately flew to Los Angeles to get started on the production. I think we put in 18 hours a day for 10 days straight. We had about 2 weeks to prep. Plus, those 3 days on set were mostly spent in the desert shooting at night. It was pretty grueling.

The 7X6X2 graphic novella will be based on the first draft of the script for the short film.

Tribeca: Can you talk about working with the actors on set? Did any one of them stand out?

PP: Though everyone was great to work with, the most seasoned actor we had on set was Paradox Pollack. He’s a motion choreographer for Marvel and he also played the head vampire in I Am Legend. Paradox is a talented dancer who is really interested in the filmmaking process. He and his dance troupe played the rock people, and he provided elaborate choreography for the project.

We didn’t have a much time to put the costumes together, and that was stressful because we knew we had to have a couple of close ups to amplify the intensity of the monsters and make them believable. [laughs]. Paradox really helped us take it to the next level with his movement direction.

Tribeca: What’s the most surprising thing you learned in the post-production process?

PP: Our editor was this great guy named Stephane Dumonceau. He loves science fiction and French comics.  I should tell you that France is one of my biggest markets. The most surprising thing for me to learn was just how much is done after the shooting is complete. I just little experience with color correction or sound design or lighting effects before 7X6X2. That’s no even to mention all the special effects!

I remember screening a rough cut and everyone was concerned. It just looked like guys in gorilla suits [laughs] We assured everyone that once the sound team came onboard and all the effects were in place everyone would be happy. By the time we screened the final cut, everyone had done a complete 180. We’re all so happy with the way it turned out.

Tribeca: And you co-scored the film with Ben Rubin, right?

PP: Yeah, he’s a great musician and can just play anything. He composed the music you hear over the end credits. 7X6X2 was the perfect opportunity for us to write and record together since I also play guitar. We had about two weeks in NYC to rehearse together before I had to fly to LA. We did the score in just two overnight sessions in Brooklyn. We made the record in D minor, which Ben calls the “fattest chord.” It was important to us to get the feel of a spaghetti western, but we didn’t use the typical instruments like harmonicas.

We work in a way similar to Robert Rodriguez and Frank Miller on Sin City.

Tribeca: The film is a unique audio and visual experience. I also loved the inclusion of the comic panels under the end credits.

Tribeca: It must be really wild to adapt your work for another artistic medium.

PP: It is. It’s kind of similar to what Battling Boy is going to be like.  The first part of Battling Boy was just published with the film rights already sold to Brad Pitt’s production company, Plan B, and Paramount. So at this point, I’m pretty familiar with developing an original script and story bible from my graphic novels. I haven’t been able to complete the graphic novella of 7X6X2 because I’ve been knee deep in Battling Boy. The 7X6X2 graphic novella will be based on the first draft of the script for the short film. It’s almost the reverse process.

Tribeca: Can you talk about the script writing process?

PP: Jane Rosenthal, Matt and especially Gary were really helpful. Gary was on set with us the whole time and was our tireless champion. We took the script from what would essentially be a 70 page graphic novel and cut some scenes that were redundant to streamline the story. Sridhar and I pitched ideas back and forth and did some revisions. Our seventh draft finally got the green light. Since I was working on the costumes, music composition and casting, Sridhar storyboarded the script, which was a product of both of our collaborative efforts.

We tried to look at the film as the last ten minutes of a science fiction movie you’ve never seen.