We had a conversation with Prune Nourry, mixed media artist and contributor to this year's Artist's Awards Program, which will be on view at Spring Studios during the Festival. 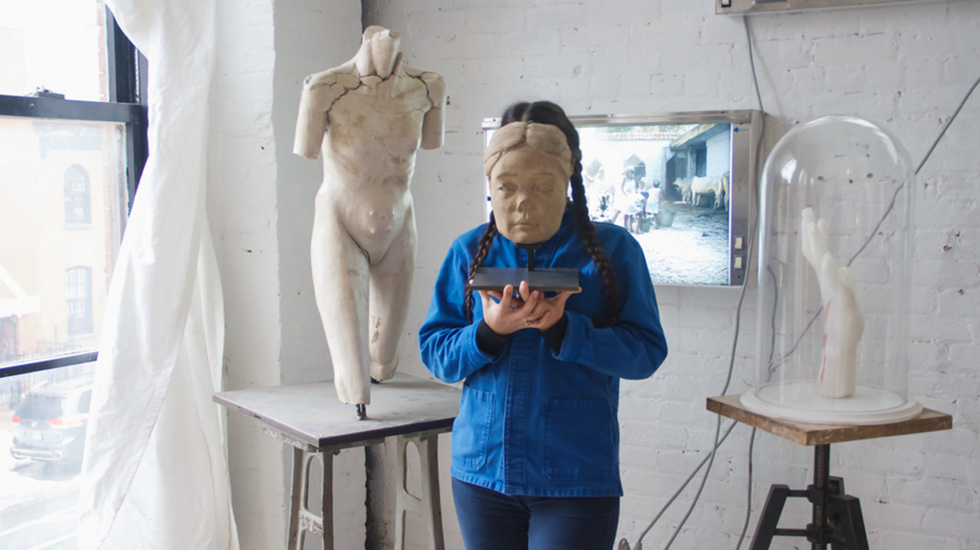 All photos by Daniel Mondragon. Visit his instagram for more.

Prune Nourry's anthropological artwork had previously taken her to India with Holy Daughters, in which Nourry installed bronze scultpures of young, bovine girls in public places for consideration. This time, Nourry goes to China to create 116 Terracotta Daughters, an interpretation of the 8,000 terracotta soldiers that were discovered in an agricultural town in the Shaanxi province in China. We recently had a chance to chat with Nourry, who contributed her work to this year's Festival Artist Awards Program.

"At first you do art for you, and it has to come out from your belly, your belief, your inside. Instead of the way some artists share their own lives to encourage people to see themselves inside the story of the artist, I prefer to do research. I work a bit like a scientist, more objectively, to digest all of the information and create a project that will make me and my audience think. I don’t give answers, but I raise questions to myself and to the others at the same time."

"Clay is my favorite medium. So many origin myths in modern religions are centered on the idea that the human is made out of clay before they were given life. As an artist, you have to give life to your sculpture, a life apart from you because at some point it won’t be yours. It needs to have its own soul."

"I see my projects like trees. There is a phase that is the roots - research. The trunk is the main, ephemeral project. The branches are all the artworks that are inspired by my project. These projects are inspired by the philosophy of balance - the yin, the yang - coming from taoism. But the reality is that there is a real disequilibrium - like gender imbalance and the pollution of natural ecosystems."

"I use acupuncture needles everywhere on the sculpture, not in the correct places so it feels imbalanced, strange."

"When my work was exhibited in Mexico at the Diego Rivera Museum, I noticed that they housed artifacts, some of which are 2k years old. I was really looking forward to seeing how Mexicans would welcome the project because we have this issue of disappeared women. The practice of gender selection in China created my terracotta daughters, which refers to a large number of missing bodies. So you have totally different ideas that meet somewhere. They were looking at a project involving Chinese girls with Chinese faces - yet they are seeing Mexican girls in it."

"The piece I donated to the Annual Artists Awards Program makes a lot of sense for Tribeca. That picture was a moment of action, a frozen image of a movement where we pushed a sculpture back into the river. It took months of work to build that sculpture but this motion had it disappearing. The image is the only witness left of something that exists, but has disappeared."

Starting April 13 through the 25th, New Yorkers and Festivalgoers will be able to walk through our TFF 2015 Artist Awards Gallery at Spring Studios where original works from world renowned artists will be on display prior to being presented to Tribeca Film Festival’s award winners. How cool is that? This year, we’ve assembled an eclectic and brilliant group of artists, including Daniel Arsham, Prune Nourry and Piers Secunda, whose cutting-edge works reflect the innovation that Tribeca cultivates.

With our new Festival space at Spring Studios, the Tribeca Film Festival is well on its way to becoming the most interactive film festival in the country. With our Spring Pass and Spring Day Pass, attendees will be able to enjoy the many interactive and collaborative activities and events hosted by this creative hub with their invited guests. Click here for more information on how to purchase your passes.