Get it straight. ‘Raze’ is not some version of a female ‘Fight Club.’ This hard-hitting exploration of how far women will go to save themselves and their loved ones packs quite a punch (no pun intended). Director Josh Waller talks about the casting of Zoe Bell and how the project came to be. 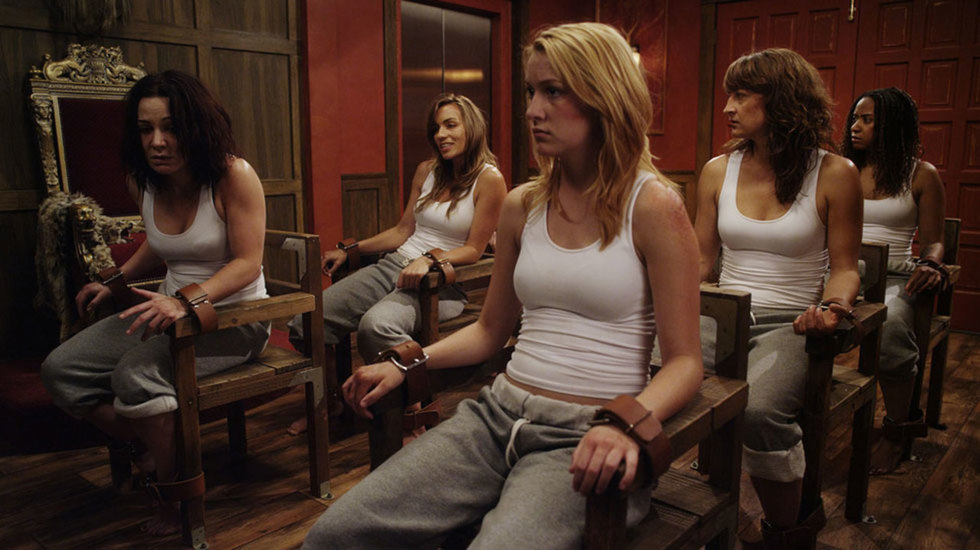 Tribeca: Tell us a little about Raze. What inspired you to tell this story?

Josh Waller: Kenny Gage, one of our producing partners, had written a little 7-8 page script for a short film called Raze. It was about women who fight other women in a pit, but it didn’t really go into any of the backstory. He asked me if I wanted to be a part of producing it. Initially directing the film was not my role. I agreed to take the script home and tell him what I thought. That night, we started a flurry of brainstorming, and the story fell together really quickly.

We decided to make the fights as realistic as possible, and I suggested that we call Zoe Bell. The same thing happened with Rachel Nichols. We thought that it would be great if Rachel would be Zoe’s opponent, and I just called Rachel. Luckily, the casting just came together like magic.

We did not want to make an exploitation film that involved things like women in cells fighting each other.We decided to take women that fight each other very, very seriously. This movie is not Fight Club. We approach these characters as professional fighters who just happen to be women, and to me that’s more engaging. That’s what I find really exciting.

Tribeca: The character that Zoe Bell plays, Sabrina, is really interesting because she’s different from most of the other fighters. Where they are fighting for loved ones that they know and see every day, she’s fighting to save the daughter she never knew. Can you talk about your collaborative process with Zoe on the character? Why her for Sabrina?

JW: First of all, I wanted Rachel and Zoe because I thought they both bring  strength to their roles. I also think that they’ve been underutilized as actors. Zoe is an amazing star who has really grown as an actor. We’ve known each other personally for several years, and I knew that there was still a part of her talent that was somewhat untapped. I felt the same about Rachel. They both have been cast as “the hot girl” when they are so much more than that.

For Zoe, it was more about tapping the badass, gritty, stuntwoman-side of her. I kept telling her that I wanted to go for the Clint Eastwood feel, the man with no name trope. At the beginning, she almost rejects that fact that she even has a daughter. While the child might be her blood, she is not her child. Over the course of the film, her hard exterior breaks down, and westart to see more and more of her emotions.She becomes more in tune with her maternal instincts as she’s killing people. It’s totally screwed up.

She spent a lot of time with her coach and just on her own, writing her own little journal as the character. I didn’t want to intervene too much with her process because each actor has their own process. Hers was seamless and painless as well.

Tribeca: Sherilyn Fenn, Doug Jones, and Bruce Thomas ended up as figureheads in the shadowy organization that runs the fights. At one point did you intend to provide more details about their goals and aims, or did you make the conscious choice to leave the audience wanting more?

JW: I made the conscious choice to leave people wanting more. We wanted this to be a film in which a large part of the story is driven through action and not dialogue. The office scene where you first get to know Joseph and Elizabeth actually was another two and a half minutes long with much more dialogue. We surgically removed those two and a half minutes as a conscious choice.

Kenny and I have written synopses for Raze two, three, four times, so the story is much larger than what is on the screen. We want to, hopefully, get people hooked and tell them more later.

I didn’t treat any of these sequences like a popcorn movie sequence.

Tribeca: Raze has to contain one of the most satisfying climaxes I’ve seen since Dogville. It’s so cathartic when you see Zoe’s character finally get the upper-hand on the bad guys followed by one god-smack of an ending that I thought was really well-executed. How did you find that right tone when you were shooting?

You’re talking about women that are abducted and have to kill each other to protect their loved ones. That’s not a light subject, and it shouldn’t be treated as such. So it wasn’t as much my keeping the tone throughout the shooting, but more like my saying, “Take it seriously.” Sometimes, people can miss the mark. It’s kind of like with comedy.You’re never supposed to play the comedy. You take it seriously and the seriousness of the situation is what makes it funny. It’s the same thing with action or horror.

Tribea: One of the tag lines I’ve seen floating around for the movie is “Fight or Die”. Appropriately, the fight sequences are really brutal and really realistic. Can you talk about some of the challenges of shooting those sequences? Did your special effects team encounter any difficulties?

So it had to do a lot with scheduling and also be very shrewd about which fights we were going to devote more time to than others. There were so many times that we went long on the schedule; people were pushing long, long hours on a daily basis and depleting their energy. The whole shoot was relatively difficult. It was the most ambitious thing that I’ve ever done.

Tribeca: Especially given the low budget, the labyrinth of the dungeons in Raze were really impressive.  How did you work with the set-designer and the cinematographer to achieve the overall look of the film?

JW: Kenny and I threw a lot of stuff back and forth. We didn’t want the set to look like a prison, first of all. We were thinking more about a concrete bunker. We didn’t have any money. In an ideal world, we would have built out our entire set, but that’s so expensive. The entire production design budget was a little more than 30 thousand dollars, that’s almost nothing.

One night, as I was trying to figure out how we could do this, my little brother came over. We started watching this old musical, Seven Brides for Seven Brothers, as dorky as that sounds. In that movie, they do a barn-raising number, and we thought we would try that approach for building our set. So I called the production designer that night, we broke our entire set into equal  labor for four-man construction teams. Our friends came to the ‘building party,’ with beers, food, prizes and a DJ. In four hours, they completed every single flat for the entire set of the film. All of the sets were also reusable; it was almost like a reversible jacket.

Zoe [Bell] is an amazing star who has really grown as an actor.

Tribeca:  What are you most looking forward to at Tribeca?

JW: I’m excited to see the movie on a big screen with an audience and watch their reactions. Hopefully it’s the reaction I want, which is like being kicked in the crotch several times, repeatedly.

JW: It’s a relentless, non-stop, action romp with really emotionally-gripping female characters. And just to top it off,  I’ve never seen a film like this. I will defend Battle Royale until my dying day or Kill Bill, which are amazing movies that I was inspired by, but I had never watched a movie like Raze before. At the end of the day, I make movies that I want to watch, and I managed to do that.