Alexander Reben and Brent Hoff on Robots in Residence

Would you spill your most personal thoughts and dreams to a robot, all for the sake of art? If your gut reaction is “no,” Alexander Reben and Brent Hoff and their Robots in Residence might make you think again. 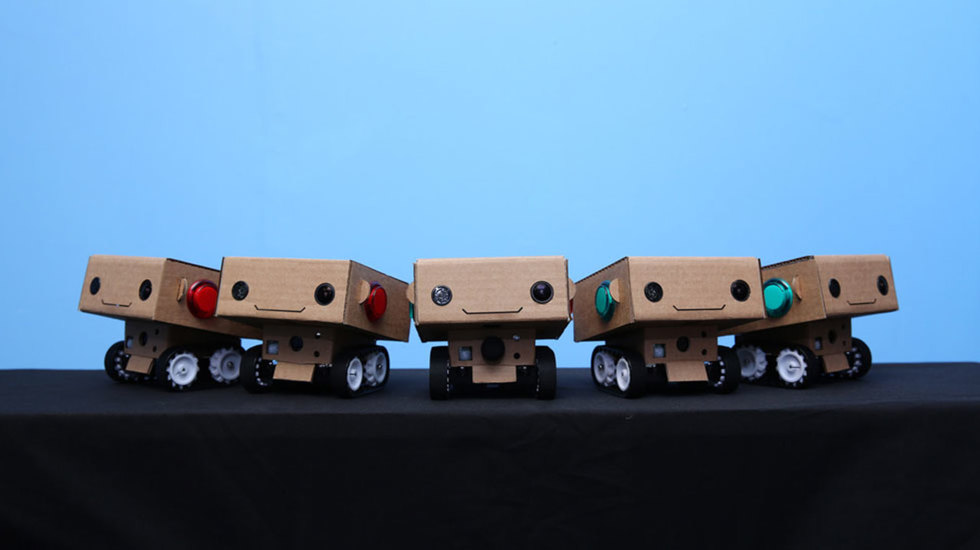 Our inaugural Storyscapes program, created in collaboration with Bombay Sapphire®, celebrates new trends in digital media and the filmmakers and content creators who employ interactive, web-based or cross-platform approaches to story creation. Alexander Reben and Brent Hoff examine the willingness of people to open up to artificial intelligence though this unexpected, futuristic twist on the creative process with their project, ‘Robots in Residence.’

Tribeca: Could you explain where the idea for the Robots in Residence came from?

Alexander Reben: The idea started as my thesis project at MIT. After the project was completed, and when I was editing the video, I found very intriguing examples of people opening up to the robots in ways that I didn’t necessarily think they would. For example, a lot of people that had probably never seen a robot before, and certainly had never been to MIT before, lay on the floor and started talking to the robot, telling the robot their problems. This was something really new and unexpected. From that point on I had done, while I was at school, a number of artistic experiments breaking down the technology around the robot and thinking about things like their curiosity and projection. We randomly collaborated with different people through the project to get to where we are now.

New Yorkers are quite a bit more outgoing by nature, so I’m not sure what’s going to happen.

Tribeca: How did you determine the questions when you programmed the robot to interview its willing subjects?

Brent Hoff: There are many psychological studies about the questions that will get people to open up. There is a thing called the Elijah effect, which suggests that people would open up to robots like they would to a therapist. The idea would be, hopefully, to use the robots to pull fascinating questions from the Internet. But for the first round, and probably for a bit of what we’re doing with Tribeca, we will be trying to get a fix on questions that are shown to make people think in ways that they might not ordinarily.

Tribeca: And the fact that Cubie is so cute must help. Why did you choose cardboard as the outer material? How did you arrive at the design in general?

AR: When we were thinking of the manufacturing we used material that was really cheap to begin with. That’s one of the reasons we chose cardboard to put everything together. When I realized that we were going to stay with cardboard for the exterior, it was pretty scary, but again, these robots are as much about psychology as they are engineering. Their form is very important. Cardboard is a very non-threatening material for people t and it makes the robot seem a bit vulnerable. That helps with the psychology of it.

Tribeca: One of the first large exhibitions of the Robots in Residence was shown as part of the IDFA DocLab in Amsterdam. How would you say the Dutch reacted to Cubie in general, and had you previously experimented with the robot with American audiences?

AR: Well obviously the context of where the robots are will change the documentary. The questions could be easily about how much you know about each location. We didn’t know too much about the Dutch before we got there, but they did open up. However, the tendency to talk to the robot wasn’t just national; there were people from all over the world interacting with the robots. I think that the robots robots take on almost human qualities when you provide them with information.

BH: I think what we’re mostly interested in is the way emotion can be brought out of someone and the ways you can use technology to achieve connection. That is something that I think was surprising for some of the Dutch people we talked to. They are not known for being really emotive, but they were surprised to see how open people were with the robot. They were as surprised as we were. We had people crying; we had people doing very odd things when they returned to the world. That’s not normal for the Dutch. New Yorkers are quite a bit more outgoing by nature, so I’m not sure what’s going to happen.

BH: Well there are a lot of people working, especially out in San Francisco, with robotic camera work. If you train actors to do specific acts, you can record scenes and then have the camera people change the scene exactly. There are many technological examples of filmmaking being influenced by robotics. Ours is a different experiment.  We want to see what a documentary made by robots would look like and how it differs from all the documentaries made by people. For example, how do robots deal with judgment? Do they open up more and explain things differently. We’re still in the process of discovery.

Tribeca: After Cubie has compiled this interview footage from its subjects, what’s the next step?

BH: It’s a very short editing process usually. For Tribeca, it will definitely be. And then later, after the fact, we’ll go back and really look at the patterns and see what we come up with.

AR: There is something a little new in that these robots are trying to record a lot of sensory readings. We can determine how well a person treated the robot, how long their questions were, how many people the robots speaks to, etc. We’re hoping to use sensory data to make the editing process easier, and that’s something I rarely do.

These robots are as much about psychology as they are engineering.

Tribeca: How did you get started working with robots?

AR: Well I’d been doing things like this since I was a kid, playing with electronics, which, at the time, was sort of weird for a boy my age. So it started there, and I’ve always been into mixing computers with other stuff, including art. Robotics itself is quite a very interesting field because it combines mechanical engineering, electrical engineering, product engineering, interactive design and psychology. And there is also a real artistic side to it.

BH: And I just like messing with people’s minds.

BH: I’ve seen a lot of films that are using technology in ways that bring out emotion in some odd ways. Just to mess with people, I enjoy it.

Tribeca: So Cubie will be making a film about its experience as part of the Storyscapes installation at the festival. Where can a festival audience see the finished product?

Tribeca:  What are you most looking forward to at Tribeca this year?

BH: I am most looking forward to seeing Robert De Niro cry to a robot.

AR: I think I’m going to be most interested to see how New Yorkers play with these robots.

Tribeca: What does the word “Transmedia” mean to you?

BH: I love that question. It’s not just a word Ingrid Kopp made up [laugh].  It’s definitely deeper than that. For me, it’s about using different media technologies to organize different narratives. We’re so used to the way that the narrative’s been presented to us in a very specific link and order, and “transmedia” is a way of opening up, giving us different works and different approaches to narrative.

AR:  It’s a new way to puncture media. Traditionally, people are more concerned with the final product than they are with the way stories are told. I think transmedia is a term that represents change.

From April 19 - April 21, Robots in Residence, along with our other four Storyscapes selections, will be featured in a public, interactive installation at the Bombay Sapphire® House of Imagination (121 Varick Street, 7th Floor).