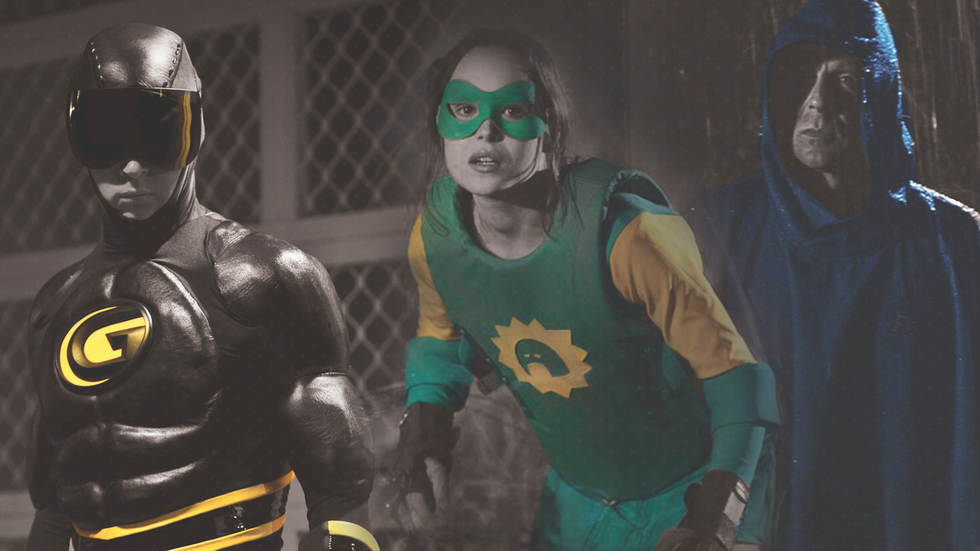 It's been a whirlwind of a year for anti-superhero cinephiles.

Back in early February, things were off to a promisingly subversive start—the trailer for DC's forthcoming Suicide Squad was livening up the internet, and Marvel's unforeseen record-breaking hit Deadpool proved that heroic blockbusters could be self-deprecating, R-rated, and wildly profane. But that good will was eradicated by the March release of Batman v. Superman: Dawn of Justice, an amazingly visual crater of movie that’s all doom, gloom, and laughable self-seriousness, and whose mostly negative reviews inadvertently spawned the wonderful "Sad Ben Affleck" meme. After BvS, superhero cinema's naysayers had all the ammo they needed to once again decry Hollywood’s current blockbuster preference.

There's now hope, though, thanks to Captain America: Civil War, which is on track to be the best-reviewed movie in Marvel's big-screen history. The third film centered around Chris Evans' shield-carrying hero is actually more of a "who's who" of Marvel Comics characters than a true one-hero-focused sequel; in other words, it's basically The Avengers 3, and its sure-to-be enormous box office intake this weekend will more than financially justify its over-bloated vibe.

Despite its introductions of Chadwick Boseman's Black Panther and Tom Holland's new Spider-Man, though, how different can Civil War really be from every other recent superhero extravaganza? It's just BvS with a smile.

If the now-routine comic book movie formula has left you numb, to the point of being one of the few people who’s opting to not see Marvel's latest film this weekend, we're here to help. There are some alternatives that deliver the basics of what behemoths like Captain America: Civil War have without the hefty price tags and familiar big-studio tactics. And here are the best ones: 5 Superhero Movies for People Who Are Tired of Superhero Movies.

The widespread belief is that The Sixth Sense is M. Night Shyamalan's best movie, and it's tough to argue against. But there's a steadily growing faction of movie lovers who are realizing that Unbreakable, the director's follow-up to that 1999 supernatural gem, is actually superior. It’s also one of the greatest superhero movies ever made, even if it’s never been advertised as one.

Written as a comic-book-inspired origin story, Unbreakable is Shyamalan's ode to superheroes and arch-villains, replacing costumes and explosive setpieces with a dark, gritty naturalism. Bruce Willis stars as a blue-collar security guard who's the sole survivor of a massive train crash, having escaped without a scratch; Samuel L. Jackson plays a comic book dealer with extremely fragile bones who becomes fascinated by Willis' character's polar opposite ability to evade any and all injuries.

In Unbreakable’s melancholy world, Superman is down-and-out security guard and Lex Luthor is a middle-aged, near-broke, superhero-obsessed nerd, and they're complicated and beautifully drawn friendship gradually descends into what could be considered a nod to Batman's Arkham Asylum story. Devoid of the CGI overload and grandiose spectacles that dominate typical superhero movies, Shyamalan's exceptionally smart riff on those films' templates is made for adults who prefer a hero's psychological make-up over his or her spandex and capes.

Unbreakable is available to rent on Amazon.

Today, James Gunn is universally known as one of Marvel’s most important directors, thanks to the unexpected smash hit Guardians of the Galaxy, the lone entry in the company’s filmography that's purely auteur-driven and, because it's Gunn, wildly eccentric. Back in 2011, though, Gunn was just a Troma Entertainment graduate with a cool screenwriting credit (for the Dawn of the Dead remake) and a cult horror-comedy (Slither) to his name. Which is why Super received little fanfare when it was released. But now that Gunn is Marvel's golden goose, it deserves a reappraisal.

Playing like Kick-Ass remixed by the Toxic Avenger, Super takes the superhero origin story and obliterates all of its viewer expectations. The Office’s Rainn Wilson is great as a nebbish short-order cook who turns himself into "The Crimson Bolt," a costumed avenger after being inspired by a public-access TV hero; using a pipe wrench, he brutally takes down criminals with his goofy catchphrase, "Shut up, crime!" And once he teams up with an excitable comic book store employee (played by a totally game Ellen Page), who's the Robin to his Batman, Crimson Bolt goes after his ex-wife's (Liv Tyler) strip club owner/drug pusher boyfriend (Kevin Bacon).

And by "goes after," think the kind of ultra-violent climax that feels more suited for a Quentin Tarantino splatter-fest than a caped crusader's adventure. Basking in Super's hard-R rating, Gunn offers smashed-in heads, exploding bodies, awkward costume-to-costume sexual encounters, and psychotic breaks. On the graphically subversive anarchy scale, Super is Deadpool minus the budget and X-Men pyrotechnics.

Super is currently streaming on Netflix.


For many young comic book fans, superheroes represent who they wish they could be; after getting shoved in lockers at school and generally made to feel like they're inadequate, vicariously living through guys like Superman and Batman can be simultaneously enjoyable and therapeutic. Oddly enough, though, that idea hasn’t been properly explored in superhero cinema, not even in the Spider-Man movies, which feature a Peter Parker who's just cool enough to still get the girl.

The underrated Australian rom-com Griff the Invisible is the closest superhero films have ever gotten to acknowledging that escapist quality. Known for his hunky beefcake role on HBO's True Blood, Ryan Kwanten is excellent as Griff, an insecure and socially deficient office worker who's constantly bullied by his more alpha-minded colleagues; as a coping mechanism, Griff dons a black, Batman-like costume at night and cleans up the streets as "Griff the Invisible," and when he falls in love with an equally socially awkward girl, Melody (Maeve Dermody), Griff finally has someone else who believes in his crime-fighting skills—even though she knows that his superhero pursuits aren’t real, but, rather, all in his imagination.

With its offbeat tone and goodhearted intentions, Griff the Invisible satisfies its romantic comedy obligations, but it's the film's underlying everyman sadness that makes it the perfect antidote to Marvel and DC's universes. Although writer-director doesn't hide that Griff suffers from a mental illness, he also never loses sight of what makes the allure of superheroes so powerful. Imagine if Stan Lee created an optimistic Fight Club.

Griff the Invisible is currently streaming on Hulu.

You love the TV show, but have you ever seen Joss Whedon’s original Buffy the Vampire Slayer story? Probably not, and if most critics had their way, it'd stay that way. Largely eviscerated by reviewers, the original 1992 movie, which a young Whedon wrote for director Fran Rubel Kuzui, is pure ’90s camp, a Clueless-lite for the horror-comedy crowd that doesn’t have any of Amy Heckerling’s 1995 classic's sharp wit. It’s clearly the work of a gifted screenwriter who's still figuring himself out, and by the time Whedon gave the material a facelift for The WB and actress Sarah Michelle Gellar, he'd perfected his voice.

But if you're able to appreciate cheesy '90s nostalgia, Buffy the Vampire Slayer is actually a lot of fun, repurposing superhero origin tropes for what's essentially the Ms. Van Helsing story. Kristy Swanson plays the shallow cheerleader who, through the guidance of a wise elder named Merrick (Donald Sutherland), embraces her destiny as the "Chosen One," the next in a long line of bloodsucker killers whose high school is being overrun by the undead.

Tonally, it's a mess, starting off as a plucky Valley Girl deconstruction but eventually becoming overly serious during its final third. Yet there are still glimpses of Joss Whedon's signature handle on dialogue and characterization, particularly during Buffy's early interactions with Merrick. Buffy the Vampire Slayer laid the foundation for everything Whedon has done since. And with its female coming-of-age slant, it's the rare superhero flick that caters to young women.

Buffy the Vampire Slayer is available on DVD and rentable via Amazon's Starz subscription.


Some comic book aficionados express their adoration for Marvel and DC through cosplay. Others, however, literally go out and fight crime.

That second group is the focal point of the HBO documentary Superheroes, a lighthearted showcase for multiple real-life costumed problem-solvers who, fortunately, don’t get the crap beaten out of them while trying to apprehend criminals. As directed by Michael Barnett, it's celebratory, whereas other filmmakers might have veered towards condescension. After all, these "superheroes" aren’t exactly Thor or Captain America. Mr. Extreme, for example, is a chubby security guard in San Diego who waits for evildoers by camping out in his van and wearing a cape and goggles; and Thanatos is a 60-year-old Vancouver resident whose heroic attire is little more than a black hat and blue jeans.

But there's also Apocalypse Meow and Zetaman, a married couple in Portland who spend their time in costumes giving food to homeless people. Stories like those help to lend Superheroes its purpose beyond simply being a case study in harmless comic book fanaticism. At their best, superheroes and comics can inspire real social change, no matter how small.

Superheroes is currently streaming on Netflix.