Here Are Your TFF 2013 Award Winners

The verdicts are in! The big winners at this year’s Festival include 'The Rocket,' 'The Kill Team,' 'Whitewash' and 'Oxyana.' 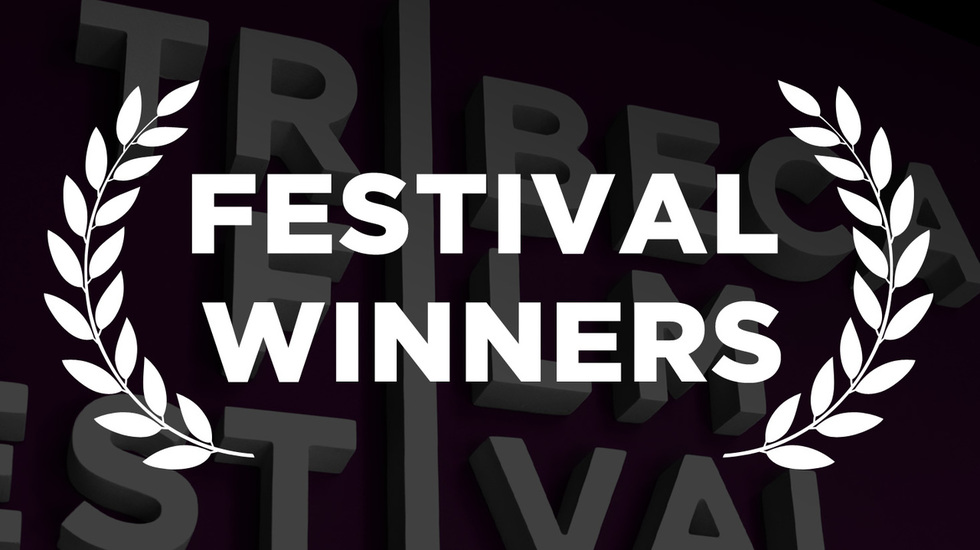 Created in collaboration with BOMBAY SAPPHIRE®, the Festival introduced a new award this year, the Bombay Sapphire Award for Transmedia. Also announced at the awards tonight were the Tribeca Online Festival feature and short film winners selected by the online audience. The winners of the Heineken Audience Awards, determined by audience votes throughout the Festival, will be announced on April 27.

In addition to cash awards and in-kind services provided by sponsors including American Express®, AKA, BOMBAY SAPPHIRE®, Citizens of Humanity, Company 3, Kodak, Persol, and Sony Electronics, the Festival presented the winners with original pieces of art created by acclaimed artists, including Joyce Pensato, Dustin Yellin, William Wegman among others.

Here are all your 2013 Festival winners:

Jury Comments:  “The Rocket is a spectacular achievement that is powerful and delightful in equal measures. Artfully structured and gorgeously shot, it chronicles the struggles of a displaced family while steering well clear of either sentimentality or despair. Complex in its tone and characterizations, the film takes an unflinching – and edifying – look at the suffering caused both by a legacy of war and the new status quo of economic globalization. And yet, while never losing sight of those grim realities, it also offers us a transcendent tale of hope and perseverance in a world that few Westerners ever have the chance to see.”

Jury Comments: “One of the great pleasures this year was the discovery of this young, non-professional actor, who plays his role with an irresistible blend of pluck, stoic determination and vulnerability. Sitthiphon Disamoe carried a big, ambitious production on his small shoulders, with charm and grace to spare.”

Jury Comments: “We’ve selected a woman who shows herself to be a totally committed and fiercely versatile actress. Veerle Baetens’ character goes from a sunny free spirit to grieving wife and mother, and no matter where we are in the course of that journey, this actress shows us the light burning inside her character, one that both sustains and destroys. She is the heart and soul of the movie, and her performance is nothing short of a tour de force.”

Jury Comments: “Before Snowfall packs a visual punch to match the force and ambition of its story about a teenage boy who pursues the honor killing of his own sister. Shot in four countries and capturing everything from a rural village to multiple European cities, from intimate domestic scenes to teeming street life, from a harrowing border crossing to a bleakly beautiful Nordic landscape in winter, it invites us into many vivid worlds and fulfills many possibilities for cinematography as an art form.”

Jury Comments: “The Broken Circle Breakdown is a true original, starting with the eclectic ingredients in its dynamic screenplay: a romance of opposites, a battle between spiritual faith and secular humanism, triggered by unthinkable tragedy, a Flemish bluegrass band. With dialogue that spans the sweetly flirtatious and the operatically confrontational -- and with dollops of humor and a pure, deep love of music – the film leaps nimbly back and forth in time to conjure vivid characters who face down literal life-or-death issues. They win both our rapt interest and our greatest empathy; they make us both think and feel.”

Jury Comments: “Whitewash is funny, strange, emotionally honest, tense, pathetic, and ultimately haunting—a broad canvas for even the most experienced director to paint. It quickly became clear that we were in the hands of a filmmaker with the intelligence, imagination and bravery to carry off this very tricky piece of material.

The ability to mix tones and the guts to stage odd, random moments and make them inevitable is one of the least-appreciated tools in a filmmaker’s skill set. The taste and attention to detail required to deliver a story this unsettled and delicate is the work of a director—and a team—that this jury hopes will continue for many movies. Their story is so credibly and invisibly constructed—and the filmmakers have such control of the material and trust in the audience— that the film reaches for metaphor without ever having had to ask for the privilege. It is a remarkable first feature, and we extend our congratulations to all involved, including two spectacular lead actors in Thomas Haden Church and Marc Labrèche.”

Jury Comments: “The Kill Team examines the fundamental flaw in the preparation of young soldiers for war that allows them to see people as targets without humanity, a culture of killing that looks to express itself even in times of peace. It masterfully combines verite' footage, talking head interviews and a private look into one family's desperate fight in a seamless cinematic undertaking.

As the drama unfolds we are faced with issues of both institutionalized responsibility and culpabilty within the military itself, the extreme importance of individual acts of courage, cowardice or allegiance to authority, and an expiation of guilt of one tormented soldier's decision to blow the whistle, too late.  We feel it raises questions that demand to be answered by our military and society at large, so that these ever enumerating acts of senseless violence cease.”

Jury Comments: “Let the Fire Burn tells a story we were stunned to realize we didn’t know. It offers a time capsule, taking us to a horrific moment in our nation’s history with a masterfully structured edit that vividly mines a trove of blistering period archive images without voiceover narration. The film ensures that a criminal and senseless destruction that cost eleven deaths—five children, six adults—shakes us to our core and is remembered with utter visceral power.”

Winner receives $25,000, presented by American Express; and the art award “Untitled (#5), from the Men in the Cities Photo Portfolio” by Robert Longo, courtesy of the artist and Metro Pictures.

Jury Comments: “Sean Dunne's Oxyana is a major accomplishment, deeply sad without being sentimental, fearless, unblinking and deft in the filmmaker’s ability to coax harrowing stories from his subjects. It is not an easy film to watch. It could be read as hopeless, but by the end, something of the light of each person shone through. It presents an acute awareness of the severity of their situation mixed with an inner battle to not let this film be the final story of them or their once-proud town. We will never forget the faces of these people, their stories and their struggles.”

Jury Comments: “The Nightshift Belongs to the Stars expresses love in its many dimensions and literally gets to the heart of the matter.”

Winner receives $5,000, sponsored by Persol, and the art award “Psycho” by William Wegman.

Jury Comments: “In just 15 minutes, Coach brilliantly shows us a world in which pain and tragedy can lead to triumph and success. It takes us through a national scandal that was handled by the film’s subject with her signature passion, grace and dignity. All together, it shows us why C. Vivien Stringer is a hall of famer and one of the great college basketball coaches of all time.”

Jury Comments: “Life Doesn’t Frighten Me is a sweet coming-of-age story that displays its writer/director’s unique voice through humor, drama and whimsy, in a way that brings true depth to his charming yet conflicted characters. Effortlessly shifting from comedy to drama, this work definitely showcases a young director with a skilled hand and a bright future ahead of him.”

Special Jury Mention
Reporting on the Times: The New York Times and the Holocaust
Directed by Emily Harrold

Jury Comments: “We were treated to five extraordinary, transmedia works, and the winner stood out for its powerful demonstration of the potential of communal storytelling. Sandy Storyline, created by Rachel Falcone, Laura Gottesdiener and Michael Premo, leverages the innovative Cowbird storytelling platform, creating a fully realized transmedia account that demonstrates both the therapeutic power of storytelling and our responsibility to bear witness. This project will be of use not only to people today but also to future generations seeking to understand a signal moment in our stewardship of the planet. Moreover, thanks to its admirably simple user interface, its elegant design both online and in physical installations and its effective yet unobtrusive curation, this project serves as a model for narratives surrounding future moments of crisis.”

The 2013 Tribeca Online Festival winners were voted on by visitors to tribecafilm.com.

Screenings of all winning films will take place throughout the final day of the Festival, Sunday, April 28, at various venues and times.