Steven Yeun dishes on his first indie role, his preparation process and the surprising similarities between the sets of 'I, Origins' and 'The Walking Dead.' 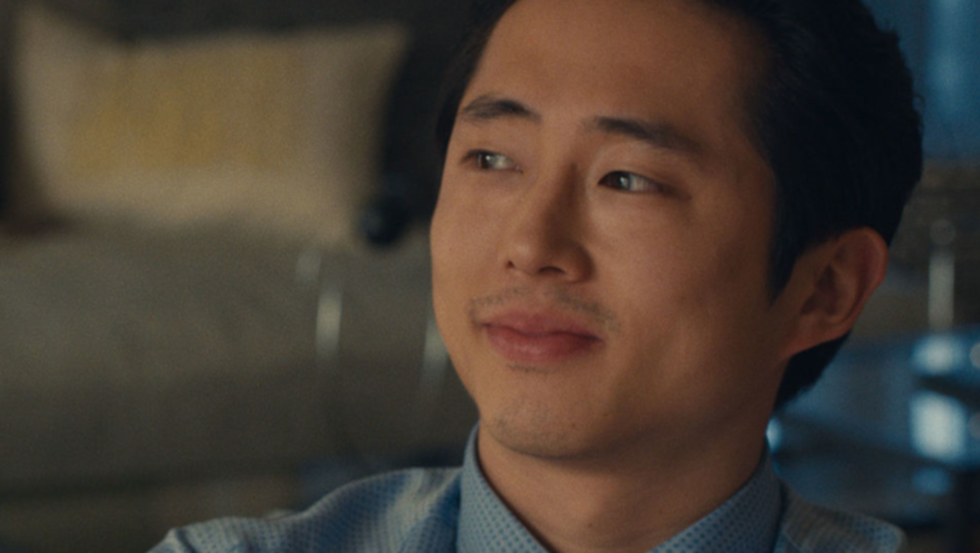 Even the most casual indie film fans will recognize Steven Yeun as Glenn, the plucky delivery boy turned hardened survivor in AMC’s The Walking Dead. Yeun is making his big screen debut in I, Origins, the sophomore feature from budding auteur Mike Cahill (Another Earth) that explores the connection between spirituality and science through a common portal--the human eye. The eyes are the windows to the soul, after all.

We got the chance to chat with the actor about his improv background, collaborating with Mike Cahill, and the reasons that people should embrace the grey area between science and religion.

Tribeca: As one of the stars of a major TV series, I imagine you’ve read many different movie scripts. What drew you to I, Origins?

Steven Yeun: Well, I actually shot my role in I, Origins about two hiatuses ago. I wanted to do interesting work in between seasons of The Walking Dead. When my agents told me that this project involved Mike Cahill, Michael Pitt and Brit Marling, I flipped. Thankfully, they let me be a part of it. I love how the film creates discussion. I knew people would step out of the theater wondering what’s real and what’s not.

What Mike and Britt do so well is ground concepts in reality, concepts that are so inaccessible and so very science fiction. I mean, in their first film, another earth appears in the sky [laughs]. Your first reaction as an audience member is like “oh great, aliens.” However, they so ground the story that you believe that something like that could happen and it wouldn’t be crazy. It’s just the same in I, Origins. Mike explores a really heavy, abstract concept that he makes incredibly plausible.

Improv teaches truth, and the truth can be funny or tragic—it takes on a life on its own.

Tribeca: What do you hope audiences take away from I, Origins?

SY: I hope that it sparks conversation. I’ve always had an interest in the crossroads between science and spirituality. I was raised in a very religious household, but at the same time, I was fascinated by science. There is room for both.  Nowadays, people live, and I guess have always lived, with ideas that are so black and white. They feel that they have to choose between faith and science. However, there is always a gray area—it’s always gray.

Tribeca: Mike Cahill is arguably one of the most exciting voices in American indie cinema. If you had to choose one word to describe him as a director, what would it be and why?

SY: Loving. He’s incredibly collaborative and supportive. He loves his actors, he loves his crew, and he loves his vision. He emulates this incredible love, on and off set. His caring totally shows in the practical way that we shot the film and in the final edit. He really pays attention to intricate details—and people should. At the same time, he also fosters creativity. Honestly, the majority of the scenes I did were improvised.

The scenes had been scripted—he had written lines and we performed them—but he let me play so that certain things came out that were improvised. That whole first discussion in Kenny’s and Ian’s apartment when Ian is talking about the eye and the girl that he saw—all those moments just happened spontaneously because he let us be free to perform and be those characters.

Tribeca: You first got your start in Chicago at Second City. What did your experience with improv comedy teach you about acting?

SY: I love improv comedy.  I think I’m very fortunate and blessed to have had that as part of my training. Improv teaches truth, and the truth can be funny or tragic—it takes on a life on its own. I think that’s the core value of it all. Acting is all about that moment that you commit, accept your reality and just go for it—then you can arguably do no wrong. I think that moment of immersion is so liberating an actor. Improv training just gives you that extra tool.

Tribeca: While your character Kenny is a professional in the iris biometric field, he provides a much needed lightness to the film. How did you prepare for the role?

SY: I did do some scientific research, which was fun , and I know people like Kenny. He’s just like my cousin and my other cousin and my friend combined. The reality of the situation is that Kenny in this movie is Asian American—he does have Asian American issues that feed him. It’s not totally obvious, but he takes a job in a field that is more about academia and less about pay. In Asian American culture, you see a lot of kids that are i-bankers or in in finance who hustle all day, party hard and make tons of money. Kenny feels that pressure too.

I thought of Kenny as someone who got into science for altruistic reasons in the beginning, and then realized that everyone around him was passing him in terms of money and success.  He becomes obsessed with living that lifestyle and tries to monetize what he’s doing but still tries to do worthwhile work. Figuring out Kenny’s motivations was the most valuable part of my preparation process.

What Mike and Britt do so well is ground concepts in reality, concepts that are so inaccessible and so very science fiction.

Tribeca: Was it a shock to go from the set of The Walking Dead in Atlanta to a small indie feature filmed in NYC?

SY: The Walking Dead is huge with massive set pieces, but it also has an incredibly collaborative environment. We help each other, we ask each other questions, we bounce ideas off of each other—the only difference with I, Origins was that the craft service table was a little bit smaller. I was happy to just sit there and observe Mike’s work.

One thing that’s really great about our show is that once the actors come onto set, we never go back to our trailers. I think that’s a normal thing, but I never knew that. We actually just watch the scene or sit and wait for our time to go on. That atmosphere builds good habits for actors, I think. On I, Origins, the process was very similar even though there were no trailers to go back to [laughs]. It is a small indie film, but as with The Walking Dead, the process of sitting, watching and playing naturally flowed together for the actors, which was nice.

Tribeca: As an actor, how important is it to maintain a social media presence? Is it almost part of the job requirement now?

SY: Obviously, that’s a metric now. You can use it as a metric. I’m sure it is important, especially when you reach a certain threshold. For me, I think I’m hovering around 500 thousand followers on Twitter. [laughs] It is crazy that 500 thousand people even want to listen to my nonsense. However, then I see someone like Ricky Gervais who has 5 million followers, and I realize that I’m super small beans in comparison.

I think that type of attention from fans must mean something. I approach social media as a way to express my thoughts. It’s not necessarily to connect with people; it’s more just like I’m saying stuff or sharing a link people might find interesting. You can take it or leave it. I’m pretty boring on social media, I think [laughs], but I’m a sucker for a stupid gif or video—those are what makes the Internet go ‘round.

I, Origins opens in select theaters this Friday. Click here for showtimes.