Thelma Schoonmaker on the craft of filmmaking via one of her unquestioned masterpieces, 'Raging Bull.' 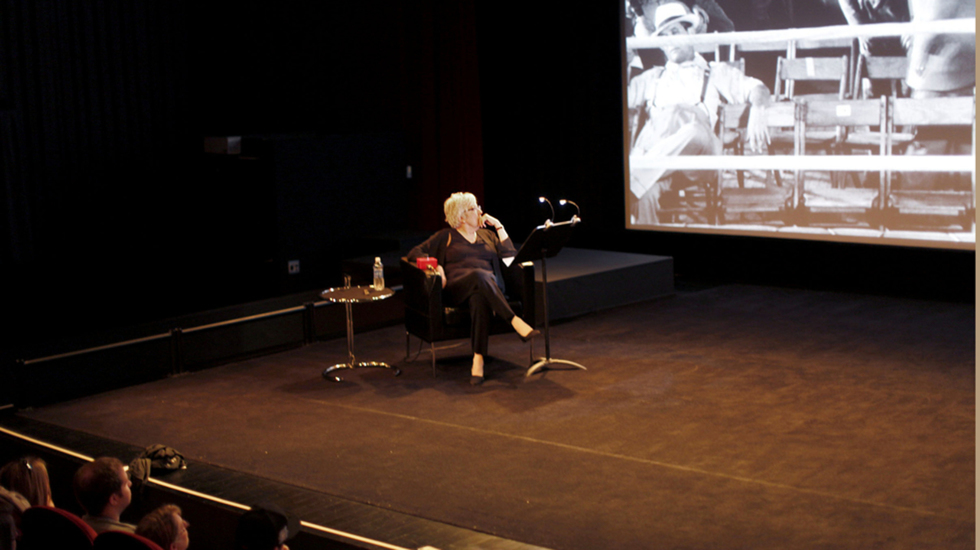 None other than the great Thelma Schoonmaker was on hand at the SVA Theater this afternoon, providing a packed Tribeca house with a master class in film editing (and, more broadly, filmmaking) by drawing upon lessons from Martin Scorsese and Robert De Niro's seminal masterpiece, Raging Bull.

Schoonmaker, of course, is Scorsese's longtime editor - she noted that she's been collaborating with him for half a century. Over the course of an hour-plus talk, Schoonmaker - with the aid of various clips from the film, some shown at regular speed, some slowed down - engaged in a detailed analysis of the picture that provided insight into her and Scorsese's working methods. Below are eight key craft-related takeaways from her talk, and the Raging Bull-specific stories behind them.

Schoonmaker spent much of her talk pointing out that Michael Powell, the great English filmmaker (and Schoonmaker's husband until his death in 1990), was a key influence on Scorsese. After having shot some camera tests for Raging Bull in color, Scorsese and Powell checked the footage out in the editing room, and Powell told Scorsese he felt like the color of the boxing gloves - red - felt wrong. Scorsese immediately agreed, considering how, when he watched boxing matches growing up, they were always broadcast in black and white, and thus decided to employ the anachronistic format.

Fascinatingly, Schoonmaker shared that Scorsese ordered various-sized boxing rings to be constructed for the shooting of the film, to better represent Jake La Motta's subjectivity. For many of the scenes Scorsese shot in a regulation-sized ring, but for a key scene where Jake beats Sugar Ray Robinson, Scorsese used a ring that was much larger than regulation size, to convey the grandeur of the moment.

3. Don't let cinematography be hindered by realism, either!

For the famous scene where Jake somehow loses a fight against Sugar Ray - despite clearly having performed better in the ring - Scorsese wanted to convey, visually, La Motta's disorientation and inability to comprehend what had occurred. To do this, he had flames set underneath the camera lens, so that the images would have heat flares and effects visible. He also filled the arena with smoke tremendously, so as to give the environment a disorienting, unusual look.

4. Don't let sound effects be hindered by, you got it, realism.

Schoonmaker extolled the talents of sound designer Fred Warner during her talk, highlighting in particular the extremely unusual sounds Warner used to emphasize the intensity of various fights. She pointed out not only the drum sounds that Warner used to stand in for punching sounds, but also the animal sounds Warner inserted into the fights in various expressive moments. In particular, a horse shuddering and an elephant braying can be clearly heard, though without Schoonmaker's guidance they might otherwise blend easily into the sound texture of the scenes.

5. Let your influences guide you.

Schoonmaker showed a number of scenes from The Life And Death Of Colonel Blimp, a Powell and Pressburger film that greatly impacted Scorsese. In particular, she focused on a sequence that concerns the build-up to a duel between Colonel Blimp and a German officer. The build-up to the duel, concerning the rules and etiquette, is meticulously presented, but the duel scene itself is over quite quickly. Schoonmaker explained that the lead-up to Jake's title match, and the title fight itself, was presented in similar fashion, with Scorsese more interested in presenting the build-up to the fight than in dwelling on the fight itself.

6. But don't let your influences guide you too much.

Colonel Blimp follows the titular Colonel over an extended period of time, and the film necessitated that Colonel Blimp appear later in the film as an aged, overweight man. Powell used a body double for some of the shots in the later scenes, and advised Scorsese to do the same for the scenes in which Jake is older and fatter, later in life. However, Scorsese and De Niro decided to have De Niro gain the weight and perform those scenes fully himself - and obviously, that worked out pretty well.

7. If you're going to shoot improv, use two cameras.

Scorsese shot a number of scenes in Raging Bull with allowing the actors to improvise, but each time he did this he made sure to use two cameras, so that all of the improvised dialogue could be covered on camera, and so cutting back and forth within the take was possible. There was one scene in Jake's kitchen with De Niro and Pesci that could only be shot with one camera, due to the size of the kitchen, and while the scene worked wonderfully in the end, Schoonmaker explained that it was relatively difficult to edit, due to the lack of a second angle.

Schoonmaker showed, slowed down, a fascinating sequence of shots from a fight scene in the film in which Jake knocks down an opponent. In the scene, tons of flashbulbs are going off, illuminating Jake and his opponent in their flare for a few frames. Showing the scene slowed down, Schoonmaker illuminated how cutting from one shot with a flashbulb flare to a second shot with a flashbulb flare made the cut look extremely smooth.