For the first time ever, the world's biggest underground hacking conference will travel from Las Vegas to NYC for this year's TFF. 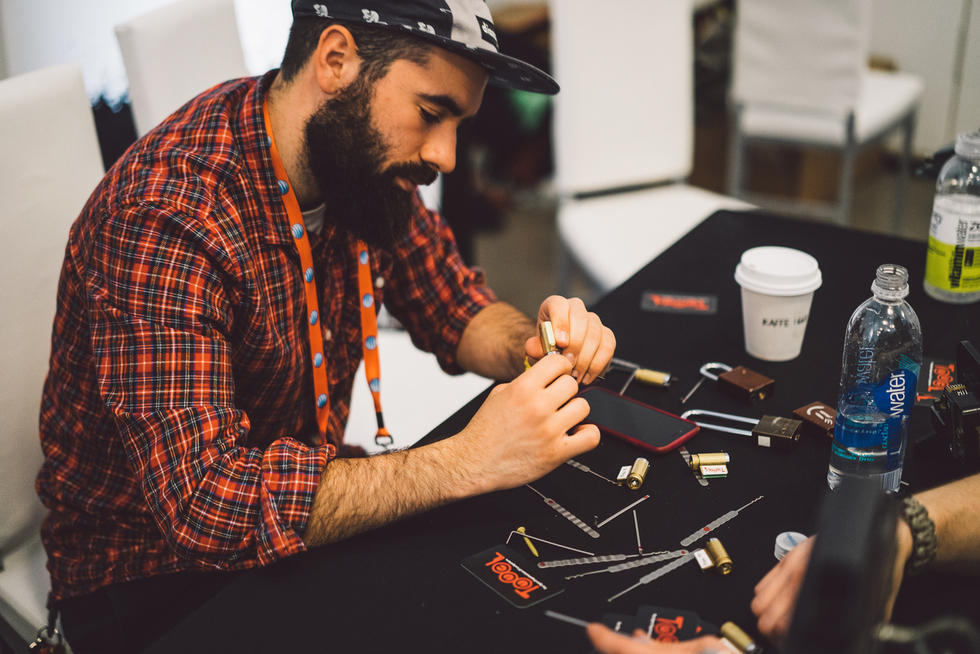 It’s okay to admit it: the thought of someone hacking into your computer, smartphone, and/or any other digital gadget makes you extremely paranoid. There’s no shame in that. It’s the fear of the unknown, but coupled with the knowledge that someone else knows that unknown and can easily use it against you. Unless you’re a tech whiz, the mechanics of hacking are understandably foreign. And that’s without even delving into the kinds of hacking that happen beyond computers and hard drives. Your brain probably hurts just thinking about it.

By the end of the 2015 Tribeca Film Festival, however, you’ll feel like the next Julian Assange. From Thursday, April 23, through Saturday, April 25, at Spring Studios, TFF will host DEF CON, the world’s biggest underground hacking conference. It's to Edward Snowden's peers what Comic-Con is to Marvel fanatics.

Started in 1993 by computer and Internet security expert Jeff "Dark Tangent" Moss, and held annually every August in Las Vegas, DEF CON opens up the mystifying world of hacking to the tech-deficient. A meeting ground for experts and ignoramuses alike, DEF CON features talks from experts, interactive "villages" where non-hackers can test their skills in various hacking workshops, and deconstructs the Internet’s enigmatic underbelly via discussions about Hollywood's attempts to fictionalize the scene.

Based on the movie industry’s current interests, the Tribeca Film Festival's DEF CON experience couldn’t happen at a better time. The most recent Academy Award winner for Best Documentary was Citizenfour, the intimate and provocative look at whistleblower Edward Snowden and how he hacked into the C.I.A.'s securest systems, and starry Hollywood movies like Blackhat and The Girl with the Dragon Tattoo have shown hackers as crime-stopping heroes. On the opposite end of the heroism spectrum, meanwhile, are the villainous mystery men or women responsible for the widely publicized Sony hacks late last year.

Here's your chance to understand it all. Spring Pass and Spring Day Pass holders will be let loose inside Spring Studios to learn exactly how hackers execute their various tricks with DEF CON's four-village program. TFF's DEF CON three-day program—curated by Opeyemi Olukemi, the Tribeca Film Institute’s Manager of Interactive, along with Dark Tangent and DEF CON's Charel Morris—will then wrap up with a special live talk from Dark Tangent on April 25, at noon.

Tamper-Evident Village
Bet you didn’t realize that you’d be considered a hacker after simply opening a private letter. The hard materials side of the hacking community hasn’t been glamourized like the computer side has been in movies like, say, Sneakers, but it’s just as active. DEF CON's tampering village will show you how to perform hacks like removing the tape that closes envelopes and breaking the plastic locks on briefcases without compromising the objects or leaving visible traces of your efforts. In other words, your sticky fingers will never leave smudges again.

Lock Picking Village
Of course, in order to inconspicuously open secure packages, you'll need to be able to enter the rooms where those packages are stored. That's why you’ll need DEF CON's Lock Picking Village, which is as straightforward as its name suggests. This hands-on section will make locked rooms and closed safes as simple to move through as revolving doors. The days of breaking credit cards in half in doorway slits are over.

Hardware Hacking Village
In this village, your brain will really be put to the test. The previous two are based around physical security, and, as a result, are far less esoteric in nature; the Hardware Hacking Village, on the other hand, is pure mental aerobics, showing visitors how to hack into electronic gadgetry and other devices usually left to programmers with MIT degrees. It'll give the term "short circuit" a deeper meaning than just being the title of the '80s movie about that wacky robot Johnny 5.

Crypto & Privacy Village
After you've evolved into a gumshoe hacker through the other three villages, DEF CON's Privacy/Crypto Village will help you protect yourself against people like…well, yourself. Contextualized through film angles like the aforementioned Citizenfour and Sony hack, DEF CON's safety-minded attraction will teach you how to effectively safeguard your devices and, more importantly, your identity. It's only right, considering that, by the time you're through with Tribeca's DEF CON event, you'll be well-versed in the flipside of the hacking game.

In addition to the four villages, the festival's DEF CON program will also include three panels. Learn more about them here.

DEF CON’s panels will tackle the representation of hacker culture, tools, and techniques in film. We aim to lower the bar to embracing authenticity on screen by exploring ways various techniques can be effectively, affordably, and consistently applied on set. Then, we'll have a frank discussion about the ethical implications of that level of accuracy. These conversations will offer both a foothold for industry professionals digging into this for the first time, and new techniques and inspiration for those who are already familiar.

Translating Hacker Culture to the Screen
Portrayals of hacker culture have often fallen into the trap of dull stereotype. Our panelists will discuss the characters and cultural backdrop of some famous hacker films and offer their perspectives on what it takes to get from the real world to the screen with fully realized, complex characters.
April 23 at 12 p.m.
Studio 1 Spring Studios

Practical Hacking for Film Makers
Ever wonder how you can stage a lock so it pops open on the perfect line every time? Or what code you can run that will be both visually interesting & technically accurate? Our panelists are here to help you shoot the specific tools and techniques used by hackers in the real world while maintaining your budget and sanity.
April 24 at 11 p.m.
Studio 1 Spring Studios

The Ethics of Accuracy
Making a commitment to authenticity grounds your film in reality, helps your actors stay connected to the story, and keeps your audience engaged, but when is getting it right going too far? Our panelists will weigh in on where the line is between accuracy on film and shooting a training manual for miscreants.
April 24 at 3 p.m.
Studio 1 Spring Studios