Featuring 27 films from 12 countries, this year’s Viewpoints section centers on the theme of identity. 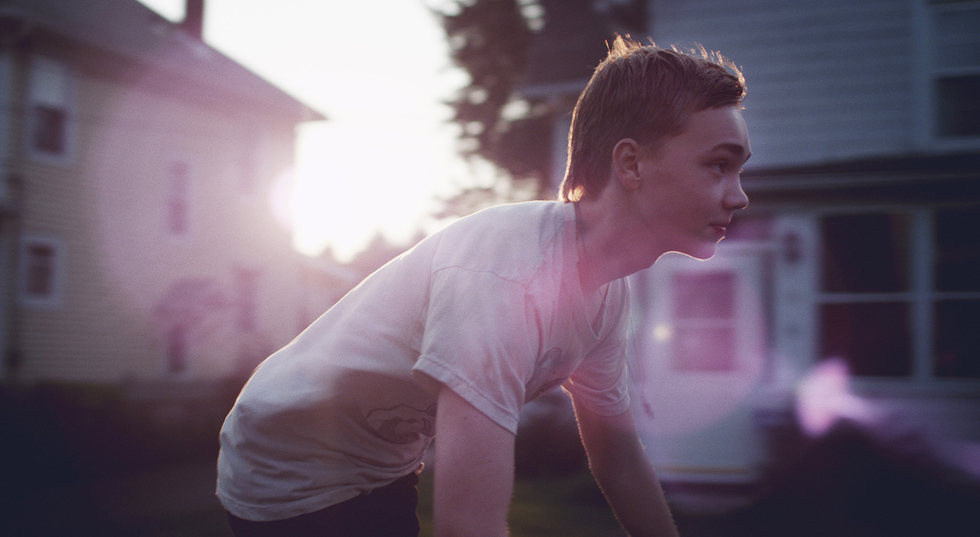 One struggle individuals from all nationalities share is finding their identity, both on a personal level and as members of their communities. For the 2015 Tribeca Film Festival, presented by AT&T, our team of programmers took that subject into considerationand curated a selection of films which contains both narrative and documentary features from around the world. From intimate personal portraits to a varied selection of powerful coming-of-age stories to larger, more public struggles, the films in this year’s Viewpoints section examine the search for identity from all angles.

When former Utah governor Jon Huntsman was appointed United States Ambassador to China, the charming career politician arrived at his new post with his entire family—including his adopted Chinese daughter, Gracie. Huntsman's diplomatic struggles and triumphs are explored in the broader context of China’s relationship with the rest of the world, and intersected with Gracie's personal experience living in China as a Chinese-American. In Mandarin, Cantonese, English, with subtitles.

TFF alumnus Onur Tukel plays a husband who innocently reveals on talk radio the worst thing he's ever done. Though his gaffe never makes it on air, it sets off a chain of hilariously uncontrollable events that draw his wife and another couple into an uneasy mixture of infidelities, confessions, and severed body parts.

Life for the Kendalls has been burdened by grief and claustrophobia. Faced with caring for one child with special needs and another with PTSD, the family struggles for a sense of stability at home in their Staten Island hamlet. When a secret from the past is revealed, it threatens to tear them apart.

Sarah’s (Dianna Agron) mundane life in a Nevada desert town is turned upside down with the arrival of Pepper (Paz de la Huerta), a mysterious female drifter, who leads her into a life of seedy strip clubs and illicit drugs. Their passion inspires Sarah to break free of her past and seek out a new life of her own.

Adopting an observational style, Being 14 captures all the secrets, trials, and anguish of adolescence, as experienced by best friends Sarah, Louise, and Jade in their final year of middle school. The narrative plays like a documentary in each true-to-life scene; the camera is witness to their lives unfolding, as it unobtrusively records the moments of a year, after which everything will change. In French with subtitles.

In this expressionist odyssey exploring the lonely side of entering adulthood, struggling new mother Molly (Eléonore Hendricks) joins her old high school group of guy friends at a secluded mountain home. Amidst tears, laughter, and mushrooms, they connect with nature, one another, and themselves.

Amy Kohn’s fascinating documentary offers a peek into the practice of Christian courtship, wherein a woman hands over the responsibility of finding a husband to her parents and the will of God. Such is Kelly’s path, enlisting her adopted spiritual family to find her Mr. Right.

Crocodile Gennadiy, a real-life, self-appointed savior, who works tirelessly to rescue homeless, drug-addicted youth from the streets of Mariupol, Ukraine. At the same time, he challenges dealers and abusers. Despite criticism, Gennadiy is determined to continue his work. Sundance Award-winning director Steve Hoover’s second feature is a bold portrait of a man on a mission. In English, Russian with subtitles.

Louis begins to question his lifelong friendship with Jack, after a simple errand to buy his daughter a birthday gift turns into a visit to a drug dealer. Director Michael Larnell combines an earnestly realistic narrative with documentary-style interviews in which the characters muse on their futures, their impact on those they love, and the nature of friendship.

In the fall of 2005, 20-year-old Ryan Ferguson received a 40-year prison sentence for a murder that he did not commit. Over the next ten years, his father Bill engages in a tireless crusade to prove Ryan’s innocence. Interspersed with footage from the Ferguson family archive, Andrew Jenks’ film looks at the personal consequences of a wrongful conviction.

Patón, with his fiery temper and aggressive play, is the veteran star of his city’s soccer team. When his transgressions land him a lengthy suspension, he considers retirement, while discovering a world that consists of more than just feet and fists. This coming-of-middle-age tale reveals the predicament of leaving the arena where you most feel at home. In Spanish with subtitles.

Gored centers on Spanish bullfighter Antonio Barrera, holder of the dubious title of “Most Gored Bullfighter in History,” as he grapples with the end of his career. Captivating footage of past and present bullfights reveal Barrera’s tremendous passion for the sport, as well as his seemingly irresistible urge to confront death at every opportunity. In Spanish with subtitles.

When a friend's suicide leaves behind a mysterious computer drive, a fringe hacker and accomplished computer technician come together to decipher the message left in his wake. First-time filmmaker Carleton Ranney effortlessly combines a low-fi aesthetic with an intensely ambitious sci-fi story, creating a work that manages to satisfy as both a retro throwback and a forward-thinking indie drama.

Growing up in a rural town filled with violent delinquents, Jack has learned to do what it takes to survive, despite having an oblivious mother and no father. After his aunt falls ill and a younger cousin comes to stay with him, the hardened 15-year-old discovers the importance of friendship, family, and looking for happiness even in the most desolate of circumstances.

An angel falling from heaven to hell unexpectedly lands in a Mexican village where his presence affects the villagers in surprising ways. Inspired by the biblical story, Lucifer is a mesmerizing, moving, and unique exercise in form, presented in the director’s own format, Tondoscope. In Spanish with subtitles.

Orion: The Man Who Would Be King
Directed and written by Jeanie Finlay
(UK)—World Premiere, Documentary

Millions of Americans clung to the hope that Elvis Presley faked his death. For the executives at Sun Records that fantasy became an opportunity in the form of Orion, a mysterious masked performer with the voice of The King. But who was the man behind the mask? In this stranger-than-fiction true story, Jeanie Finlay explores a life led in service to those who couldn't let Elvis go.

Uptight and insecure Jane breaks down when her live-in boyfriend must move from Los Angeles to New Orleans for an acting gig. Jane's anxiety worsens upon the arrival of Laura, Austin's wild childhood friend. Unable to deal with each other without Austin, the two women embark on a road trip to see him, forming an unexpected friendship along the way.

High school teachers Jeff and Anne (Adam Pally and Sarah Burns) are work BFFs all too familiar with the woes of romance. Desperate to turn their luck around they take on new personas and embark, with gusto, on an adventurous summer of uncharacteristic encounters. Slow Learners is a charming, comedic crash course in discovering who you really are.

Lebrun is an entrepreneur from The Democratic Republic of Congo who goes to China intent on making a fortune selling political T-shirts. When things don’t go as planned Lebrun spends more time in karaoke bars and falling in love than he does on business. Somewhere between documentary and fiction, this fascinating story explores new trade routes and their impact in two separate continents. In Cantonese, English, French, Lingala, Mandarin with subtitles.

Social Service officer Lakshman Joshi is led on a chase through the dark gutters and rain-soaked back alleys of Mumbai by a shadowy figure. His pursuit leads him to Paradise, a seedy nightclub seemingly at the center of the kidnapping ring he is investigating. Joshi's hunt brings back memories of his own kidnapped daughter, as his past and current reality converge. In Marathi with subtitles.

In Chris Modoono’s hilarious directorial debut, a broody and foul-mouthed elementary school teacher, Ethan Collins, finds his life turned upside down when his wife leaves him. Stuck with a group of precocious fifth graders, and fraught with fizzling writing aspirations, Ethan uses the school play as a last-ditch effort to fix his marriage. Will this be his greatest accomplishment or his most misguided lesson to date?

A rare, insider’s view of an FBI undercover investigation in progress, (T)ERROR follows a 63-year-old informant in his attempt to befriend a suspected Taliban sympathizer, and build a fraudulent case against him. Lyric R. Cabral and David Felix Sutcliffe's startling and timely exposé questions the sacrifices that are being made to prevent terror in the United States.

Shot over a period of 15 months, this hands-off documentary follows siblings living in a Bucharest slum. With their mother in jail, Toto and his two sisters, Ana and Andreea, live in what appears to be a communal drug den. As Ana drifts away with frequent drug use, Toto and Andreea must stick together in an orphanage, awaiting their mother’s return. In Romanian with subtitles.

Director Patrick O’Brien is TransFatty, the onetime NYC deejay and Internet meme-making superstar. In 2005, O’Brien began to document his life after being diagnosed with ALS and given only two to five years to live. TransFatty Lives is a brazen and illustrative account of what it's like to live when you find out you are going to die.

An aquatic weed threatens the lake of the small American border town of Uncertain, Texas, and consequently the livelihoods of those who live there. As some of the men in town attempt to figure out their future, they confront a past that haunts them.

A group of disillusioned teenagers wander about in the restless hours leading up to an anti-immigrant riot that took place in Rostock, Germany, in August of 1992. The impending incident is seen through the experiences of three individuals: a Vietnamese factory worker, a local politician, and the politician's teenage son, Stefan. In German, Vietnamese with subtitles.

Everything the Angulo brothers know about the outside world they learned from obsessively watching movies. Shut away from bustling New York City by their overprotective father, they cope with their isolation by diligently re-enacting their favorite films. When one of the brothers escapes, the world as they know it will be transformed. A Magnolia Release.

No doubt our Viewpoints program will spark conversation among festival goers meeting at our new Festival hub at Spring Studios. We’re thrilled to offer movie lovers and our TFF community a space to gather, collaborate and mingle between screenings, special events, and panels.

Our Viewpoints program will not be the only spark for discussion at Spring Studios next month. We’re pleased to say that the 2015 Tribeca Film Festival will include feature films from 31 countries, including 64 World Premieres, 3 International Premieres, 13 North American Premieres, 5 U.S. Premieres, 11 New York Premieres and 1 restoration. Out of these already impressive numbers, a grand total of 119 directors will present feature works, with 40 of these filmmakers making their feature directorial debuts. So be sure to drink in all the unique content that the Festival will be offering and join the conversation: