Here Are The 7 Films In The Midnight Section

What do alien invaders and chupacabras have in common with a sword-wielding maniac and the ghost of a turn-of-the-century murderer? They can all be found in our Midnight program. 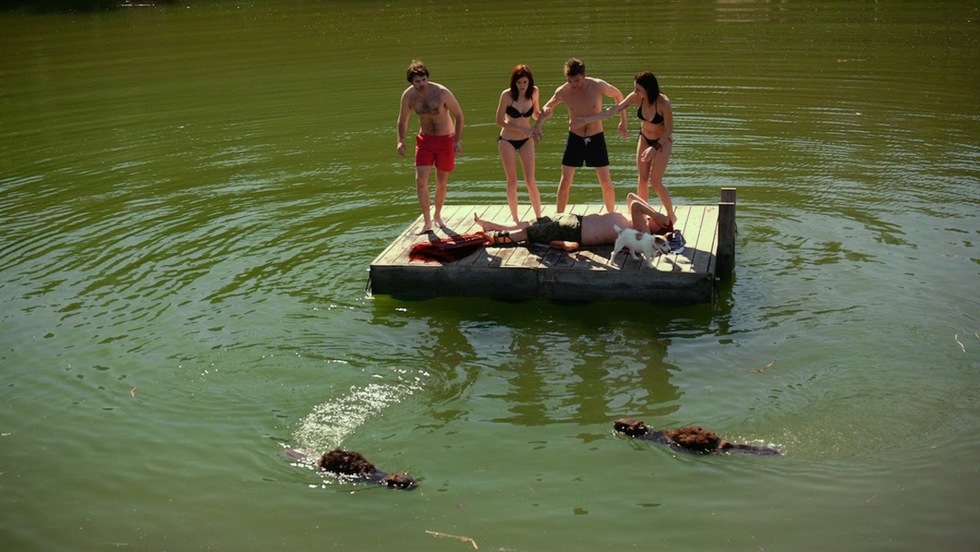 The Tribeca Film Festival, presented by AT&T, is pleased to announce the selections for our Midnight section. Supernatural forces, deranged teenagers and reanimated woodland creatures populate this collection of boundary-pushing genre films from around the globe. Too terrifying, strange, or downright hilarious for daylight hours, these 7 films welcome the Midnight Movie moniker with pride. A moody, intelligent new take on the maniac in the woods genre Preservation, written and directed by Christopher Denham, will have the honor of opening the 2014 Midnight Section.

Film archivist David and his wife are perfectly happy—or so he believes. When a looming secret shatters their marriage at the same time as a turn-of-the-century film reel he is studying reveals their house to be the site of a 1902 multiple-murder, David begins to unravel, and the house’s eerie history threatens to repeat itself. Dripping with tension and chilling to the core, this visceral Irish ghost story is a visually arresting and genuinely shocking journey into the darkness within.

A samurai-wielding figure wearing a white dress lurks menacingly in the forest, waiting to descend upon an unsuspecting village in the muddy backwaters of rural East Germany. As heads roll with each stroke of his sword, dutiful, straight-laced cop Jakob becomes increasingly powerless to resist the draw of the Samurai’s feral otherness. The two enter into a bizarre folie-a-deux as Jakob is forced to confront his own carnal impulses that he has long sought to repress.

The Vicious Brothers (Grave Encounters) return to Tribeca with their latest heart-pumping thriller. Five friends set out to a cabin in the woods for a fun weekend getaway—that is, until extraterrestrial visitors turn it into a fight for their lives. The group is pulled from their reverie when a flickering object crashes deep in the woods. As they investigate, the friends stumble across an alien spacecraft, and its inhabitants have not arrived in peace.

A group of five American friends on the cusp of adulthood travel to Panama to relax and reconnect. They befriend a local woman in their hotel bar—and despite some ominous whispers—she goes against the specific instructions of her brother and brings the Americans on a daytrip into the pristine falls at the nearby jungle. What begins as an innocent outing to a picturesque waterfall quickly turns terrifying after she suddenly goes missing. As night closes in, the friends realize too late the truth behind the rumors—the legendary, blood-sucking Chupacabra is now stalking them. In English and Spanish with subtitles.

There comes a time in every fifth-year senior’s life where they must either accept the impending ‘real world’ of jobs, marriage, and payment plans or shirk that responsibility in favor of playing the most glorious intramural football game your school probably doesn’t really care to see. In this full throttle and hilarious send-up of inspirational sports movies, director Andrew Disney harnesses every cliché and overused trope to tell the greatest (and only) intramural sports movie of all time. Featuring an ensemble cast including Kate McKinnon, Jay Pharoah, Beck Bennett, and Nikki Reed.

Three family members head deep into the woods for a hunting trip that doubles as a distraction from their troubles at home. When all of their gear is stolen, they turn on each other, but soon realize there are much more treacherous forces at work. Actor Christopher Denham takes his second turn in the director’s chair with this finely crafted horror-thriller starring Pablo Schreiber (The Wire, Orange is the New Black), Aaron Staton (Mad Men), and Wrenn Schmidt (Boardwalk Empire).

You know the story: sexy teens head to a secluded lakeside cabin for a weekend of debauched fun, only to be menaced by a mysterious force picking them off one by one. But here, the culprit proves to be a horde of rabid zombie beavers! The B-movie creature feature is making a comeback, and with 2 million views of its trailer in its first two weeks alone, Zombeavers is a veritable phenomenon. And it’s finally here. Special midnight screening.

Packages and passes are on sale now for American Express® cardmembers and will go on sale to the general public on Monday, March 11 at 11am:  Learn more about TFF 2014 Ticket Packages.