5 Things We Learned About Tina Fey During Her Tribeca Talks: Storytellers Conversation 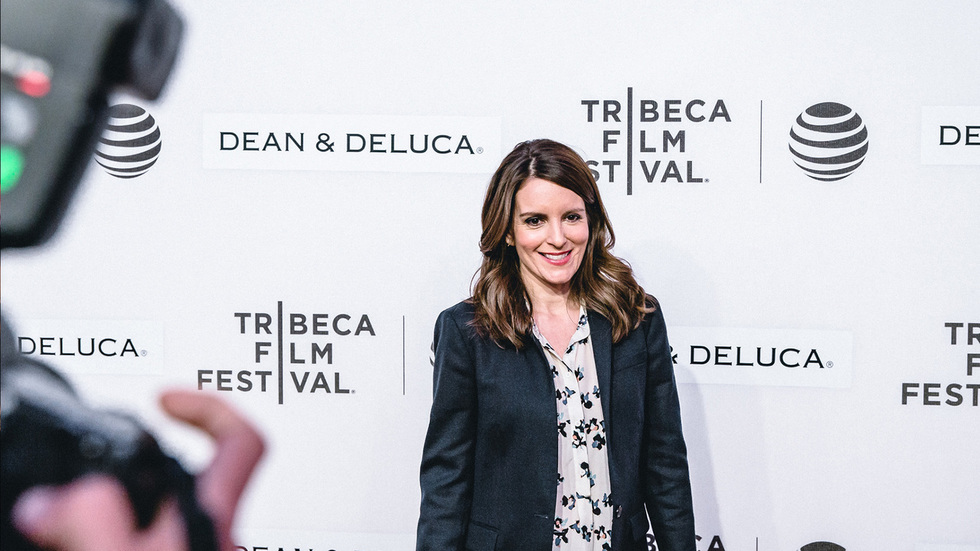 Ever wonder why Tina Fey always appears to be in a good mood? Well, one possible explanation is that she's not on social media, and is therefore unable to see or read any slander being typed her way—as if anyone whose last name isn't Palin would ever have anything bad to say about her. That Twitter/Facebook silence is completely intentional. "I George W. Bush it," Fey said at her Tribeca Talks: Storytellers event yesterday, held inside the John Zuccotti Theater @ BMCC. "Remember when he was like, 'I don't read the paper.' Smart man!"

For a little over an hour, Fey offered entertaining nuggets of personal info like that to interviewer, and longtime friend, Damian Holbrook, a senior writer for TV Guide and a close acquaintance of the Saturday Night Live veteran/30 Rock creator's since they were 12 years old. (Indeed, he's the inspiration for the "Damian" character in Mean Girls, which, of course, Fey wrote.)

Fey's lighthearted and entertaining chat with Holbrook covered a wide array of topics, most heavily the Netflix series Unbreakable Kimmy Schmidt, which she produces and has just returned for its second season, but also the 19 years she's spent living in New York City, her days as an improv comic at Chicago's Second City, her current pop culture fixes (movie: Disney's Zootopia; TV show: HGTV's Fixer Upper), the daily routine of cleaning up her untrained poodle's urine all over her home, and the Mean Girls Broadway musical she’s in the midst of developing.

While all of those subjects yielded fun anecdotes, five talking points in particular stood out the most and gave the packed BMCC audience some new insight into Hollywood's funniest woman. Here are the conversation's five biggest revelations.

She has no intentions of co-headlining any TV shows with Amy Poehler.
From the outside looking in, it seems like a no-brainer. Both Tina Fey and Amy Poehler have successfully commandeered their own TV series, they're both hilarious, and, of course, they're BFFs who’ve proven to have phenomenal small-screen chemistry as two-time hosts of the Golden Globes. So you'd think that a TV show co-anchored by Fey and Poehler would be a creative home run, but one of the two most important people in this equation would disagree.

"We're regarded as a comedy team, which is certainly fine by me," said Fey when asked by Holbrook if there'll ever be a Fey/Poehler series. "We're actually both alphas. So it works in short spurts, but I don't know if we would make a real dynasty."

She loves that O.J. Simpson show as much everyone else does, if not more.
Although she's not planning on co-conquering the television world with Poehler anytime soon, Fey has been watching other women kill it on TV recently—Sarah Paulson, specifically.

Fey admitted to being a huge fan of FX's American Crime Story: The People vs. O.J. Simpson, so much so that she actually called the Television Academy for the first time in 10 years to make a special request. "You have to pick which [voting category] you're in, and I was always [categorized] as a writer," she told Holbrook. "I could have had acting, but I just never did. I did it just so I could vote for Sterling K. Brown [who played Christopher Darden on The People vs. O.J. Simpson] and Sarah Paulson."

She's horrified by the likes of Donald Trump.
During that same O.J.-minded exchange, Fey reflected on how she playfully channeled Marcia Clark, whom Paulson played on the FX series, during Unbreakable Kimmy Schmidt’s first season, which naturally brings up Fey’s most popular celebrity-woman-in-power impersonation of all: Sarah Palin.

After commenting on how their conversation was happening on NYC’s Primary Day, Holbrook asked Fey if she misses SNL's opportunities to lampoon the current political climate in 2016's ridiculously spoof-ready presidential race. "Looking back on 2008, now it looks like an episode of The Andy Griffith Show," she joked about the comparably uneventful competition between Barack Obama and John McCain. “[The 2016 race] is like, 'Ryan Murphy's American Horror Election!'"

When it comes to her acting career, she's just winging it.
Earlier this year, Fey turned critics' heads by adding seriousness into her comedic regimen in the political satire Whiskey Tango Foxtrot. Holbrook pointed out how drastically different that role was compared to her previous film, the raunchy Amy Poehler collaboration Sisters, which was the first time Holbrook, as well as general audiences, had ever heard Fey curse on screen.

To Fey, those two wildly unlike-each-other films weren’t part of any kind of professional strategy. When Holbrook asked Fey to discuss her toughest film role, she quipped, "I don't know, I don’t have my, like, Danish Girl—nothing that a real actor would say, ‘That was hard.'" For her, selecting which big-screen parts to take is more a matter of personal interest than meticulous decision-making. "If [people] ever need proof that I don't have a career plan, they can look at Sisters and then Whiskey Tango Foxtrot."

Unsurprisingly, she's an awesome mom.
Near the end of the conversation, Holbrook asked Fey if there are any current female celebrities that she'd like her two young daughters—10-year-old Alice and 4-year-old Penelope—to look up to other than herself. "As a mom, a very square mom, I look for role models for younger women that are not super-sexualized," she said. "I think the balance tips to looking really hot, but that [also] leads very quickly to slut shaming." She quickly clarified that last statement, with a smile: "That's one thing no one could ever say about me."