This week in our Vine interview series, we talk to Nick Confalone about making Vines with his baby, his collaborations with fellow pro Viner Meagan Cignoli, and his vision for the future of the medium. (And he even tells us how he'd make the Vine of "Rocky"!) 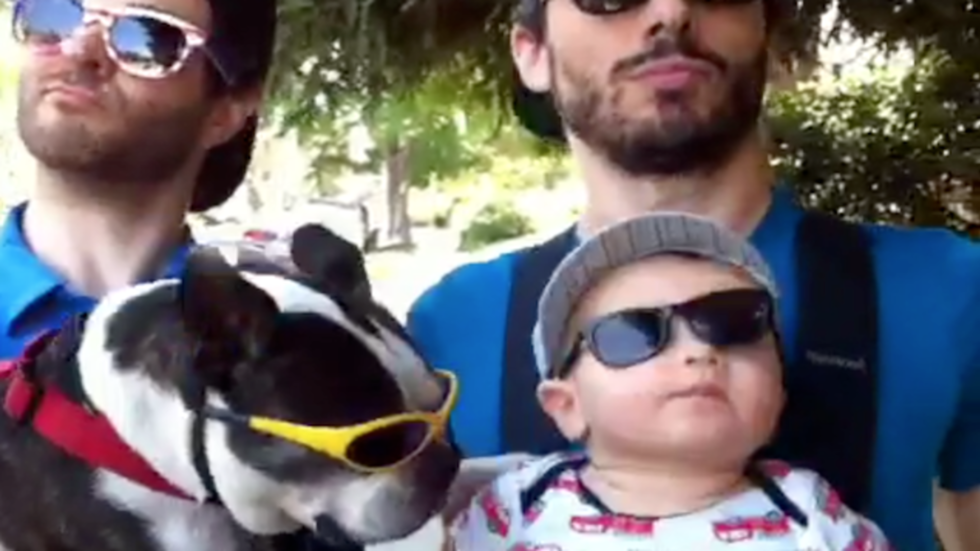 Nick Confalone is an LA-based screen and television writer (Johnny Test, Kick Buttowski, Fish Hooks) who has an impressive collection of comedic Vines co-starring his baby (and thus making him the coolest dad ever). In addition to the Vines he made that were finalists in our #6SECFILMS competition, his work has appeared on CNN, Mashable and Papermag. Also, did we mention he's the coolest dad ever?

Tribeca: Your son (who is the cutest!) seems to be your main muse, and you catch these amazing reactions from him. What made you decide to start filming your baby, and how does he inspire your Vine ideas?

Nick Confalone: I’m a writer and I work from home. I spend a lot of time actively trying NOT to write, which means playing with my baby, playing with my phone, and combining the two if possible. I’m really drawn to the Vine format — I think it’s because it’s the way I grew up making movies on my Dad’s hi-8 camcorder. You couldn’t edit. You had to stop in midaction if you wanted a cut, and whatever you shot was usually “good enough.” To watch those movies I made as a kid, I think the viewer needs to bring a lot of imagination to what they’re seeing. I feel the same way about Vine. The fun is that we’re all using the same tools. For some people, a clothes hook is a clothes hook. For me, it inspires a Captain Hook vine.

It’s really hard to coordinate timing with a cameraman. It’s why you hear so many Vines that start with, “go!”

Tribeca: A lot of your Vines have this wonderful sense of spontaneity about them, even though some planning had to have gone in them (especially with your “Royal Wedding” series.) How much time do you spend planning a Vine, and how much room do you leave for improvisation?

NC: The process usually boils down to some variation of this: I actually don’t plan very much. I end up shooting the Vine over and over, and this process ends up feeling like I’m in an editing bay—determining which shots are essential, the pacing, etc. As that’s going on, I usually have an idea in my head, and I try to get the baby to cooperate. The final Vine is almost ALWAYS something where we meet in the middle. For example, I have this microphone so I wanted to make a Vine where he was a talk radio host. But he just wanted to say “bah bah bah bah bah” over and over, so we ended up with a Vine about Brian Wilson struggling to hold the Beach Boys together and record Barbara Ann.

In general, I think we’re all inspired by each other.

Tribeca: You’re a regular collaborator with Meagan Cignoli. Are there any Viners out there you’ve enjoyed working with, or hope to work with one day?

NC: Meagan was one of the first artists on Vine (along with Pinot and Mark Weaver) who really showed me that the medium isn’t just for making stupid movies with your cats and/or babies (ahem… me?). She was there right at the beginning, doing beautiful stop motion and putting a lot of thought into her work. It’s always great and inspiring to collaborate with her because we bring entirely different skills to the table, and I think we both respect each other so much that we’re very willing to trust the other.

It’s like a whole do-it-yourself filmmaking community growing up right before our eyes.

I’ve also made a ridiculous Vine with my baby and Curtis LePore’s dog. Curtis is practically a dad in his own right to an adorable dog named BusterBeans.

In general, I think we’re all inspired by each other. It’s a tight community, I think, of the people who take it very seriously. Those of us who haven’t met in real life will make Vines especially for each other (usually deleting them quite quickly). Some of us have met up a few times (the NY or LA people), and it’s wonderful to meet the person behind the Vines. Every time, I got the immediate sense that this person’s Vines are a pure expression of who they are, in wonderful, truthful ways. Marlo Meekins IS the sum of her Vine feed, in a weird intangible sense. The same for everyone I admire. Um, in conclusion, everyone is amazing.

It can be overwhelming to have hours of footage to condense into a few minutes. With Vine, you only shoot what you’re using.

Tribeca: What’s the average amount of time you spend making a Vine?

NC: Sometimes magic happens on the first take, as with this MTV cribs vine. Conceptually, it’s just a pun, and not even a very funny pun. But…

Other times I will try for days to get an idea to work. Usually it’s my fault for not planning well, and I only get a few good tries before the tired bored baby eyes come out. I think for this one Baby Vs. Giraffe Vine, I tried for a whole week. There were weird misspelled “Jiraf fod” signs stuck to everything in the house. But in the end, I think this Vine shows that when you nail the exact shots and vision, the final result is pretty good:

NC: I’ve made some youtube videos. Every year growing up, my dad would tape us coming down the stairs on Christmas morning, and I edited them into a montage. I guess videotaping my kid is an inherited trait.

I’ve worked as an editor for Nike, editing short interview videos with sneaker designers. It can be overwhelming to have hours of footage to condense into a few minutes. With Vine, you only shoot what you’re using. You’re doing all the editing beforehand, in your head (or on paper if you can draw like Marlo Meekins). You’ve got to nail the timing as you go since you can’t trim things afterwards. That’s why I tend to shoot my Vines myself. It’s really hard to coordinate that timing with a cameraman. It’s why you hear so many Vines that start with, “go!” Jordan Burt’s videos are so impressive because it’s like the cameraman is an extension of his brain. Their timing is incredible.

I’ve also written a lot of kids’ animation. I bring a lot of clichés from that world to help speed up my storytelling. I know that when you pull out a sharp object, it makes a “shinggg” sound. I don’t think it’s just an added touch—it actually helps the viewer understand, “oh, that’s a sharp thing,” faster than they would without the sound.

NC: The development team is incredible. It’s like they change things before I even realized I’d have wanted it changed. They're so hardworking and responsive and listen to their users. I love them.

It would be nice to be able to change the title of a post after it’s been posted. I’ve definitely made some mistakes and wished I could go back. But on the other hand, maybe it’s more true to the spirit of Vine that you can’t edit it.

Tribeca: Now that Video on Instagram is an option, do you planning on experimenting with the new app?

NC: Instagram is fun to mess around with for me, but I don’t think it ultimately competes in the same field as Vine. They fill distinctly separate niches. A feed of my friend’s photographs interspersed with videos is not the same user experience as browsing Vine à la channel surfing.

If you want to tell the story of Rocky in 6 seconds, the essentials would be four shots.

NC: Try to make Vines you’d want to watch. If you wouldn’t want to watch it, don’t save it. I’ve seen so many creative people make so many amazing videos—people who inspire others, and so forth. It’s like a whole do-it-yourself filmmaking community growing up right before our eyes. I hope people want to be a part of that, rather than just shooting 6 seconds of their entrée at Applebees.

I think the real challenge is answering the question, “how do you fit a story into 6 seconds?” It’s not very much time, just like a four-panel newspaper comic isn’t very much space—both formats require you to find the simplest way to say what you’re trying to say. And like all good stories, there’s a beginning, middle, and end. A setup, elaboration, and punch-line. A good 6-second vine story has the same basic three-act structure you see in every 2 hour movie.

I love storytelling in 6 seconds. It forces you to pare your story down to its essentials. If you want to tell the story of Rocky in 6 seconds, the essentials would be four shots:

It’s ridiculous and funny in 4 shots, but those four shots are the essentials of any sports movie, or ANY movie for that matter. (1) An underdog with no chance (2) struggles really hard and (3) wins in an unexpected way, and (4) connects with another person along the way. If you can hit those four beats in 6-seconds, you just made an awesome Vine.

Julia Pugachevsky is Tribeca's Vine Correspondent (among other things). Check out her round up of the Week's Best Vines every Friday morning on TribecaFilm.com, and come back next Wednesday for another interview with an expert Vine user (and see last week's, with Pinot).