We Found a Toynbee Tile Right Outside TFF HQ!

The Festival's senior programmer just uncovered one of the enigmatic artifacts featured in Jon Foy's 2011 documentary 'Resurrect Dead: The Mystery of the Toynbee Tiles' on our home turf. 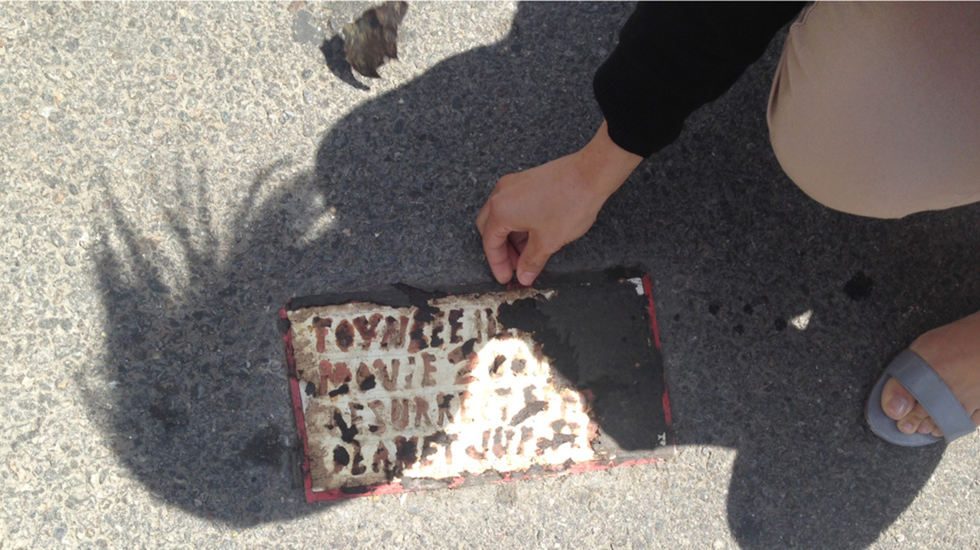 Last Friday, while crossing the intersection at Greenwich Street and North Moore, Senior Programmer Cara Cusumano noticed a suspicious-looking rectangular patch of tar in the asphalt. Remembering an investigative documentary from a couple years ago, on a hunch she enlisted the help of Festival Director Genna Terranova, who peeled back the tar coating to confirm their suspicions - our intersection has been tagged by the Toynbee Tiler.

Toynbee Tiles are a crop-circle-esque phenomenon profiled in The New York Times, on NPR, and in conspiracy theorist blogs from all corners of the internet. The tiles all mysteriously say variations of the same phrase: "Toynbee idea / Resurrect dead / Movie '2001' / Planet Jupiter."

Jon Foy's 2011 documentary on the subject, Resurrect Dead: The Mystery of the Toynbee Tiles, posed a potential tiler who, inspired by Stanley Kubrick's 2001: A Space Odyssey and British historian Arnold J. Toynbee, theorized a human colony on Jupiter made up of rehabilitated dead souls. As Foy investigates in his documentary, the man had been rejected by multiple news outlets when he tried to spread his message and, in a more grassroots approach, hit the streets with his tiles.

This supposed tiler's work, prevalent in the late '80s and early '90s, was centralized in Philadelphia, although tiles have been spotted as far as Rio de Janeiro. The trend saw a second life early in the new millenium as well - several years after the film's tiler had supposedly passed, making it seem unlikely that there was ever just one tiler. (It should be noted that North Moore St. at this intersection has been undergoing extensive rehabilitation for over a year, so you never know!)

Whether the tile on Tribeca's turf is an original relic from the '90s or the work of a more contemporary copycat, the piece adds a sense of historical mystery to the neighborhood.