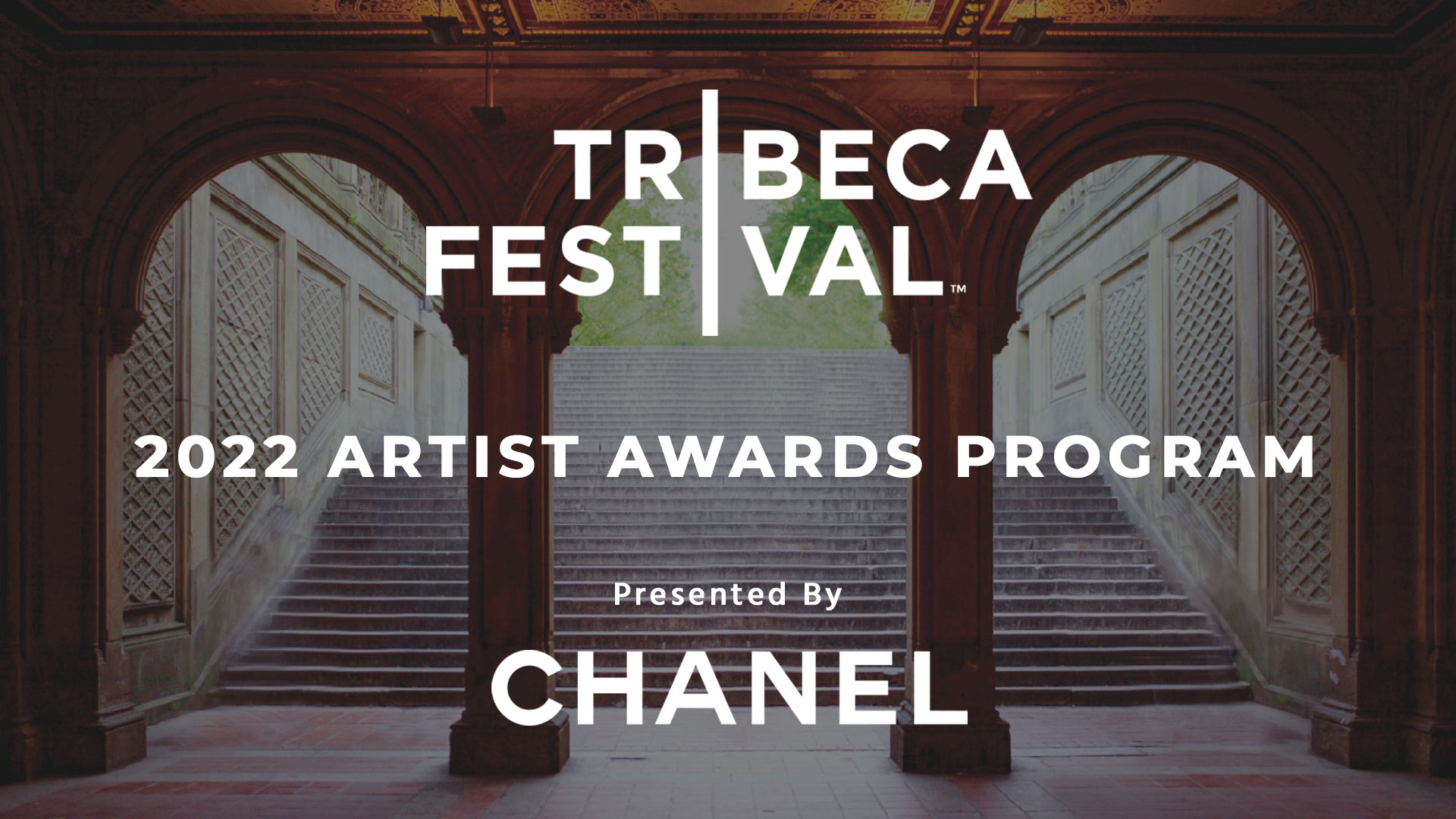 Tribeca Festival is committed to fostering creativity, cultivating visibility, and empowering our communities through storytelling. Each year, the Tribeca Festival gathers distinguished visual artists to donate artwork to winning filmmakers and to form a unique exhibition featuring the selected works. In doing so, we affirm the importance and impact of creative collaboration and recognize the intersection between art and film.

CHANEL® is honored to share in this celebration of creativity and joy with the Tribeca Festival and with all of the honored filmmakers and artists. 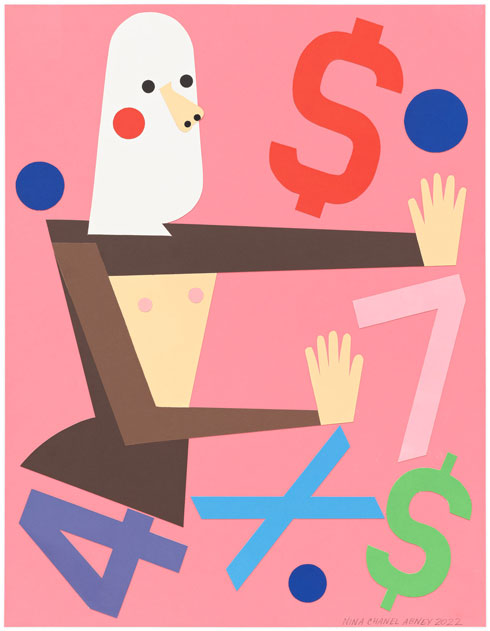 Nina Chanel Abney’s works on paper give voice to the artist’s social consciousness on a bold, "unapologetic" scale. Unified through her signature visual language of symbols and stylized figures, her prints and collages draw both subject and message from current events and society.

Abney’s first solo museum exhibition, Nina Chanel Abney: Royal Flush, curated by Marshall Price, Nancy Hanks Curator of Modern and Contemporary Art, was presented in 2017 at the Nasher Museum of Art, North Carolina. It traveled to the Chicago Cultural Center and then to Los Angeles, where it was jointly presented by the Institute of Contemporary Art, Los Angeles, and the California African American Museum. The final venue for the exhibition was the Neuberger Museum of Art, Purchase College, State University of New York. The artist has had further solo institutional presentations at the Institute of Contemporary Art, Boston, and the Contemporary, Dayton, in 2019 and 2021. Following an overseas museum début at the Palais de Tokyo in 2018, Abney has continued to exhibit across the globe, including at the Art Gallery of New South Wales in 2021-2022. She is the subject of upcoming solo exhibitions at the Gordon Parks Foundation, ICA Miami, and MoCA Cleveland. https://ninachanel.com/ 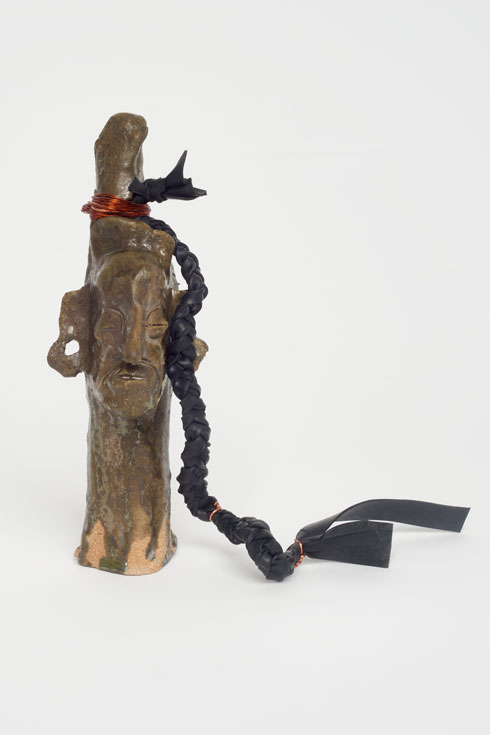 Leilah Babirye (born 1985, Kampala, Uganda) lives and works in Brooklyn, New York. She studied art at Makerere University in Kampala, Uganda (2007–10), and participated in the Fire Island Artist Residency in 2015. In 2018, she received asylum in the US with support from the African Services Committee and the NYC Anti-Violence Project and presented her first solo exhibition at Gordon Robichaux in New York. Babirye is represented by Gordon Robichaux, New York and Stephen Friedman Gallery, London.

In May 2022, Babirye will present monumental, commissioned sculptures as part of Black Atlantic, an exhibition co-curated by Hugh Hayden and Public Art Fund Curator Daniel S. Palmer, presented by the Public Art Fund in Brooklyn Bridge Park. Later this year, her work will be included in exhibitions at the Parrish Art Museum, Water Mill, NY; The Aldrich Contemporary Art Museum in Ridgefield, CT; and at mumok, Museum moderner Kunst Stiftung Ludwig Wien in Vienna, Austria. 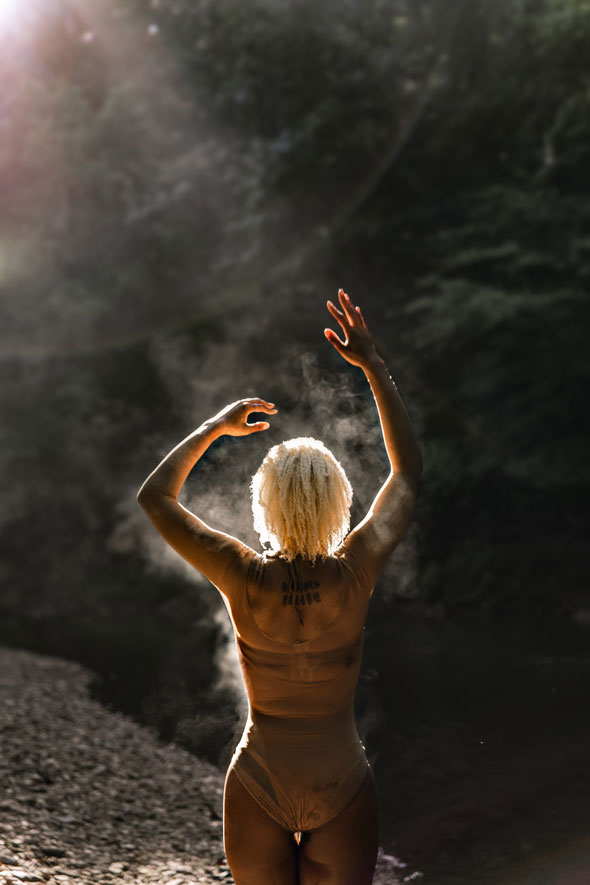 Nicoletta Darita de la Brown (b. 1981) is an award-winning interdisciplinary artist and chamána (shaman) who comes from a long line of healers. She is Black Latinx; proud to be a first-generation Panamanian born in the United States. Her artworks re-conceive the life of an artist as thriving, nourishing herself and others during and through her art practice. She teaches ‘Mindfulness in Art Practice’ at Baltimore School for the Arts; former sculpture professor at Towson University and former adjunct faculty in the MFA in Community Arts Graduate Program at Maryland Institute College of Art. Nicoletta’s performances have been presented at The Phillips Collection, Washington DC; The Smithsonian, Washington DC; Walters Art Museum, Baltimore MD. Exhibitions of Nicoletta’s film/video and installation works have been presented at Baltimore Museum of Art, Baltimore MD; IA&A at Hillyer Gallery, Washington DC; Cardinal Gallery, Baltimore MD. Nicoletta lives and works in Baltimore, MD. https://vidamagica.love/ 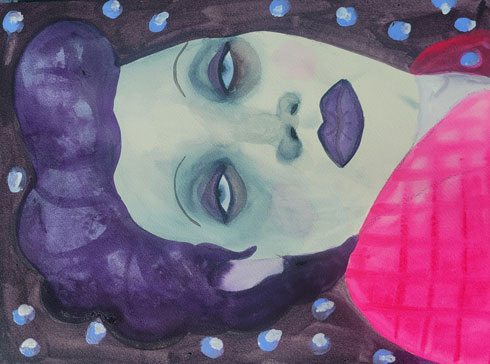 February James has been drawing since childhood. Originally from Washington DC, the artist moved to Los Angeles in 2007, and spent years moonlighting as a makeup artist while keeping up her practice. Inspired by the works of South African artist Marlene Dumas, James began to draw images of the Black figures that filled her imagination. James’s figures can be spectral in appearance, with palls of white covering their faces and dark rings circling their eyes, as though bruised or utterly exhausted. Marked by the aura of memory, James’s soulful works have appeared as cover art for Diplo, Santigold, and Lil Yachty albums. Her work has been featured in multiple group shows, including Punch, curated by Nina Chanel Abney at Jeffrey Deitch in Los Angeles and Something About Us at Anthony Gallery in Chicago. She has had solo exhibitions at Wilding Cran Gallery, Los Angeles, Tilton Gallery, New York, Monique Meloche, Chicago and Luce Gallery, Turin, Italy. The New York Times invited her to contribute watercolors to a feature article in the NY Times Style Magazine in February 2021. February James is represented by Wilding Cran Gallery, Los Angeles; Tilton Gallery, New York City; and Luce Gallery, Turin, IT. https://www.februaryjames.com/ 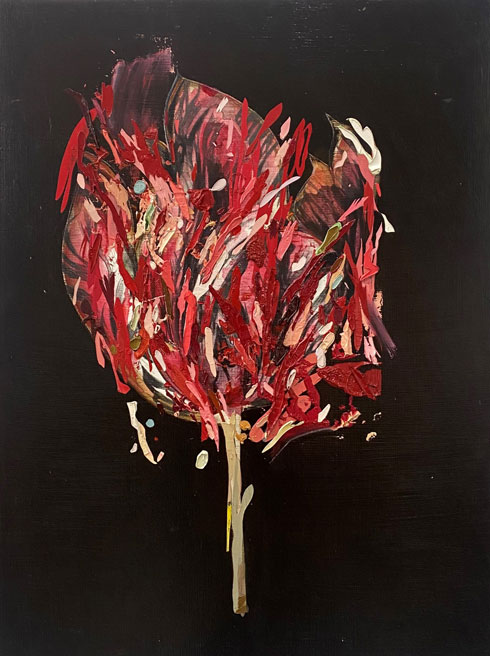 Milan’s ongoing series “Death, Wine, Revolt,” which combines photography, drawing, painting, collage, and sculpture to explore themes of over-indulgence, destruction, and revolution. While earlier series such as “Parisian Landscapes” looked inward, to personal questions of freedom and desire, Milan made the works on view in response to the turmoil of the global moment. 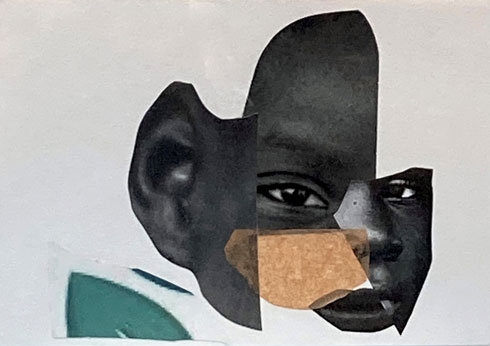 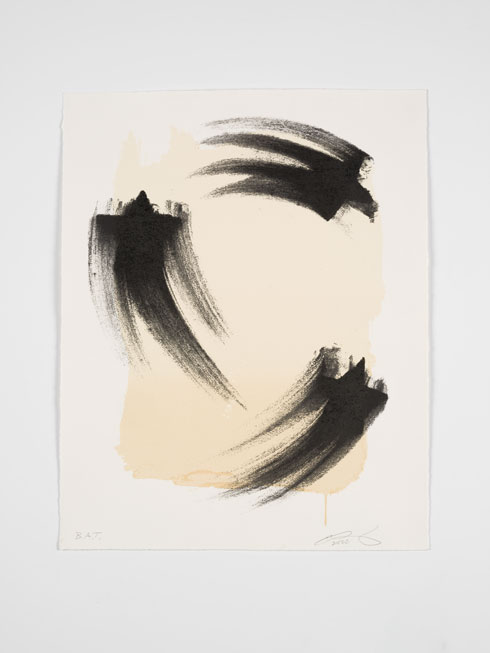 Gary Simmons was born in New York in 1964. He received his BFA from the School of Visual Arts in 1988, and his MFA from CalArts in 1990. Simmons’ multidisciplinary practice has probed American history to examine the pervasive nature of racist ideology and its manifestations in visual culture. Drawn from both personal and collective memory, his works address themes of race, identity, politics, and social inequality, and the ways in which these issues are both evident and concealed in the cultural landscape. Simmons draws iconography from a myriad of sources, including film, to reveal depths of meaning, illuminating fundamental disconnects between images and the inherent messages they embody. https://garysimmonsstudio.com/ 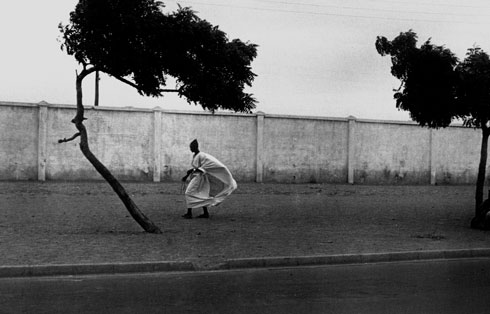 Harlem-based, Detroit-born, Ming Smith graduated from Howard University in DC. Ming Smith first became a photographer when she borrowed her mother's camera, a Brownie, to photograph her kindergarten class and has been photographing ever since. Smith would go on to be the first black woman photographer to be included in the collections of the Museum of Modern Art.

Smith’s photography focused on black-and-white street photography, a format that she described as ‘a moment in time that would never ever return again.’ Some of her favorite subjects have been Katherine Dunham, August Wilson, Nina Simone, and Gordon Parks.

Smith was recently included in ‘Soul of a Nation’ at Tate Modern. She was also featured in Brooklyn Museum’s ‘We Wanted A Revolution: Black Radical Women, 1965-85.’ Smith’s work is in the collections of MoMA, Getty, the Whitney Museum of Art, the Schomburg Center for Research in Black Culture, and the National Museum of African-American History and Culture. She continues to work. https://mingsmithstudio.com/ 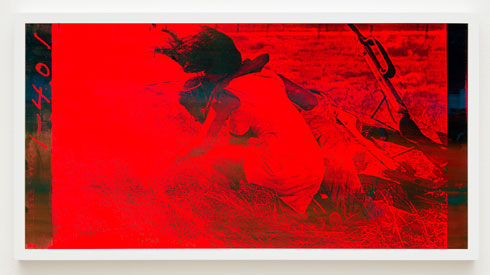 HANK WILLIS THOMAS is a conceptual artist working primarily with themes related to perspective, identity, commodity, media, and popular culture. His work is included in numerous public collections including the Museum of Modern Art in New York; Solomon R. Guggenheim Museum, New York; Whitney Museum of American Art, New York; Brooklyn Museum, New York; High Museum of Art, Atlanta, and National Gallery of Art, Washington D.C. His collaborative projects include Question Bridge: Black Males, In Search Of The Truth (The Truth Booth), Writing on the Wall, and the artist-run initiative for art and civic engagement For Freedoms, which was awarded the 2017 ICP Infinity Award for New Media and Online Platform. Thomas is also a recipient of the Gordon Parks Foundation Fellowship (2019), Guggenheim Foundation Fellowship (2018), Art For Justice Grant (2018), AIMIA | AGO Photography Prize (2017), Soros Equality Fellowship (2017), and is a former member of the New York City Public Design Commission. https://www.hankwillisthomas.com/ 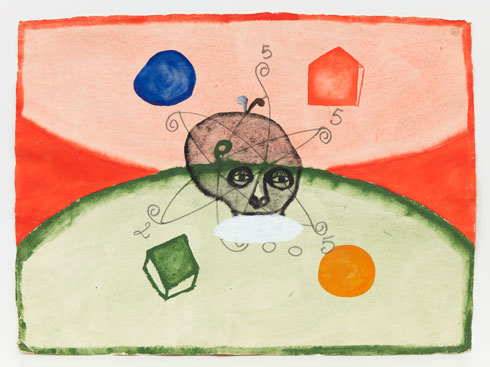 Ouattara Watts (b, 1957, Abidjan, Ivory Coast) is an American artist who uses brilliant colors, dynamic patterns, and hypnotic signs and symbols to explore the spiritual ties between people that transcend location or nationality. Watts uses a range of materials and mediums, such as textiles from around the world and hand mixed pigments, both acrylic and oil, set to a scale that ranges from large to monumental. Watts studied at L’École Nationale Supérieure des Beaux-Arts in Paris, France, before relocating to New York in 1989. His work has been exhibited at Museum of Modern Art (2021); the Whitney Biennial (2002); Documenta 11 (2002); and the Venice Biennale (1993) among others. His work is currently on display at Karma.

CHANEL is a private company and a world leader in creating, developing, manufacturing and distributing luxury products. Founded by Gabrielle Chanel at the beginning of the last century, CHANEL offers a broad range of high-end creations, including Ready-to-Wear, Leather Goods, Fashion Accessories, Eyewear, Fragrances, Makeup, Skincare, Jewelry and Watches. CHANEL is also renowned for its Haute Couture collections, presented twice yearly in Paris, and for having acquired a large number of specialized suppliers, collectively known as the Métiers d’art. CHANEL is dedicated to ultimate luxury and to the highest level of craftsmanship. It is a brand whose core values remain historically grounded on exceptional creation. As such, CHANEL promotes culture, art, creativity and “savoir-faire” throughout the world, and invests significantly in people, R&D and innovation. At the end of 2021, CHANEL employed more than 28,500 people across the world.