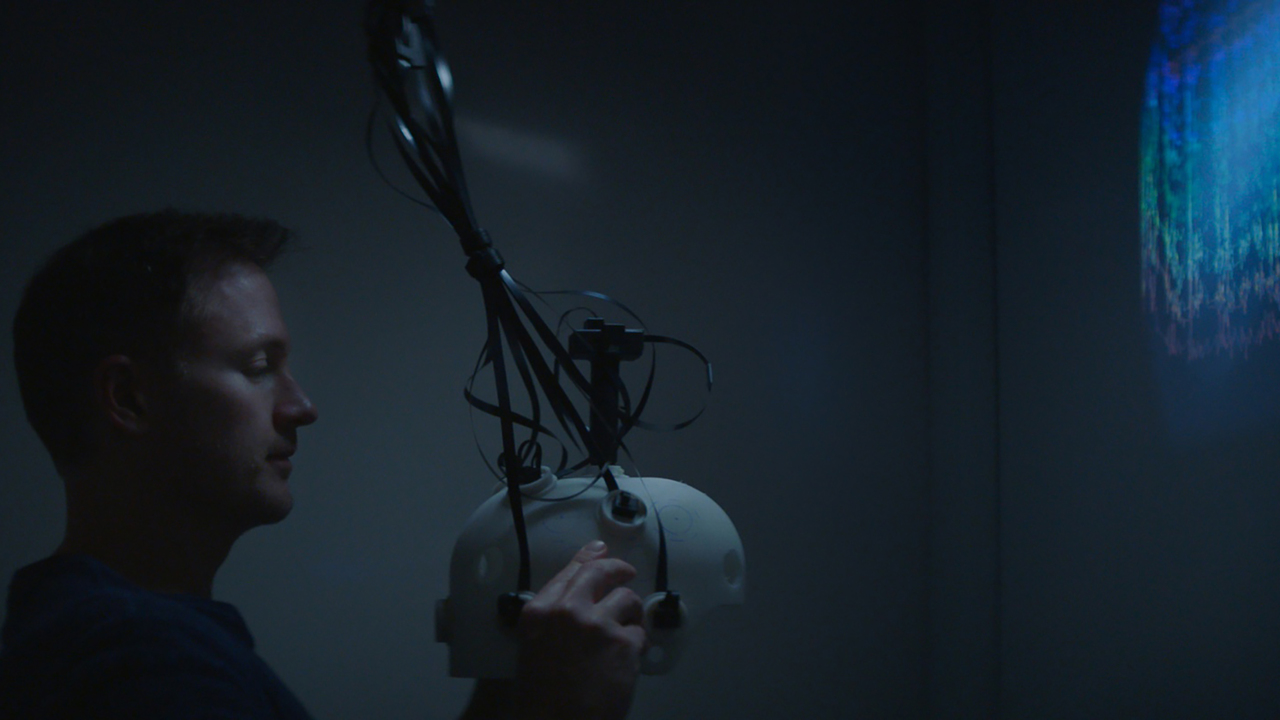 Documentary, Thriller, Science Fiction, Technology
What it means to be human will soon be drastically altered with advancements in neurotechnology, leading to an incomprehensible cohesion between man and machine. I AM HUMAN offers a glimpse of what this technical evolution entails, following three individuals with neurological disorders: one rendered tetraplegic after a bike accident, one battling Parkinson’s Disease, and one with late-onset blindness. Each subject undergoes experimental brain interface treatment, which involves direct stimulation from surgically inserted electrodes. Progress is slow but the picture is clear: as disease and disabilities fuel innovation and expanded capabilities, the ethical quandaries of a cognitive revolution are imminent.

With incredible access and thoughtful probing, filmmakers Taryn Southern and Elena Gaby unpack the complexities of this emerging field in technology. From covert government operations and questions of regulation to the philosophy behind our sense of self, I AM HUMAN charts the real world possibilities of melding artificial and human intelligence.

Bolu Ajiboye, PhD is a professor of Biomedical Engineering at Case Western Reserve University (Cleveland, OH). Bolu’s research focuses on understanding brain function in people with neurological disorders and injuries, such as spinal cord injury, and developing technology to restore lost function. Specifically, he and his colleagues develop implantable brain recording and muscle stimulating technology to allow persons with paralysis to regain natural control of movements of their arms and hands to perform normal everyday activities. His work has been featured in numerous outlets, including CNN, Time Magazine, National Public Radio, BBC, The Economist, MIT Technology Review, and others.

Elena Gaby is a Brazilian-American filmmaker, who is making her feature length directorial debut at Tribeca 2019 with the sci-fi documentary, I AM HUMAN. Elena's first short film, Paper State: Undocumented, Unafraid, Undeterred, won Best Student Documentary at the Cannes Film Festival American Pavilion in 2014. A graduate of Vassar College, Elena's other credits include docu-series and films such as Showtime's Seven Deadly Sins, CNN's The Hunt with John Walsh, Vlogumentary, and Super Size Me 2.

Nita Farahany is a leading scholar on the ethical, legal, and social implications of emerging technologies. She is a Professor of Law & Philosophy and the Founding Director of Duke Science & Society. She is widely published scholar, and a frequent commentator for national media and radio shows. She presents her work to diverse audiences including the World Economic Forum, Aspen Ideas Festival, TED, Judicial Conferences for the US Court of Appeals, the American Association for the Advancement of Science, National Academies of Science Workshops, the American Society for Political and Legal Philosophy, and by testifying before Congress.

As one of the first artists on YouTube, Taryn Southern’s work has more than 750 million views online and been featured in Vanity Fair, Wired, Fast Company, and more. In 2016, Taryn launched a production company focused on the intersection of emerging tech and storytelling. In addition to I AM HUMAN, she recently released an album composed with AI, wrote/produced an award winning immersive VR series for Google, and released a blockchain-based token enabling artists to share royalties with fans. Taryn is currently writing a book and developing a musical documentary on the sordid history of internet fame.

.Bryan Johnson is the founder of Kernel, a company building next generation, non-invasive brain interfaces, and OS Fund, a venture capital firm investing in breakthrough deep technology including biology, genomics, materials, and energy. Prior, he founded and sold Braintree/Venmo to PayPal in 2013 for $800M.

Alex is the founder of Futurism, a digital media company covering frontier science and technology with over 10 million readers across the globe. He also founded Gravity, a sleep and wellness company that features their cornerstone product, the Gravity blanket. Alex was named to Forbes 30 under 30 in 2017.