J.J. Abrams Does It Again: 10 CLOVERFIELD LANE is the Best Big-Studio Sci-Fi Film in Years

Bad Robot's latest "mystery box" release just might be the company's strongest one to date. 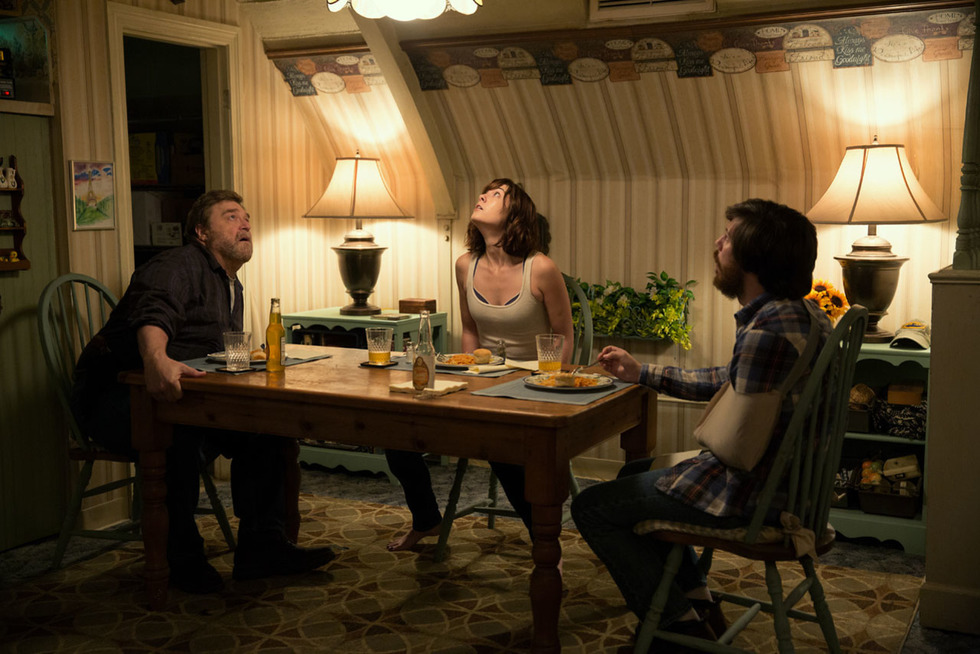 Because of its loaded title, 10 Cloverfield Lane arrives in theaters this weekend with kaiju-sized expectations. Produced by J.J. Abrams and being presented as another one of his secretive "mystery box" films, is it really a direct sequel to the 2008 found-footage gem Cloverfield, in which a Godzilla-like alien decimated Manhattan? Will the monster affectionately, though not officially, known as "Clover" make an appearance? Or is this hastily announced/released science fiction movie nothing more than the result of a shrewd post-production marketing tactic to drum up interest for something that began outside of all things Cloverfield?

Without directly answering all of those questions, let's just say this: Sci-fi thrillers don't get much better than 10 Cloverfield Lane. Its connections to Matt Reeves' Cloverfield aren't important. Unfortunately, some folks will take issue with that, but in doing so they'll undermine first-time director Dan Trachtenberg's massive achievement here.

Whereas Cloverfield used NYC's wide-open urban terrain for its expansive run-and-gun setting, 10 Cloverfield Lane is a claustrophobic chamber piece largely restricted to one location. Mary Elizabeth Winstead is terrific as Michelle, who, at the start of the film, skips town and abandons her boyfriend for undisclosed reasons; while driving away, she's violently pushed off the road by a truck, and when she wakes up, she’s a prisoner inside an underground bunker owned by Howard (a wonderfully menacing John Goodman, better than ever), a doomsday-ready survivalist who tells her that an "attack" has wiped out the world above them.

Michelle and Howard share the latter's tight quarters with Emmett (The Newsroom's John Gallagher, Jr.), Howard's associate who quickly takes to the justifiably paranoid Michelle. She suspects that their host is harboring some dark secrets, chiefly that his take on what’s happening outside is bullshit fiction. Once those pieces are established, 10 Cloverfield Lane turns into a cat-and-mouse game of wits: Is Howard telling the truth, or is he a dangerous madman?

With patience and an admirable confidence in his audience, Trachtenberg gradually builds the story's tension towards a late-game shock moment that's on par with the notorious "Are you the babysitter?" moment in the 2009 Tribeca Film Fest breakout The House of the Devil. In its early stages, 10 Cloverfield Lane is a taut and unpredictable potboiler, but after that jolting scene triggers the final act, Trachtenberg delivers the monstrous sci-fi goods in bulk. And it's all upgraded from genre-heavy thrills to legitimately first-class cinema through Winstead, Goodman, and Gallagher, Jr., but especially Winstead, a forever-underrated actress who turns Michelle into a heroine worthy of sharing iconography space with Sigourney Weaver's Ellen Ripley and Linda Hamilton's Sarah Connor. Smart, resourceful, and resilient, she's the caliber of strong female character that all movies, let alone genre entries, should feature regularly.

Winstead's and her co-stars' performances elevate this riveting three-hander to the level of a Hitchcockian stage play—that is, if "the Master of Suspense" were to come back from the dead and adapt Orson Welles' "The War of the Worlds."