Andrew Rossi’s documentary explores the intersection of fine art, high fashion, and celebrity at the Metropolitan Museum of Art and will kick off the Tribeca Film Festival’s 15th year. 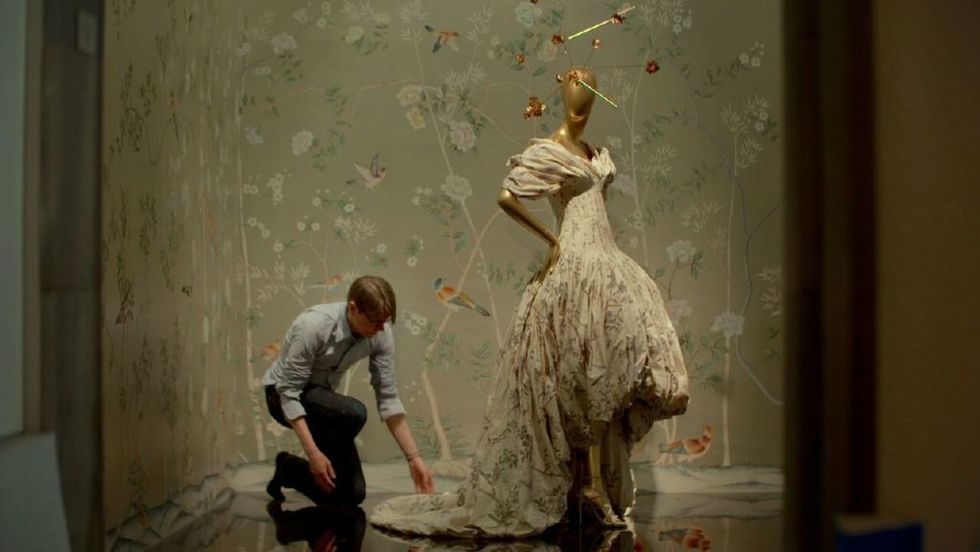 One New York institution welcomes another this year as the Tribeca Film Festival, presented by AT&T, will open our 15th year with the world premiere of Magnolia Pictures’ Metropolitan Museum of Art documentary The First Monday in May on Wednesday, April 13th.

Each year, on the first Monday in May, the Met opens its doors to the fashion world’s preeminent titans for the time-honored fundraising gala/jaw-dropping couture parade known as the Met Gala. Launched in 1948, the Met Gala aids in the preservation of the Met’s Costume Institute, a priceless collection of more than thirty-five thousand costumes and accessories that spans five continents and seven centuries of fashion. The Gala coincides with an annual Institute exhibition, whose theme is then adopted by the Gala. These themes serve as a more or less official dress code for the Gala’s guests and can range anywhere from punk or Prada to Le Belle Époque or Balenciaga — even equestrianism, as was the concept behind 1984’s Gala.

Directed by Emmy-nominated filmmaker Andrew Rossi, The First Monday in May follows Andrew Bolton, currently the Curator in Charge of the Costume Institute, and offers an intimate and all-access look at the creation of last year’s “China: Through the Looking Glass,” an exploration of China’s substantial influence on Western fashion that was the Met’s most-attended Costume Institute exhibition in history. Through this specific emphasis, Rossi’s film analyzes the fraught and fascinating interplay between the fashion world’s dueling artistic, cultural, and stylistic influences.

“The First Monday in May illuminates the debate between fine art, fashion, and pop culture and captures the creativity, passion, and visionaries behind the exhibition and gala- Andrew Bolton and Anna Wintour,” said Jane Rosenthal, co-founder of the Tribeca Film Festival and Executive Chair of Tribeca Enterprises. “It is an honor to pay tribute to a fellow New York cultural institution on our opening night.”


“It is an honor to premiere this film downtown with the Tribeca Film Festival for their fifteenth Festival and I am truly thrilled to partner again with Magnolia Pictures,” said director Andrew Rossi. “The First Monday in May celebrates creativity in art and fashion and is deeply rooted in the creative world of New York, so to launch at a Festival that came into life in order to support that culture is very meaningful. We’re so excited to have the team at Magnolia behind the film, bringing it to audiences all across the country.”

Through unprecedented event access, Rossi captures the captivating collision of high fashion and celebrity at the Met Gala, one of the biggest global fashion events co-chaired every year by Condé Nast Artistic Director and Vogue’s legendary editor-in-chief Anna Wintour. The First Day in May dives into the debate about fashion-as-art and features a cast of some of the most renowned artists in both the fashion and filmmaking fields, from illustrious cinematic stylists like Wong Kar Wai (who served as the Artistic Director of the 2015 exhibition) and Baz Luhrmann (a creative consultant for the Gala) to seminal fashion designers like Karl Lagerfeld, Jean Paul Gaultier, and John Galliano, as well as Vogue’s iconic Andre Leon Talley, former Costume Institute Curator Harold Koda, and numerous cameos from fashion and entertainment luminaries. Watch the first trailer below:

With its yearly array of entrancing silhouettes, towering headdresses, and transformative frocks, the Met Gala is essentially the industry’s largest and most lavish game of dress-up and, as such, many of fashion’s fiercest moments can be directly traced to the Gala.

Think of Cher, making her Gala debut in 1974, covered in sparkling rhinestones and marabou feathers in a flaming, peekaboo Bob Mackie dress that efficiently serves as the picture definition of “sheer.”

Or Sarah Jessica Parker and the late Alexander McQueen, wrapped, twin-like, in a sea of Scottish-red tartan in 2006.

Or Rihanna, shrugging off any inclination for restraint with DGAF aplomb and imperiously winning last year’s Gala with her dramatic, yolk-colored, fur-lined cape from Chinese designer Guo Pei. When a celebrity emerges on the red carpet of the Met Gala, there is the distinct possibility that their carefully-crafted look might become a style staple for several decades to come. The First Monday in May captures this phenomenon and dissects it with insight and ingenuity.

Produced by Fabiola Beracasa Beckman, Sylvana Ward Durrett, and Dawn Ostroff, in association with Relativity Media, Conde Nast Entertainment, Mediaweaver Entertainment, and Sarah Arison Productions, The First Monday in May will be released in theaters on April 15th.

What better way to open the fifteenth anniversary of the Tribeca Film Festival than with a cinematic look back at another of this city’s most stable and striking traditions that also doubles as a thrilling look ahead at all the stunning things to come for both Tribeca and the Met?

The Tribeca Film Festival runs from April 13th to the 24th. The full feature film slate will be announced beginning on March 2nd.

Opening night is sponsored by Farfetch with special thanks to Thakoon.