Home » Tribeca News » Point Blank: What Would You Do?
View All News

Point Blank: What Would You Do?

What if the woman you loved was suddenly at the mercy of a sadistic band of criminals? Check out Fred Cavayé's adrenaline-fueled thrill ride through the streets and subways of Paris. 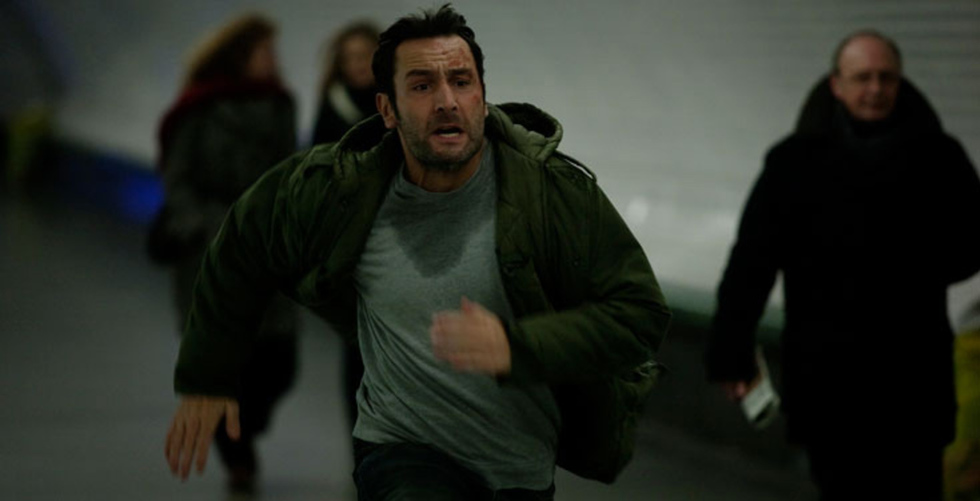 Say you’re an ordinary guy, going through your ordinary day, when suddenly your pregnant wife is in danger and you’re at the mercy of a band of feuding gangsters. What would you do to protect the one you love? Throw in a squad of cops who may or may not be on the right side of the law, and you’ve got the simple scenario that is the premise of Fred Cavayé’s second feature, Point Blank (TFF 2011). Cavayé’s breakneck thriller takes the viewer on an adrenaline-fueled ride through the streets of Paris, and stars newly-minted French star Gilles Lellouche as our Everyman Samuel; the charismatic Roschdy Zem as the menacing criminal Sartet; and the magnetic Elena Anaya as the mother-to-be Nadia. We recently caught up with Cavayé on the eve of Point Blank’s U.S. release.

Tribeca: What inspired you to tell this story? How did the idea come to you?Fred Cavayé: It actually sort of builds on my first film. In the last half-hour, my first film had one of these very tense sequences where everyone—including the viewer—was very much involved. So I decided to expand it: in this case we have a film that’s 90 minutes long in which someone who would normally take time to think before he acts has no time to think before he acts. He moves immediately from thinking to acting. I wanted a film that would be very entertaining, and also one that would really grab the spectator, make them feel like they were part of it.Tribeca: It certainly does that. Does an Everyman being caught up in a thriller excite you more than, say, a CIA agent in danger?Fred Cavayé: Yes, I think it’s really important for the viewer to identify with the main character, and I think it’s also easier to really identify with someone who’s ordinary—with a nurse more than, say, a CIA agent. And I think making him an ordinary person also adds a human dimension that’s very important, because then the viewer has two times the fear when they are watching, wondering what’s going to happen to the character. To be an entertaining film, that’s all part of it.

Tribeca: You played with gender roles in this film, somewhat, by having the protagonist be a nurse, and depicting very strong female police officers. Can you just talk a little bit about that?Fred Cavayé: I’m very interested in this question of role reversal, and what does it do then for the plot? So often I will write a role for a man, and then I think: What would it be like to give this role to a woman? I think it’s particularly interesting with the bad characters—because say you have a villain who’s played by a man, it’s mainly a physical kind of thing, whereas if the villain is then transformed into a role played by a woman, it adds another dimension to it, a psychological dimension.For example, in this film, you have a woman cop who has to kill a pregnant woman—now if it were a man who were going to do that, it would have a totally different connotation than having a woman do it, on a psychological level. When we first cast the film, it was a man, but I asked my producers if we could get more women, and that’s how I really discovered the actress Valérie Dashwood, who played this really terrifying character.Tribeca: She was terrifying, and having her be a woman made her actions so much more shocking. Maybe next time you will have a female gangster lead. That would be cool.Fred Cavayé: Perhaps instead of a female gangster, a female hero! At the moment I am working on a number of screenplays, and in one of them, the main character is a woman, and it’s the woman who has to fight to save the person she loves.

Tribeca: I like that idea. Speaking of changes, how much did the script change during production, once you realized what it would mean to actualize your ideas? There is so much action—was it different in your head from when you actually went into production?Fred Cavayé: No, it actually stayed pretty much the same. To make this kind of film, you have to keep the technological aspects of it in mind when you are writing the screenplay. For example, I like to use natural sets—I used the real subway, train stations, highways—so it’s really something I have to take into consideration while I’m writing the script, because it’s potentially going to be a problem down the line if I don’t. So really the only thing that changes are the details.

Tribeca: What’s it like to film action scenes on the streets and subways of Paris? Are Parisians like New Yorkers: do they just get irritated? Or are they fascinated by seeing a movie being filmed? Fred Cavayé: Actually, no, the Parisians react pretty much the same way that New Yorkers do. They are annoyed—the streets are blocked, the roads are blocked, they can’t travel—so I think it’s probably the same reaction. And it’s rather complicated to shoot, for example, in Paris, because you need authorizations in order to be able to do everything, so there’s really no room for improvisation here. Everything really has to be anticipated and thought through before you begin the shooting. So for example, in the shots in the subway—all the people you see there are extras; they are not just people in the background. When we shot in the Metro, we shot in the hours that the Metro is closed, which is between 1 am and 5 am.Tribeca: In New York, our subways never close, so there is not that option.Fred Cavayé: So the next film I’m going to shoot in New York! [laughs]

Tribeca: Can you talk about your cast? They were all fantastic. Gilles Lellouche is just perfect, and Elena Anaya is mesmerizing—I remember her from Mesrine, and from the Almodovar films. And Roschdy Zem as the gangster… Can you talk about putting your cast together?Fred Cavayé: When I was writing in the beginning, I was envisioning Roschdy in the role of the nurse, but as I continued to write it, I realized that he would be much better as the gangster. This is the gangster who doesn’t really speak very much; he has very little dialogue. Roschdy has a great kind of charisma, which would really convey that look of a sphinx-like character. So when I told him I had initially thought of him to play the nurse, he said he was glad I had changed my mind—he said wouldn’t have accepted, that he really preferred to play the role of the gangster.For Gilles—there really aren’t a lot of actors of his age and type. I didn’t have a whole lot to choose from—maybe only 4-5 I could think of—but he was really my first choice. And what’s interesting about him is that he really looks just like an ordinary person, but he’s also physically very well built and ready, and he was able to do all the physical work that needed to be done in this film. So I thought he was an excellent choice, and I’m very pleased that this was his first major role: the film was a big success in France, and now he’s getting more major parts because of it.

I wanted Elena Anaya from the start. I think she’s a fabulous actress. And it was very important for me that the actress playing this part was able to convey the sensuality of the character. She only has that one scene at the beginning where she has to make the audience fall in love with her, so that the audience will then understand why the husband goes to these great lengths to rescue her. Elena was totally my first choice, and I think she was an excellent one. But I think the cast, all around, was really wonderful for a director.Tribeca: How was your experience having a film remade in America? Your last film, Anything for Her, was turned into The Next Three Days. How were you involved? Do you hope it happens again, or are you done with Hollywood?Fred Cavayé: Actually, my involvement in the remake was really very reduced. Although I spoke with the director and the screenwriter, I didn’t want to participate actively in the rewriting of the script. I think it’s truly important for the writer of the remake to have his own reinterpretation of the characters. I wrote the original screenplay, I filmed it, and that was my interpretation; that was how I saw the story and the characters. But for the remake, the scriptwriter and the director really need to retell the story from their point of view and in their own way.As far as this film, I am waiting for the remake. And I would be very interested to see what happens with it. But what I think is a very interesting thing is that I was very, very influenced by American film. So for me [the remake is] like coming full circle, because here I was influenced by this type of American film, and I made this French film, and now my French film is being remade as an American film…

Tribeca: What American directors have influenced you? Which directors are you a fan of?Fred Cavayé: Of course I was influenced by a lot of American filmmaking, but for me the major one was The Godfather, which is really the bible of that type of film. I have also seen and really like a lot of the newer films, the newer generation of directors—for example, James Gray, who I think is really a wonderful director.The thing is, I have just as much influence from French films. I think that my filmmaking is really a good combination of something like a Claude Sautet film plus the Jason Bourne trilogy; it’s really a good mix.Tribeca: It really does translate very well. I watched this with my husband, who loves action movies but isn’t a big fan of subtitles—and he was riveted. So thanks for opening his mind a bit!