As we approach the 10th anniversary of September 11, find inspiration in Scott Rettberg and Megan Sleeper’s documentary: in theaters, on TV, and streaming live. How can you pay it forward? 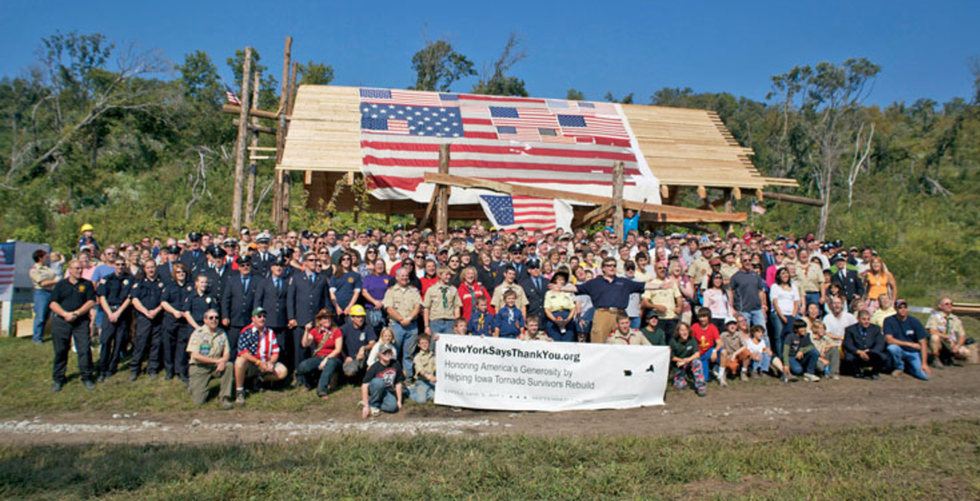 New York Says Thank You is a documentary feature film, brought to you by director/producer Scott Rettberg, producer Megan Sleeper, and executive producers Jonathan Tisch, Jeffrey Stewart, Leonello Savo, Jr., and SF Foundation. The film is set to hit theaters, make its television debut on FOX-owned MyNetworkTV affiliates, and stream on AOL worldwide the week of September 11, 2011. We asked Rettberg and Sleeper to share more of the story with us.

On a farm in the small town of Groesbeck, TX, lives an incredibly generous, giving family, the Vincents. The Vincent family, which comprises 75% of the Groesbeck Volunteer Fire Department, has housed and cared for disabled veterans for three generations. They have even named their land “Vincentville.”

On December 29, 2006, a deadly tornado ripped through Groesbeck, TX, destroying James and Eva Vincent’s home… the home that housed their young son, Hunter, and the disabled veterans they cared for.On the 2007 anniversary of September 11, a New York father, Jeff Parness, and his young son, Evan, gathered a group of New York firefighters, Ground Zero construction superintendent Charlie Vitchers, and other New York survivors of 9/11 and headed to Texas. These volunteers brought their hammers, hearts and hope.Groesbeck didn’t know what hit them when the New Yorkers arrived. Accustomed to devoting their lives to helping others, the Vincents had to adjust, as New Yorkers and volunteers from across the country came to their aid. At the end of that anniversary weekend, the New Yorkers left behind a beautiful new home for the Vincents and a great deal of love, support and friendship. The Vincents’ lives were forever changed.

The Vincents and Groesbeck, TX, are just one example of the many communities touched by the New York Says Thank You Foundation. The NYSTY spirit is contagious. Each year, the Vincents—and members of other communities helped in previous years—travel on the 9/11 anniversary to join the New Yorkers in honoring those lives lost on 9/11. Together, they pay forward the help they received from volunteers from across the country during their time of need.The Vincent family, along with disaster survivors from around our nation, joined New York firefighters on the red carpet this past April for the Tribeca Film Festival premiere of New York Says Thank You. It was impossible to miss the Texans in their cowboy boots walking the streets of New York during their trip to the big city. And no doubt, the Vincent family will be crowding around the family television in Groesbeck as the feature documentary New York Says Thank You makes its television debut on the weekend of the 10th anniversary of September 11.As filmmakers, it has been our honor to be a part of the New York Says Thank You family. For five years, we traveled the country with the Foundation filming the many lives touched by the beauty and the camaraderie of this organization. Through the camera lens, we are honored to share with the world the idea that perhaps the greatest healing is achieved through the simple act of helping others.

Born and raised in Los Angeles, director/producer Scott Rettberg has made it his calling to see projects emphasize quality from concept to delivery for more than 10 years. Working in both film and television, he has been an essential branch of the films Bled, Ascension Day, and the award-winning independent short Cooking with Cannibals. New York Says Thank You is Scott’s directorial debut. Scott hopes the film will enlighten people to the power of reaching out to help those in need and how a simple act of kindness can snowball into a massive unified effort.

Producer Megan Sleeper has extensive experience in film, television, and theatre, specializing in on-camera interview technique, casting, production, direction, and departmental management. Sleeper has worked in Los Angeles producing her own projects, and for the past nine years she’s worked at Bunim-Murray Productions, acclaimed producers of HBO’s Emmy Award-winning documentary film Autism: The Musical and Tribeca’s 2009 film Shadow Billionaire. Working in both documentaries and reality television has enabled Sleeper to push the creative edge, generating raw emotion and showcasing the truth of humanity through her skilled on-camera interviews and storytelling.

See New York Says Thank You on the following dates: