Filmmaker Tiffany Shlain talks cloudsourcing creativity and giving back in the age of collaboration. 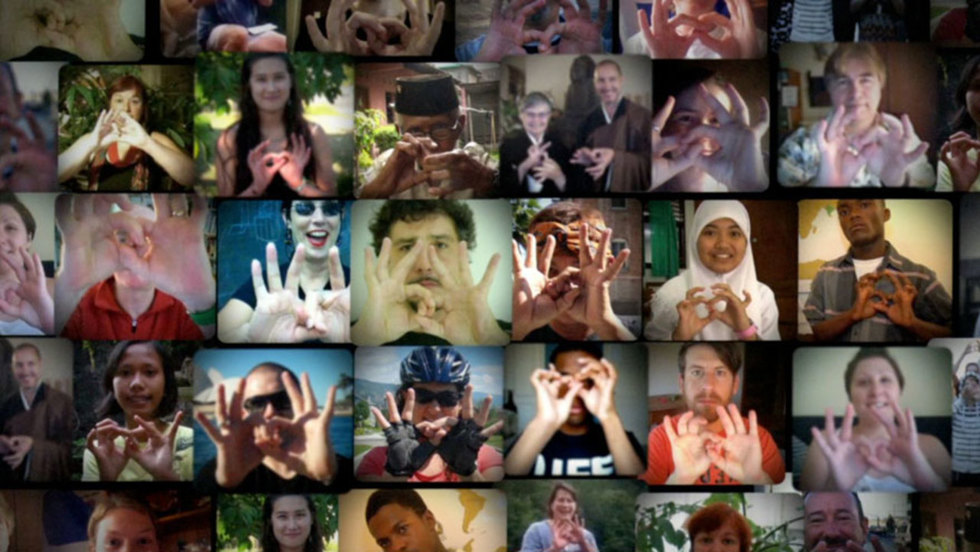 When YouTube first came out, I had a vivid dream that all the videos were in HD quality and had easy pull-down menus that explained how I could license the footage. I was like a kid in a candy store.

As a filmmaker who hardly shoots anything and is primarily into remixing and recontextualizing images, this explosion of online video was not only a much bigger candy store than I had ever dreamed of, it also completely changed the way I make films. The new tools and technologies that enable video sharing have allowed me and my team at The Moxie Institute to embark on a whole new adventure that we call CLOUD FILMMAKING.

Let me rewind. My filmmaking style of remixing came out of necessity. When I was a film theory student at UC Berkeley in the early 1990s, there were no film production facilities. None. The only way I learned to tell stories on film was by re-cutting and splicing together celluloid of old B&W movies, early animated films, home films, sound slug, or anything I could get my hands on. The idea of recontextualizing images from different eras to express larger ideas about modern times was very exciting to me.

That archival aesthetic is the foundation of my filmmaking style. Most of our feature documentary CONNECTED: An AutoblogograPhy about Love, Death & Technology, is comprised of a combination of archival images from many eras sewn together with new original animations, in my attempt to understand our world, where we came from, and where we’re headed.

For most films, one of the biggest line items is the cost of shooting, but ours is licensing footage and creating animation. Unlike in college where I found footage in dusty old closets, today with the Internet, not only can I search for film and video images solely online, but with so many people having access to cameras and footage, and with the increased use of YouTube (more than 2 days worth of video is uploaded every minute), it’s an ever growing moveable visual feast of delicacies from all over around the world.

This inspired me to create a new short film series that leverages the creativity of individuals and organizations from across the globe. The series is titled Let it Ripple: Mobile Films for Global Change.

The first film in this series, A DECLARATION OF INTERDEPENDENCE, picks up where CONNECTED left off.

The last section of CONNECTED featured a scene we call “the participatory revolution.” With 5 billion cell phones and 2 billion people online, the film asks, “what is the potential when everyone on the planet who wants to be online has access to the Internet?” The last line of the film states, “For centuries we’ve declared our independence. Perhaps it’s now time we declare our interdependence.” In responding to this last line of the film, we launched our foray into Cloud Filmmaking.

To create A DECLARATION OF INTERDEPENDENCE, we first rewrote the U.S. Declaration of Independence to be a “Declaration of Interdependence,” and on July 4, 2011 we posted it on the Internet. We then asked people through social media either to video themselves reading the script, or to submit artwork that represented ideas in the script. Videos and art submissions poured in from all over the world, in all different languages. The experiment was not only working, it was bigger than we imagined. We edited everything together with music by Moby, and what resulted was a four minute film, a global mash-up demonstrating the vast potential of creative collaboration in the 21st century. An example of “the participatory revolution” in action.

What was so powerful for us was that we were no longer divided simply as filmmaker and audience, or creators and receivers. With Cloud Filmmaking, we were collaborating on the film as one. Although I still directed the finished piece and the others were working from our script, I was working with footage that people shot and sent from all over the world, many of whom I don’t know and will never meet. Nonetheless, we were all invested in seeing the film happen and the final message.

Since so much about the creation of the film was new and different, we also wanted to find a different way to premiere it. We decided to do a simultaneous online and live premiere -- YouTube selected it to be featured on their homepage on the same day that it would premiere live in New York City for Interdependence Day. I remember being in a taxi in NYC when I saw YouTube feature it... it actually happened around an hour before the live premiere. So there I was, having that magical adrenaline-pumping “premiere” moment holding my iPhone with a sweaty nervous hand as I bumped over pot holes in the taxi racing to get to the theater where the “live” premiere would be. It felt like a space-time-cinema shift.

Then this other cool thing started to happen. We used social media to ask the world to help us translate this collaboratively-created message of interdependence. And using the cloud, people from all over the world, from every continent, volunteered to translate it.

The film has now been volunteer-translated into 65 languages.

A few months after the film’s launch, we launched the next phase of Cloud Filmmaking — giving back. We started offering free customized versions of the film for nonprofits and organizations all over the world. We work with them to craft a custom “call to action” then replace our “call to action” with theirs. They can then use their customized version of “A Declaration of Interdependence” to help activate and inspire their base, spread their message, drive fundraising, and support other goals and initiatives. Because the film has been translated into so many languages, its potential is limitless. In the first four months, we’ve already made 80 of these free versions of the film for organizations.

If you work with a nonprofit organization that strives to make the world a better place, we would love to make a free customized four minute version for you. You can learn more and see examples of the amazing range of participating organizations here.

Now, we are taking Cloud Filmmaking to a mobile app. In the coming weeks, we will release the free CONNECTED app for iPhone, android and iPad that will add even more tools to the collective toolbox of participation for both CONNECTED and the LET IT RIPPLE series. This free mobile app has built-in recording so that you can participate by contributing to the next film, sharing your stories about using the films or about interdependence, or your ideas on the “participatory revolution.”

The app also includes a regularly updated database of research and posts about “connectedness in the 21st century,” information on how to host a screening, and instructions on how to use interactive discussion tools where both the host and the audience can engage with the research, conversation cards, and discussion book before and after the film. You can also license our Educator’s Edition and receive both printed materials for the class and the mobile app to engage, participate, and give back. The app is yet another way of redefining the relationship between the creator and the receiver. Cloud Filmmaking is about everyone participating.

We are now embarking on production of our second film in the Let it Ripple series. The film is called “Brain Power,” and it is based on exciting research from Harvard, University of Washington, and UCBerkeley on how to best nurture a young child’s brain. Based on this research, we looked at the parallels between nurturing the growth of the brain and nurturing the growth of the Internet —the global brain that is enabling the participatory revolution to happen. People have sent us many videos and art contributions and you can too.

Over the next four years we will make 20 of these short films, evolving the way we collaborate with people and organizations.

I think when they look back on this period of time, it will be called “The Age of Collaboration.” People around the world are able to share strategies when catastrophe strikes; scientists are opening up problems to gamers to solve previously unsolvable problems, and artists and inventors can gather groups of supporters to help them fund their projects. My team at The Moxie Institute and I are cloudsourcing creativity to tell collaborative, universal stories that can be used by organizations all over the world.

Today, with more people than ever having a camera in their phone, the possibilities keep expanding for people to tell their stories. I love when Apple added a second camera to the front of the phone so people can now film themselves with ease, removing any mediation between people recording their ideas and stories.

We ultimately are a species of storytellers. This is how we share, empathize and learn. Now that so many people can record their story effortlessly, filmmaking feels a whole lot lighter and has a movement both in its creation and its dissemination that feels like clouds blowing in the sky. Great circulation that allows you to breath more deeply, more creatively, more collaboratively.

by Tiffany Shlain & The Moxie Institute

The 5 Principles of Cloud Filmmaking

1. To use the cloud to collaboratively create films with people from all over the world.

2. To create films about ideas that speak to the most universal qualities of human life, focusing on what connects us, rather than what divides us.

3. To give back as much as is received, by offering free customized films to organizations around the world to further their message.

4. To use the cloud to translate films into as many languages as possible.

5. To push the boundaries of both filmmaking and distribution by combining the newest collaborative tools available online with the potential of all the people in the world.