"I tend to get in trouble when I talk about this..." Highlights from our lively Future of Film conversation with Sorkin and presidential speechwriter Jon Favreau. 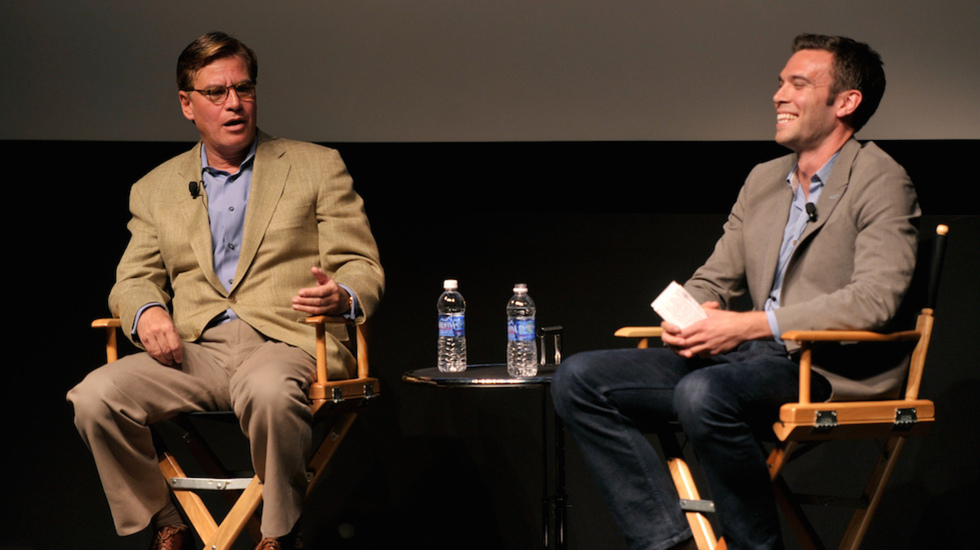 What would modern day Washington DC be without former Chief Presidential Speechwriter Jon Favreau and writer Aaron Sorkin? A rabble of navy blue potato sack suits, selfies, and stalled legislation? Favreau and Sorkin are two men who have rewritten the American political narrative for the twenty-first century, creating heroes for a generation. Last night to kick off the first ever Tribeca Film Festival Innovation Week, Mr. Favreau sat down to interview Mr. Sorkin about storytelling's past, present, and future.

Mr. Favreau kicked off the conversation by citing Mr. Sorkin as one of his own heroes, a sentiment shared by many young Washingtonians. (It’s well-documented that The West Wing inspired an influx of college graduates to the political fray, even years after the series left the air.) Expounding upon what his definition of what a hero is, Mr. Sorkin said, “I’m not interested in the difference between good and bad, I’m interested in the differences between good and great.”

Mr. Sorkin described his own type of everyman, “A guy who does his job competently but not well, a guy who’s very likable but there is something stopping him from doing something great.” Mr. Favreau asked about what initially compelled Mr. Sorkin to write. Mr. Sorkin cited a black and white photograph taken after a performance of Death of a Salesman in 1949, during the play’s original Broadway run. “…Flowing out of the Morosco Theatre are a sea of businessmen with their shoulders slumped, they’re looking down, they’re all headed to a bar across the street. What’s really remarkable about this photo is that it’s [taken after] a Wednesday matinee. Word had gotten out of what this play was and what it was doing to people; businessman did not want to cry in front of their families, so they were calling in sick to work and going to the matinee by themselves. That’s the power of storytelling.”

Turning the conversation to the present state of the story, the pair spoke of America's fascination with the post-Tony Soprano era anti-hero, a trope that Sorkin finds to be deeply troubling. “I have a hard time with bad guys,” he admitted. When discussing ‘good’ and ‘bad’ in his own work, he said, “Almost as soon as I write a bad guy, I start moving him toward becoming a good one.” Sorkin played this admission off with an appealing humility, as if there was some element of modern character development that had eclipsed him (“I could never write an episode of Breaking Bad”), but the answer left his audience wondering about what the current, anti-hero-worshipping culture sacrifices.

"We now have a relationship with the truth that borders on indifference.”

Those of us in the audience lucky enough to have grown up with the polished banter of Aaron Sorkin characters, wishing our own exchanges with friends were as verbally adroit (From The American President, “Sydney, the man is the leader of the free world. He's brilliant, funny, handsome. He's an above-average dancer. Isn't it possible our standards are just a tad high?”) speculated at what we’d extrapolate from Frank Underwood in place of Andrew Shepherd.

Addressing the same topic from another vantage point, Mr. Sorkin cited a recent news item about teenager who tweeted a bomb threat to American Airlines, a gesture she had of course intended as a prank. After airline officials scared the life out of the girl with a fast, stern response, a moderate level of media pickup ultimately rewarded her with 20,000 brand new Twitter followers: momentary internet fame. (Note: This Twitter account has since been suspended.) Of this story arc, Sorkin said, “Sarah has been taught a terrible lesson, and I feel like we’re to blame. There [were] grownups in Sarah’s 20,000 followers. We now have a relationship with the truth that borders on indifference.”

“Film doesn’t have to worry. Movies are awesome. There’s no war going on, theaters aren’t going to lose.”

Of The Newsroom, Sorkin’s HBO series currently filming its third season in Los Angeles, he said, “Today is my first day ever of not being on the set of anything I’ve written, and I just hate it.” After asking the audience to stand in for, well, everyone in world, Mr. Sorkin then spoke as his series, stating, “I think that you and I got off in the wrong foot, and I apologize. I’d like to start over.” Every opportunity that the writer found to make a joke at his own expense was utilized; Mr. Sorkin presented himself as nothing more than a romantic who wants his heroes to own up to their full potential.

When the conversation moved to the future of storytelling and a major behavioral agent of change in Hollywood — the binge watch — Mr. Favreau asked if Mr. Sorkin felt that our new, long-form viewership style is a threat to the traditional film. Mr. Sorkin’s initial reaction was blase. “Film doesn’t have to worry. Movies are awesome. There’s no war going on, theaters aren’t going to lose.”

Later when the questions were handed over the the audience, a college student broached the subject of the binge watch again, positing that a viewer’s newfound ability to move directly from watching a season finale to the next season’s premiere might alter the way that a story sits, or resonates. Sorkin paused for a moment, made a joke, and then noted that he’d think about the question all night. Though his audience was won over with the heartfelt admission of uncertainty, Sorkin was not satisfied with his wording. Searching the audience with a hand over his eyes, he confirmed that his assistant was in the crowd and then re-addressed the young man. “Behind you is my assistant,” he said, “And if you give her your email, I will write you back tonight with a better answer to your question.”

And therein lies Hollywood’s hope for the future — its top writer is one class act.

Jess Kimball Leslie is a trend spotter in New York who writes for us frequently about The Future.