The year's only bro-comedy worth seeing comes from a female director. 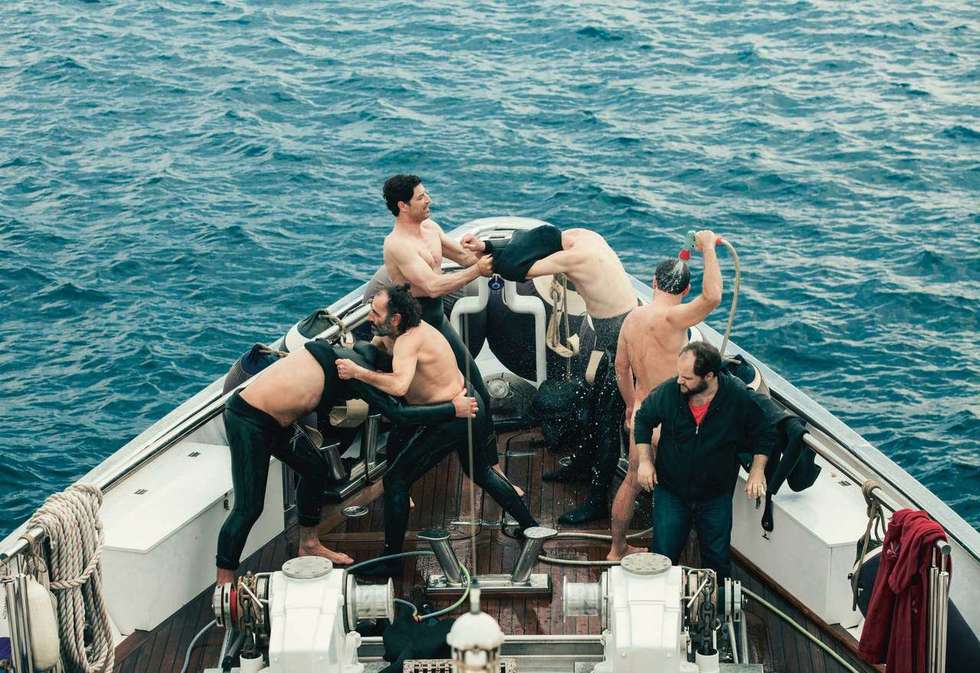 After imaginatively deconstructing the nervy bond between two unusual high school girls in her 2010 surrealist coming-of-age comedy and arthouse breakthrough Attenberg, Greek writer-director Athina Rachel Tsangari has turned her attentions towards the opposite sex, with equal wit and weirdness.

Tsangari returns with Chevalier, a Mediterranean behavioral study masquerading as buddy movie in which six vacationing male friends (played by Panos Koronis, Attenberg's father Vangelis Mourikis, Giros Pyrpassopoulos, and Greek pop king Sakis Rouvas, among others) vie for the dubious title of “Best in General” while stuck together on a luxury yacht bound for Athens. Gourmet dinners, tone-deaf musical performances, and (literal) manhood-measuring ensue as scores as dutifully scribbled-down in personal notebooks that become like extra appendages as the rivalries flare up.

Tsangari, a mainstay in contemporary Greek cinema who has produced Yorgos Lanthimos’ Dogtooth and Alps and served as the Film Society of Lincoln Center’s 2015 helmer-in-residence, sends up the male ego with a cheerful edge and delicate lensing, honoring the inanity of this impromptu contest with a straight face and a stealthy deadpan that is as engagingly implicative as it is genuinely funny and informally endearing.

Like Judd Apatow's spirited but usually uneven depictions of his signature lackadaisical schlubs, the writer in Tsangari can't hide the warm and undeniable affection she possesses for these men, in spite of all their faults and vanities. But Tsangari is also an acute and subtle satirist, who knows that affection for one's characters isn't an end in itself. She never strives for any clear-cut message nor takes any broad comedic lunges, but instead keeps Chevalier balanced on a thin line between sensible truth-telling and the cheekily absurd, a niftier and trickier achievement than might immediately be apparent.

In doing so, she has made Chevalier into a raffish and intelligent divertissement with one of the year's most applaudably in-sync ensembles. Chevalier is also probably the only Grecian comedy you'll see this year in which a guileless grown-man (Makis Papadimitriou, in a role that will surely be filled by Zach Galifianakis in the remake) lip-syncs a choreographed rendition of Minnie Riperton's silky classic "Lovin' You," a scene that wouldn't be entirely out of place in something like The Hangover, with its underwritten wolfpack and their shabby grab-bags of random comic shenanigans. In Chevalier, this bizarre performance instantly becomes one of the film's most glowing moments, a charmer that originates not from an instinct to laugh at the character but to actually honor his incredibly unorthodox specificity.

It’s tempting—but misleading—to tag Chevalier as some stranger, international answer to The Hangover. If anything, Chevalier is a Hangover with a brain, a heart, and a voice, whose owner is eager and able to dismantle the modern-day man-child once and for all.