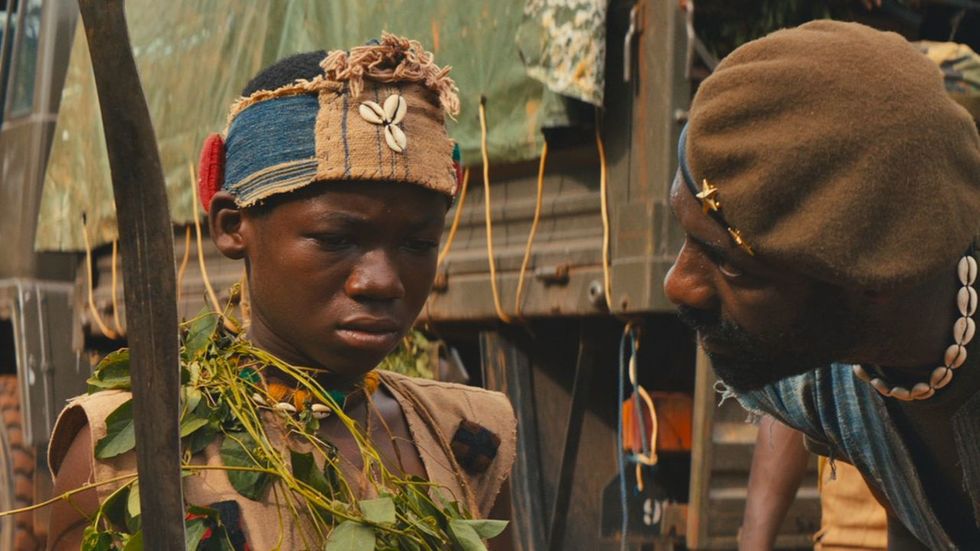 So much has been said about Cary Fukunaga's ability to shoot the hell out of an intense situation. That mostly stems from his virtuosic work on HBO's True Detective, and it'll continue now that his latest film, Beasts of No Nation, is finally opening in a limited number of theaters and widely on Netflix, making it the online streaming service’s inaugural foray into original movie production and releasing.

There's another Fukunaga one-take tracking shot special in Beasts of No Nation, with the director following his protagonist, 11-year-old child soldier Agu (first-time actor Abraham Attah), through a rundown apartment building in an unnamed African country as he and his gun-toting peers clear the premises out while raping and pillaging its powerless inhabitants. But Beasts of No Nation’s most impressive visual is devoid of action, or behind-the-camera trickery: Agu and two of his fellow soldiers are sitting beneath a truck to hide from the rain, mere inches away from a flowing river of blood-drenched water. The shot encapsulates the film so amazingly that it could’ve been used for the official poster.

Beasts of No Nation puts the grotesque realities of war right in the viewer's face. Little kids drive machetes into crying adults’ heads and shoot women while they're being raped. It's no wonder that Fukunaga's film could only receive distribution from Netflix—not even universal heartthrob Idris Elba's presence can soften its massive blows. In fact, he’s the one administering most of its blows. Elba, the film's only recognizable face, plays the Commandant, the children’s stern, take-no-prisoners leader who makes them ingest hallucinogenic drugs and sexually violates the ones he likes best, namely Agu. In a towering performance, Elba downplays the Commandant’s malevolent nature; he coolly embodies the character's explosiveness and delivers his forceful speeches with a measured confidence. In the Commandant's mind, he's the shit.

In Agu's eyes, the Commandant is the monster he's stuck with. Fukunaga captures Beasts of No Nation's grisliness through Agu's point-of-view, which drives home the film's anti-war impact. Attah’s remarkable performance grounds it in heartfelt realism. Over two visceral hours, you see the gradual decimation of a child’s heart and soul, piece by piece, caused by combat; Attah's soft-spoken yet emotional narration accentuates every soul-crushing moment, at one point, during a burst of one-sided destruction, asking, "God, are you watching what we are doing?" This could have been Apocalypse Now starring a kid, but Fukunaga's optimism-sprinkled script and Attah steer it away from wallowing in defeat. When the 14-year-old actor sits near that aforementioned bloody rain, he's the center of attention. You barely even notice the red life-liquid surrounding him.