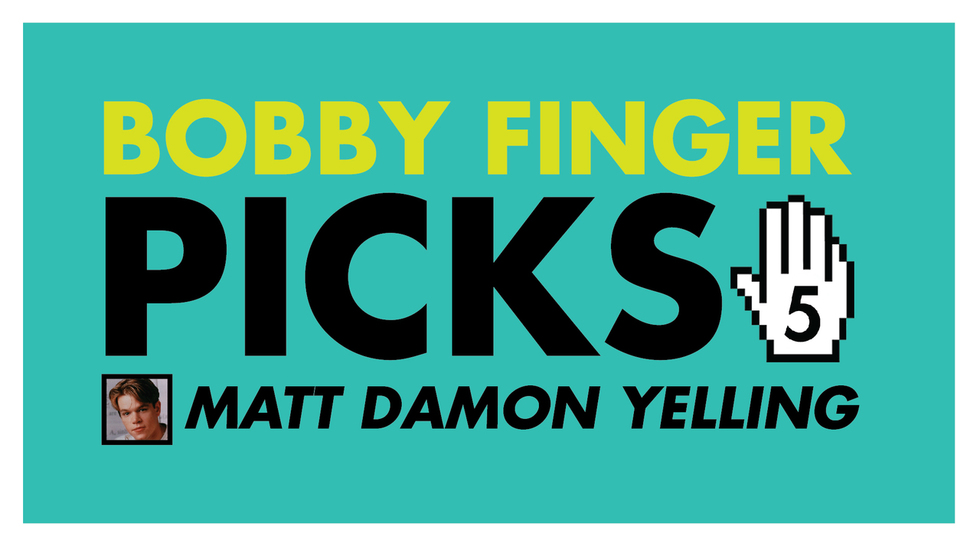 He’s Good Will! He’s Private Ryan! He’s Liberace’s lover! He bought a zoo, for god’s sake! Even though Jason Bourne was a killing machine, he and Franka Potente were soooOoOoOo cute together while it lasted. And have you ever seen photos of him on a red carpet with George Clooney? All smiles. Beaming, blissful, happy-to-be-here smiles.

But even though Damon is one of the most lovable and charming people in Hollywood, sometimes he gets angry. He gets angry, and then he yells. And when he yells, our hearts break because we don’t like when he raises his voice. We don’t like it when he widens his eyes and bulges his veins. We don’t like how any of it makes us feel.

No, we don’t like it when Matt Damon yells, but he certainly is good at it. The evidence:

Matt Damon and Ben Affleck won the Best Original Screenplay Oscar for Good Will Hunting exclusively for this dialogue exchange.
Film: Good Will Hunting
Yelled dialogue: “WELL I GOT HER NUMBER. HOW DO YOU LIKE THEM APPLES?”

3. The I’m About To Accidentally Murder You Yell

In this adorable scene, Matt Damon and Jude Law have a fight on a boat. Matt looks absolutely charming with a messy mop of hair and glasses straight out of Warby Parker, while Jude Law and his not-yet-receded hairline are as handsome as ever.
Film: The Talented Mr. Ripley (Click for the clip.)
Yelled dialogue: “YOU WANNA PLAY THE SAX. YOU WANNA PLAY THE DRUMS! WHICH IS IT, DICKIE? WHAT DO YOU ACTUALLY PLAY?”
Featuring the bonus yell: “STOP IT! DICKIE! STOP! STOP! STOP! STOP! STOP!”

This is a master class in yelling that features two of Hollywood’s most impressive yellers Matt Damon (as Bad Will Hunting) and Leonardo DiCaprio (as Leonardo DiCaprio) yelling at each other on a roof in Boston.
Film: The Departed
Yelled dialogue: “I WAS A RAT? FUCK YOU. PROVE IT.”

5. The First Stage Of Grief Yell

After discovering that his cheating, selfie-obsessed wife died before the second reel, Matt Damon struggles to deal with the fact that he will no longer be receiving the Goop newsletter.
Film: Contagion
Yelled dialogue: “SHE DIDN’T HAVE HERPES. WHAT ARE YOU TALKING ABOUT? WHAT HAPPENED TO HER?”​

(Bobby Finger's Tumblr was named the Village Voice's Best Blog of 2012. You should follow it. - The Editors)